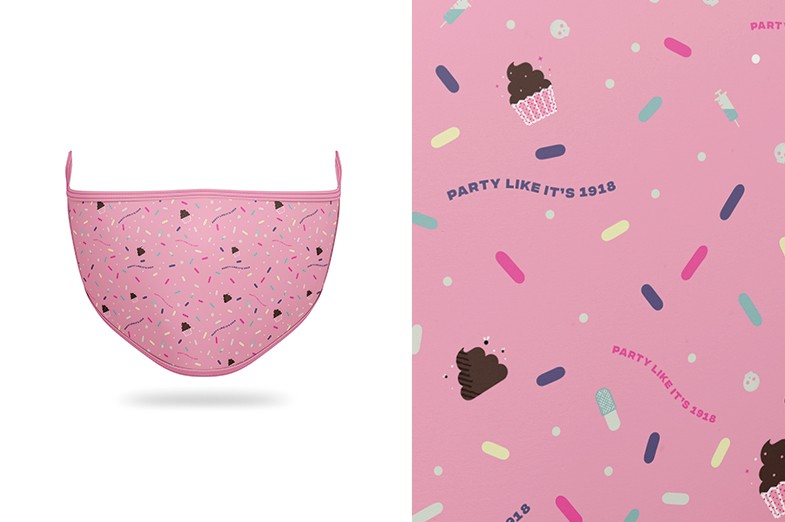 UNIVERSITY PARK, Pa. — Ryan Russell, associate professor of graphic design in the Stuckeman School, earned a Graphic Design USA (GDUSA) award as part of its 58th annual showcase for his “Mind Your Mask” campaign, which was designed to generate public interest and encourage healthy habits, such as social distancing, during the COVID-19 pandemic.

According to Russell, the design incorporates textiles that can be applied on face masks and a variety of other apparel. The textiles are a tongue-in-cheek series of illustrations and typography that promote healthier habits during the current pandemic. One such example from the series includes a slogan on the mask that reads “Party like it’s 1918,” a spinoff of the “Party like it’s 1999” lyric from the famous Prince song, in reference to the deadly global influenza pandemic in 1918 that was also known as the Spanish Flu.

“The emergence of textile design comes at a critical time as we investigate how textiles and patterns can communicate and express meaning in addition to being a beautiful artifact. The mask acts as a canvas. The illustration, texture, iconography, typography and scale encourage social distance between wearer and viewer.”

Russell hopes to apply the textiles to other apparel such as hospital and medical apparel, equipment and consumer apparel.

GDUSA awards honor the best graphic design work across all media — including print and collateral, branding and packaging, advertising and sales promotion, direct mail and direct response, magazines and books, signage and wayfinding, broadcast and video, internet and interactive, and social media.

Russell has received other awards for his campaigns in the graphic design space. Most recently, his social campaign design titled “Release.Reform” received an honorable mention from the Ecuador Poster Bienal 2020 and was selected for the Fourth Shenzhen International Poster Festival. The design addresses the need for police reform due to the increasing police violence across the nation.