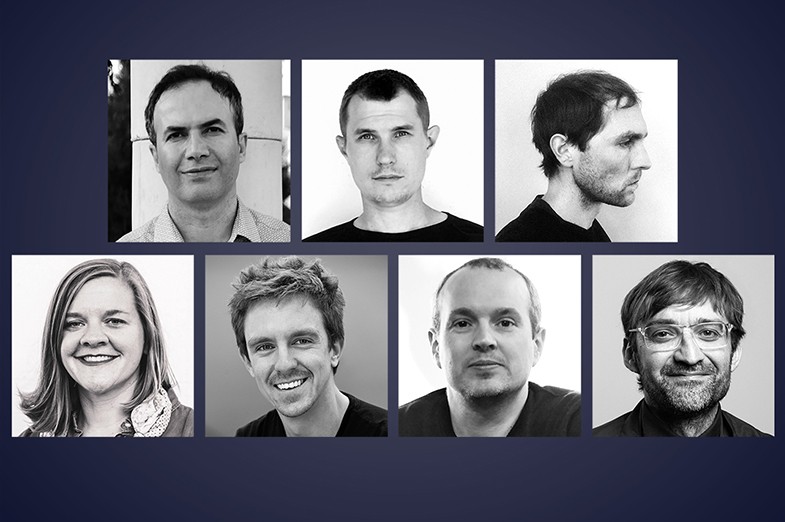 UNIVERSITY PARK, Pa. – The Department of Architecture within the Penn State Stuckeman School is expanding with the addition of five new faculty members this fall.

Rahman Azari has been named an associate professor in the department while Michael Jefferson, Matthew Kennedy, Heather Ligler and Eduardo Mediero will serve as assistant teaching professors.

Azari comes to Penn State from the Illinois Institute of Technology in Chicago where he was an assistant professor in the College of Architecture. In his role, he was nominated by the institution’s provost and recognized as a 2019 “Researchers to Know” by the Illinois Science and Technology Coalition. He also served as the interim director of the architecture doctoral program.

Azari has received national funding for a number of projects focused on façade cladding and building technology from organizations such as the American Institute of Architects, and served as principal investigator on a student research grant funded by the Council for Tall Building and Urban Habitats. A regular presenter at international building design conferences, he has authored numerous journal articles, book chapters and peer-reviewed conference papers on his research. His book, titled “Methodological Issues in Building Technology and Science Research,” is scheduled to be completed by the end of 2020.

A registered architect in Iran and an LEED green associate, Azari is a building performance consultant and he also served as an architectural designer in Iran. His affiliations include the International Building Performance Simulation Association; American Society of Heating Refrigeration and Air-conditioning Engineers; Society of Building Science Educators; and the Iranian Organization of Building Engineering Board.

Azari holds a doctorate in the built environment from the University of Washington and a Master of Architecture from the Sahand University of Technology in Iran.

Jefferson comes to Penn State from the University of Wisconsin-Milwaukee School of Architecture and Urban Planning where he was named the School’s Innovation in Design Fellow in 2019. Prior to that, he held adjunct appointments at The Cooper Union and the City College of New York and was named the 2019 MacDowell Colony Fellow. He served as a lecturer with the Taubman College of Architecture and Urban Planning at the University of Michigan from 2016–2018 and he also taught at Cornell University.

Jefferson is a principal of JE-LE, an architectural design and research office in New York City that has been recognized with numerous international recognitions. The firm won the Sukkah x Detroit Competition in 2018 for its design of the Isaac Agree Downtown Synagogue in Detroit and most recently designed “False Walls,” an installation supported by the University of Wisconsin-Milwaukee School of Architecture and Urban Planning in 2020.

Jefferson has further experience in practice, having served in roles with Adjaye Associates, CODA, Studio SUMO and the Office for Metropolitan Architecture in New York.

He holds a Master of Architecture from Cornell University and a bachelor’s degree in political science and film projection from Indiana University, where he also earned a certificate in liberal arts and management.

An American architect, writer and educator based in Mexico, Kennedy cofounded Cosa – an architecture and design studio operating in Mexico City that explores the interconnectivity of conditions both local and global through the production of architectural interventions, experimental preservation, exhibition design – and research in 2020. Prior to that, he was a project leader in the studio of Frida Escobedo where he led such projects as the 2018 Serpentine Pavilion, 2nd Chicago Architecture Biennial, the 12th Shanghai Art Biennale and the most recent iteration of Exhibit Columbus.

Kennedy and Avíles are editors of the “FAKTUR: Documents and Architecture” journal, which earned a Graham Foundation grant in 2019 and was named a finalist in the Thought and Criticism category of the FAD Awards, Europe’s longest-running architecture and interior design awards, that same year. Kennedy is also the coauthor of “The Advanced School of Collective Feeling,” published by Park Books in 2019.

He earned his Master of Architecture from the Graduate School of Architecture, Planning, and Preservation at Columbia University where he where was awarded the William Kinne Fellows Traveling Prize in 2016. He has a bachelor’s degree in media and mass communications from the University of South Carolina.

Ligler comes to Happy Valley from the Georgia Tech School of Architecture where she worked as an instructional associate and a research assistant in the Shape Computation Lab while pursuing her doctorate in design and computation. She has earned numerous academic honors including the President’s Fellowship and Hambidge Center for the Creative Arts & Sciences Fellowship in 2019. She is on track to graduate with her Ph.D. in fall 2020.

Ligler has worked on numerous funded projects as an investigator and she was a research assistant on a $1,300,000 proposal for a visual database of federal courthouses that was funded by the United States Courts General Services Administration.

Mediero is the founder of HANGHAR, an architecture practice based in Madrid that develops projects ranging from simple product design to housing and urbanism. He also established The Own Foundation, a not-for-profit community development fund that promotes affordable housing through alternative financial and ownership structures, in 2018.

Mediero has experience with several architecture firms – including Johnston Marklee in Los Angeles, Sou Fujimoto Architects in Tokyo and El Equipo Mazzanti in Bogota, Colombia – and his work has been exhibited at the XIV Biennial of Spanish Architecture and Urbanism, the 16th and 15th Venice Architecture Biennales and the Colegio de Arquitectos de Madrid.

He spent last year as a lecturer in the Taubman College of Architecture and Urban Planning at the University of Michigan where he was also named the College’s inaugural Fishman Fellow for his research exploring the material representations of financial capitalism.

Mediero holds Master of Architecture degrees from the Harvard University Graduate School of Design and the Polytechnic University of Madrid, where he graduated with honors.

Peterka came to Penn State in the spring from Atlanta where he has been a project architect with Goode Van Slyke Architecture since 2016. Some of his most recent design projects with the firm include two city fire stations and a new building that will replace an abandoned terminal at Fulton County Airport.

Peterka served in a similar role at Chasm Architecture the year prior and was an architectural intern with Stanley Beaman & Sears Architecture from 2010 – 2015. His projects there included the public concourse layout and wayfinding at the Atlanta Falcons Mercedes Benz Stadium and the expansion and renovation of Ronald McDonald House Charities of Jacksonville, Florida.

Peterka has numerous design awards to his name and has served as a guest juror at the University of Kansas and Kennesaw State University.

He earned his Master of Architecture at Georgia Tech and a bachelor’s degree in printmaking from Ohio State.

Sánchez-Muños is a principal of KAUH Architecture and Landscaping in Granada, Spain, who also joined the Penn State faculty in the spring of 2020. KAUH, which integrates architecture, public space and landscape design, has received numerous awards and accolades, including the Torres Clavé Award from the Official College of Architects of Cádiz for the design of 20 social housing units in Conil de la Frontera. That project also was selected for the 13th Spanish Architecture and Urbanism Biennale in 2015. KAUH also was the recipient of a Málaga Architecture Award from the Official College of Architects of Málaga (Spain) in 2009.

Some of the firm’s more recent projects include a public space intervention titled “Outline of the Nasrid House” within the Alhambra, a palace and fortress complex in Granada, and a family-run hotel in the coastal town of Conil de la Frontera in the province of Cádiz. Construction is also underway of the firm’s urban and infrastructure renewal project of the Utrera fairgrounds in Seville, Spain.

Prior to starting KAUH with Vincent Morales Garoffolo in 2014, Sánchez Muños worked for West 8 Urban Design & Landscape Architecture in Rotterdam, The Netherlands.

He received his architecture degree from the Higher School of Architecture of Seville and his master’s degree in landscaping, gardening and public space from the University of Granada.