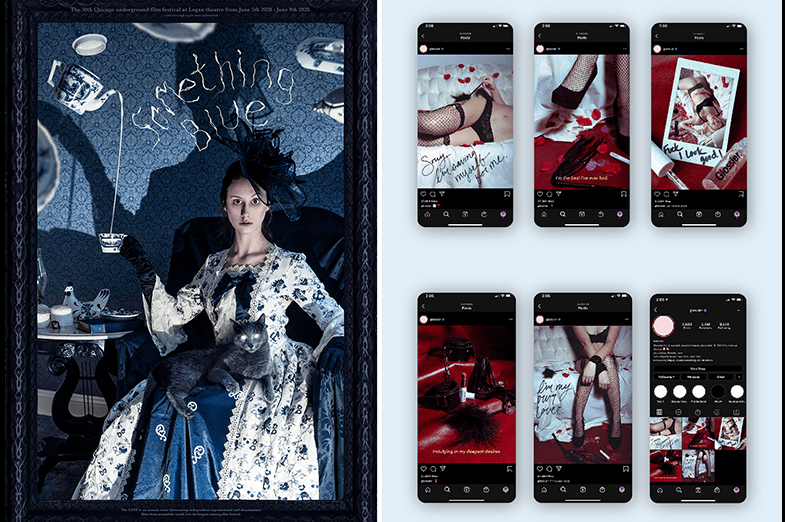 Awards are presented at the platinum, gold and silver levels, as well as honorable mentions, in the Graphis annual showcase of the best student advertising and design work produced in the past year. Design categories include beauty and fashion advertising, book and publication design, branding, exhibits, film/video, illustration, infographics, interaction design, logos, packaging, restaurant concept design, photography, posters and more.

Cassie Luzenski, a fourth-year student, and Shipton earned the top prize in the advertising, beauty and fashion categories for their “Glossier” project.

Second-year student Rachel Smith and fourth-year student Megan Tam were each honored with gold awards. Smith’s “Ocean’s 11”design with Burns was recognized in the book and publication category while Tam’s submission with Shipton was awarded in the photography and portraits category.

Taylor Mazzarella, a fourth-year student, earned gold and silver awards: gold for her film title sequence with Ryan Russell, associate professor of graphic design, in the film/video and film title categories, and silver with Shipton in the design and editorial categories. She also earned two honorable mention awards; one with Shipton in the poster category and the other with Russell in the interaction design category.

Fellow fourth-year student Amber Lai earned a silver award for her submission with Russell in the film video and film title categories, and an honorable mention award, again with Russell, in the interaction design category.

Ron Feinburg and Jackie Siry, both fourth-year students, were each recipients of silver awards for their submissions with Burns and Shipton, respectively.

All of the projects selected for 2021 New Talent Awards can be found on the Graphis website.

A new book co-edited by Rahman Azari, associate professor of architecture, offers a variety of perspectives and first-hand experiences from scholars and experts in building science

Eleven College of Arts and Architecture students received Student Engagement Network grants this fall to fund a range of projects including a play, a film, travel, and more.