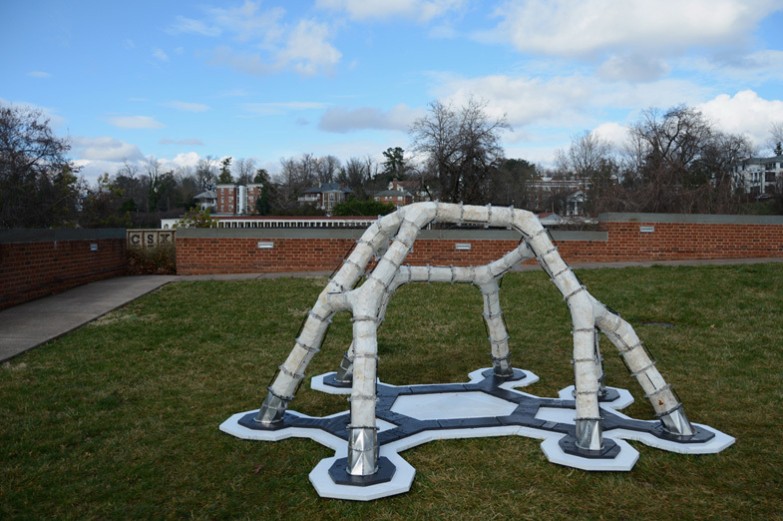 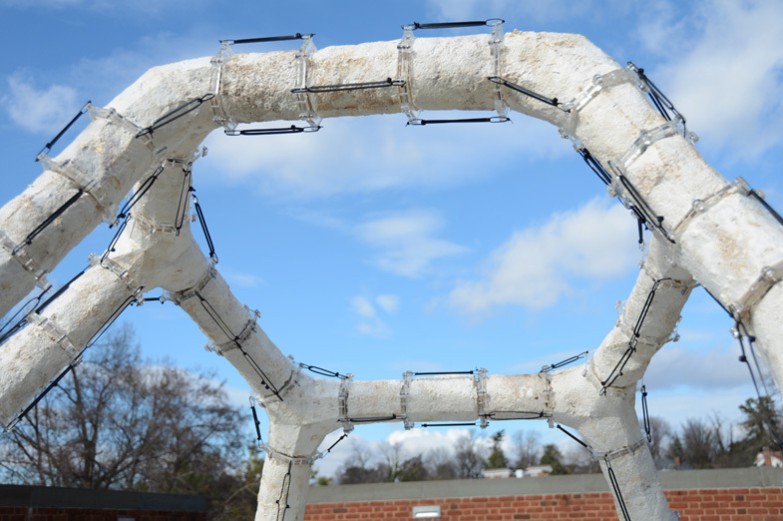 UNIVERSITY PARK, Pa. — The work of Penn State architecture researchers using mycelium, which comes from the root of fungi, to advance the study of biodegradable building composites is featured in the Biomaterial Building Exposition on the University of Virginia (UVA) campus through April 30.

Benay Gürsoy, assistant professor of architecture in the College of Arts and Architecture’s Stuckeman School, leads the team of researchers from the Stuckeman Center for Design Computing (SCDC) Form and Matter (ForMat) Lab that has been exploring how to cultivate mycelium-based composites, which require less energy to make than conventional building materials, for structural use. As a result, the lab developed the “MycoCreate 2.0” project, which has been awarded funding from the American Institute of Architects.

Penn State is one of five universities that was invited to install full-scale installations on the UVA campus in Charlottesville, Virginia that were developed at the architect-scholars’ home institutions.

“The ultimate goal of this research is to lower the growing carbon footprint of the building industry, which currently contributes greatly to global carbon emissions and landfill waste around the world,” said Gürsoy.

The ForMat Lab in the SCDC focuses on computational making and material computation, exploring how material manipulation in design — whether carried out by hand or by digital tools — can become an integral part of the computational design process.

Gürsoy and ForMat Lab researchers Ali Ghazvinian, an architecture doctoral candidate, and Alale Mohseni, an architecture master’s degree student, traveled to Charlottesville on March 11 to start the two-day installation of compression-based structure, which measures approximately 10 feet long, 8 feed wide and 6 feet high. Fabrication of the 64 unique load-bearing mycelium-based components of the project, however, started in the fall 2021 semester with a design research studio instructed by Gürsoy and Ghazvinian.

The MycoCreate 2.0 structure is crucial to Ghazvinian’s doctoral research, and Ghazvinian had “an instrumental role in its conceptualization and realization,” said Gürsoy.

Ghazvinian is working on enhancing the mechanical properties of mycelium-based composites by investigating the factors that affect their nature and growth. Crucial to his research has been the ForMat Lab team’s collaboration with the Mushroom Research Center at Penn State.

“Based on the constraints and affordances of the cultivated mycelium-based composites, and the outcomes of mechanical tests, we are developing compression-based structural systems using computational form-finding techniques, generative design and optimization methods,” said Ghazvinian.

Gürsoy also presented her lab’s research at the accompanying Biomaterial Building Symposium, which was held on March 14 in conjunction with the exhibition opening.

“It was great to showcase our research efforts at ForMat Lab on mycelium-based biofabrication and connect with other researchers and designers working with biomaterials,” said Gürsoy.

The Biomaterial Building Exposition seeks to establish a multi-institutional scholarly discourse and raise the public visibility of novel approaches to biomaterial construction. Katie MacDonald and Kyle Schumann curated the exhibition, which is hosted by the UVA School of Architecture and funded by The Jefferson Trust and the Center for Global Inquiry and Innovation.The event has garnered quite a bit of media attention this spring with stories appearing via Archinect, UVA Today and Inform Magazine.