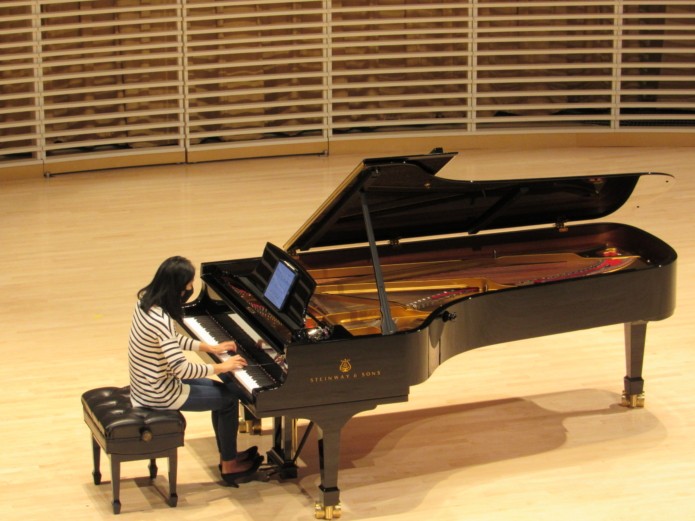 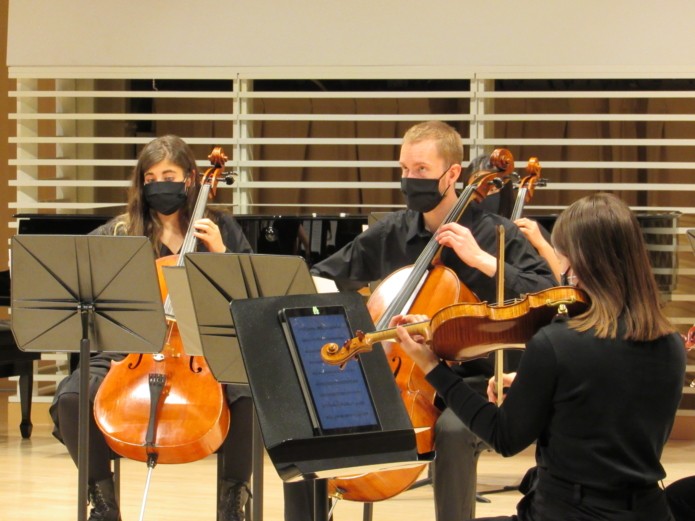 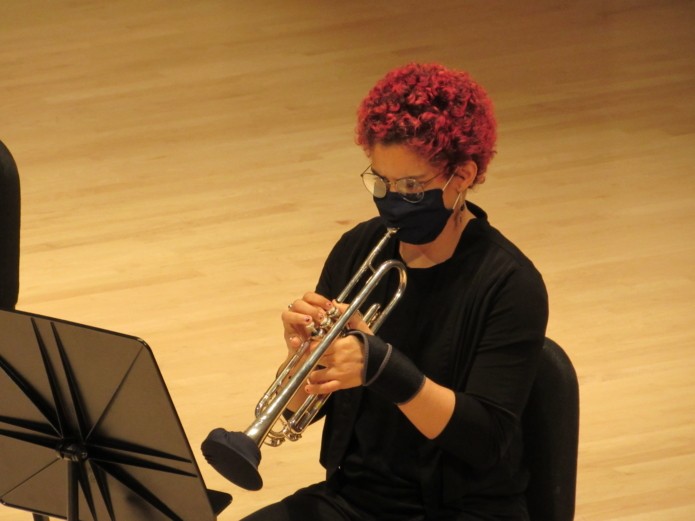 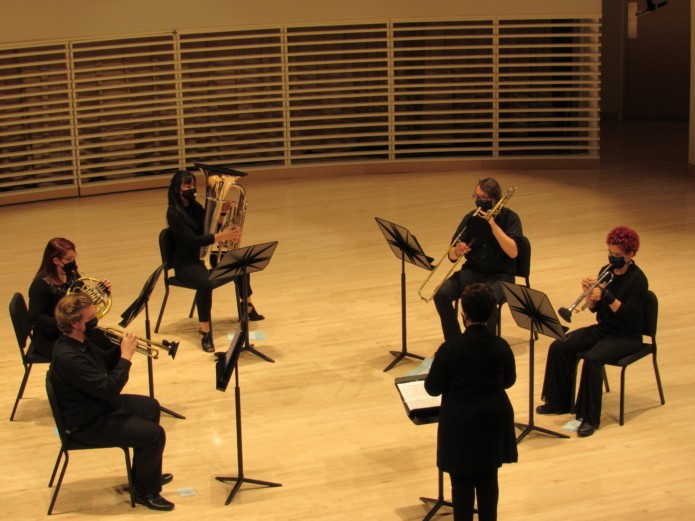 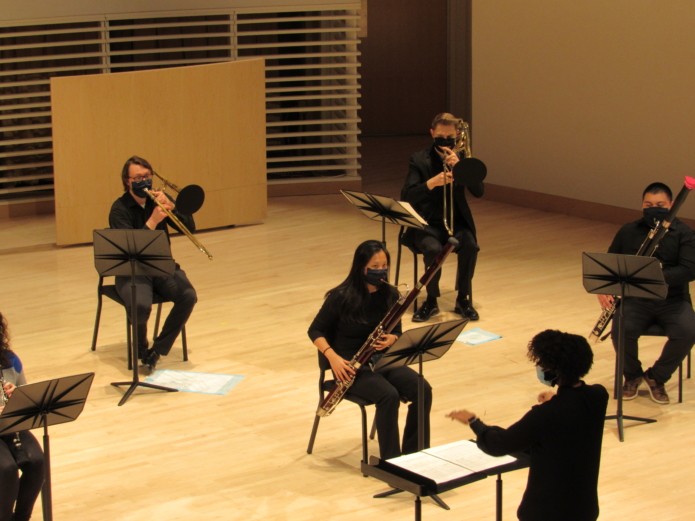 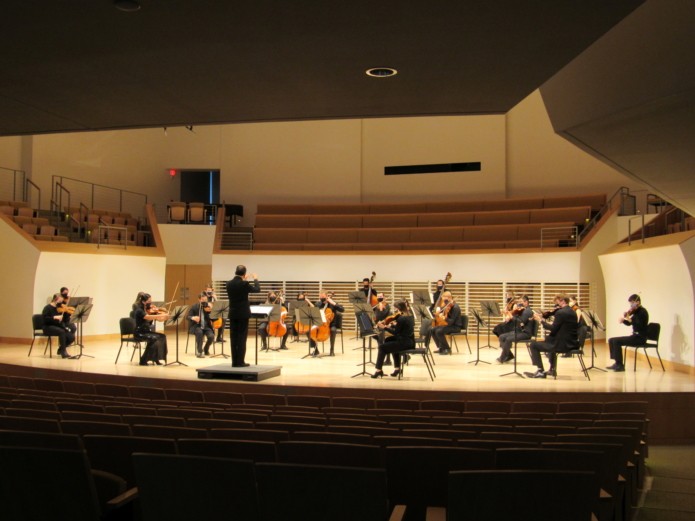 The Penn State New Music Festival and Symposiums occured vitrually on March 19-20, 2021. A festival likes this creates a hub for new music performance, research, composition, and networking. This two-day event brought composers, scholars, and performers from around the world together with the Penn State music community for a series of concert events and research presentation sessions. Virtually every Penn State School of Music ensemble and studio was involved in this school-wide event that connected our student and faculty performers to composers from a variety of backgrounds and locations. From esteemed professors to graduate students, the festival participants represented the wide range of contemporary composition and new-music-focused research taking place today. While Penn State musicians are constantly engaged in new-music collaborations on campus, the Penn State New-Music Festival and Symposium provided an unparalleled opportunity for our community to be immersed in the music of our time.

The festival is not only focused on sharing performances of new works, but also on research and thought related to contemporary music topics. This includes music theory, musicology, ethnomusicology, composition, electronic music, interdisciplinary arts, philosophy, etc. The festival format alternates between research presentation session and concert events which provides a more technical and contextual insight into contemporary ideas and thinking followed by performances of contemporary works. The research presentations give attendees a complete picture of the current state of the art from the development of compositional systems and languages to cultural considerations to the final performance of a composition. The full two-day program can be found at this link.

Taking part in the Penn State New Music Festival provided me with opportunity to interact with musicians and composers form all over the world. I was able to hear concerts and talks from these artists, and even engage directly with them over zoom.”  -Tucker Johnson (BM Composition ’21)

Holding the festival virtually was challenging but worthwhile. While an in-person festival would have the benefit of the guest composers working more closely coaching the ensembles and performers of their music, and Penn State student composers spending more informal time networking with these composers, the virtual festival allowed more international participation since composers and scholars abroad were not deterred from participating by the financial and logistical constraints of traveling to our campus for the event.

“Hosting a festival like this provides an opportunity that otherwise wouldn’t exist, said Assistant Professor of Music Baljinder Sekhon. This opportunity allows Penn State student and faculty musicians and scholars to network with composers and scholars of cutting-edge new music and research from around the world. In addition to the exposure and engagement that is crucial for our musicians on the Penn State campus, the festival also provides an opportunity to share the first-rate work by our students and faculty on a global stage. Finally, the festival itself is not the end goal, but rather a springboard for future collaborations between Penn State musicians and the festival participants.” One example of this from the 2021 festival is the continued collaboration between School of Music’s student flute quartet and Canadian composer Laura Pettigrew. After hearing the outstanding performance of her work Selene (Goddess of the Moon), Pettigrew invited the Penn State student flutists to record this work for her upcoming commercial recording release of her music. In addition, to the recording, our student flutists will be heard on radio stations worldwide. From just this one piece, these student performers will be heard on a new commercial album, our studio engineers will receive commercial release credit as recording engineers for the album, and listeners from around the world will be exposed to the outstanding work being done at Penn State. “These ripples that extend out from the festival event are the most impactful results from the Penn State New-Music Festival and Symposium; the flute quartet’s invitation is just one example and we certainly expect to see many more opportunities arise from this,” Sekhon continued.

Amber Lucas (’22), a performance major in clarinet said, “participating in the 2021 Penn State New Music Festival was a very formative experience for me as a performer and future music educator.  The music I performed allowed me to develop my skills as a clarinetist, and the concerts provided the opportunity to learn about composers and pieces that I had never knew before. I am so thankful to have had the opportunity to participate in this festival, and I am excited to continue my studies of new music.”

The call for scores and research presentations was announced publicly in summer 2020. For the call for scores, there were 20 different categories that composers could submit. These categories ranged from electronic music to chamber music to orchestra and wind ensemble. For each category there was review team headed up by faculty members representing each category. 19 faculty members were involved in organizing the review of the composition submission, often time including graduate student performers in that process. The student club, Living Music, assisted in reviewing the mixed chamber and solo submission headed up by Dr. Baljinder Sekhon, and Penn State ROARS (Research of Arts, Recording, and Sound) assisted in reviewing the electronic music submissions headed up by Dr. Steven Rice. The other categories were headed up by the respective faculty member who would ultimately be directing, coaching, or performing works from their category. Each review leader sent their recommendations for programming to Dr. Sekhon and a programming committee was formed to create the final concert programs. With 535 submission, there were obviously many great works that could not be programmed because of limitations on logistics and concert durations.

The Penn State New Music Festival and Symposium was an enlightening experience that allowed me to interact and learn from a diverse group of composers and scholars with a variety of cultural influences in their music. This festival encouraged me to think deeply and critically about my own music and listen to the music of others through a more worldly perspective.”  -Leah Mullen (BM Composition ’22)

There were 45 guest composer and scholar participants in the festival, selected from a pool of 535 submissions. Of the 45 selected participants, 27 are either university professors, freelance composers, or independent researchers, and 18 are currently composition students in programs from around the world. Since this festival is conceived of and designed more like an academic conference, the majority of participants tend to be university professors. In addition to those participants, just over 100 audience members for the research presentation sessions and over 700 audience members for the concert events attended the virtual sessions. The attendees ranged from faculty and student members of the Penn State music community as well as 800+ audience members from around the world who “tuned in” virtually.

Baljinder Sekhon II scored the ballet "Dreamer," in collaboration with the Eastman School of Music and Garth Fagan Dance.

The Center for the Performing Arts welcomes students and community members back to live events with “Love Will Be thee Only Weapon,” a free concert by Mwenso and The Shakes.