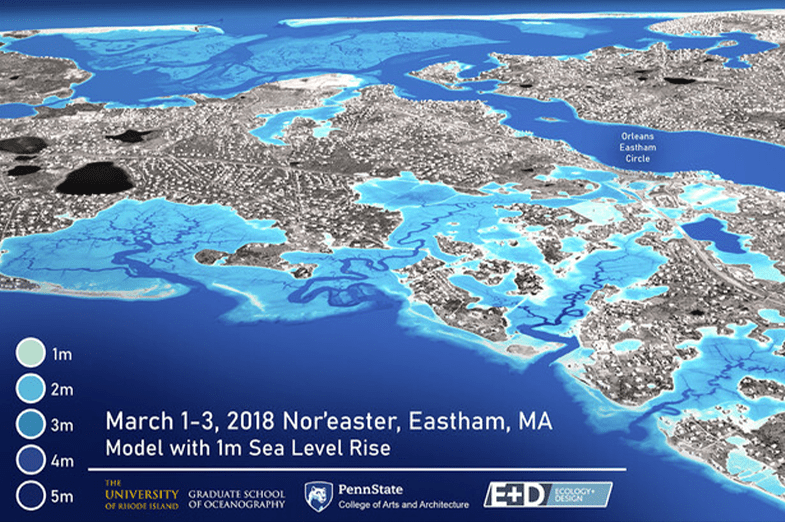 UNIVERSITY PARK, Pa. — A Penn State researcher is part of a research team that was awarded a four-year, $1.5 million grant through the National Oceanic and Atmospheric Administration to study the effects of sea level rise and how it may exacerbate the impact of extreme weather. The overall goal of the project is to help communities adapt and improve their resilience as climate continues to change and extreme weather such as hurricanes and nor’easters continue to increase in terms of frequency and severity. The lead institute for the project is the University of Rhode Island.

Peter Stempel, an associate professor in the Stuckeman School’s Department of Landscape Architecture and a cofunded faculty member in the Institutes of Energy and the Environment, said this project is a cornerstone in his larger research program to communicate coastal science more effectively to diverse stakeholders.

“Penn State’s involvement speaks to the unique bridging role my work plays between physical science and extension activities. It extends multiple collaborative relationships that I established during my dissertation research,” Stempel said. “My role centers on bridging between science and stakeholders through the creation of scientifically credible realistic 3D visualizations that make the science relatable and tangible to audiences.”

According to NOAA, the rate of sea level rise is accelerating. Since 1993, the average global sea level has increased by 3.4 inches. By the end of the century, it is likely to rise at least one foot over 2000 levels. Sea level plays a role in flooding, shoreline erosion, and other hazards, affecting nearly 40% of the U.S. population living in high-population density coastal areas. However, despite what is known about sea level rise, there is a lack of research available when it comes to how the impacts of nor’easters and hurricanes may be amplified as a result.

“There are a number of studies that have been done looking at just sea level rise or just extreme weather, but what we’re really lacking in terms of clear understanding is the combined impact of these two phenomena,” says Isaac Ginis, professor of oceanography at the University of Rhode Island, who is leading the study. “This is especially important to us on the East Coast and in New England, where we’ve seen significant coastal flooding produced by waves and storm surge during nor’easters and hurricanes. How these effects are amplified by sea level rise has been largely unexplored. This information gap inhibits our ability to properly plan for the future and is likely to lead to under-informed and ineffective adaptation measures.”

The project was supported by all four members of Rhode Island’s congressional delegation and received letters of support from more than 15 local communities.

Using state-of-the-art atmosphere, storm surge and wave/erosion modeling, the team will provide high-resolution recreations of the impact of future storm and sea level rise scenarios, identifying vulnerabilities in the ecosystems and infrastructure of the identified sites and their adjacent communities. The modeling will also include hazard, risk and adaptability assessments as well as mitigation scenarios.

Researchers will work closely with stakeholders at the community level to tailor the research and translate the science in a way that can be incorporated into local resource management and adaptation measures to improve coastal resilience and to protect communities, people and infrastructure, and their ecosystems.

“Each community has their own needs,” says Ginis, “but our modeling results will produce tangible information for local decision makers — state and local governments, emergency management officials, town and city planners and other stakeholders — to address their specific needs and enable them to plan and adapt as the sea level rises and climate continues to change.”

Ultimately, the project will open an important dialogue between researchers and local stakeholders, developing practical and well-informed, science-based best practices that will guide future policies and resource management strategies to protect our coastal economic, environmental and community resources.

Other collaborative participants in the project include the Schoodic Institute and the National Park Service.