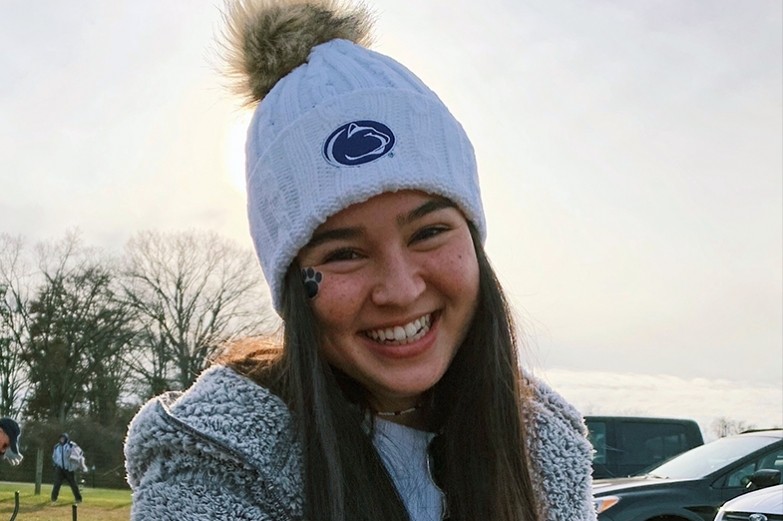 Meet Kimi Mate, the student designer behind the THON 2021 logo

Her inspiration behind the logo draws from those who have been affected by pediatric cancer and the support that Penn State THON gives to the Four Diamonds community throughout the year.

THON is the largest student-run philanthropy in the country, and Mate’s design will soon be the face of Penn State’s efforts.

“I am so honored that my logo was picked for such a large organization because of the positive impact it has on people’s lives,” she said.

Mate’s logo focuses on the joyful and lighthearted atmosphere of the event itself and conveys the unity that THON creates in the Penn State community.

“My logo tries to draw upon the idea of going on a journey together and creating this new experience. It’s supposed to be a big adventure,” she said.

Taylor Shipton, one of Mate’s instructors in the Department of Graphic Design, knows her student both inside the classroom and out.

THON, to me, means supporting everyone who has been affected by childhood cancer and letting them know that they are not alone.” – Kimi Mate

“Kimi definitely excels in the Graphic Design program and as a designer in general,” Shipton said. “She always has this inner enthusiasm when it comes to her thought process and her work, as well as just her baseline personality.”

Mate’s interest in graphic design stems from her love of art. She took art classes in high school but later decided she didn’t want to pursue her college education in the fine arts. With the Graphic Design program at Penn State, she is able to create art but from a communications perspective.

“It’s problem-solving and trying to figure how you can communicate something visually,” she said.

When it comes to her career, Mate is still deciding which path she wants to take with her graphic design education.

“I like all of [graphic design], so I’m not sure what I want to do yet. I think that’s something so cool about the major, you have so many options,” she said.

Mate’s Penn State journey began when she came to visit campus from her hometown of Glen Rock, New Jersey, and she had the valuable opportunity to speak to a few of her future professors.

“I fell in love with the campus and I loved seeing the graphic design students working in studio, too,” she said. “It just felt like this is where I should be.”

Corey Gracie-Griffin, an affiliated faculty member within the Hamer Center for Community Design, was recently honored by the ACSA with a 2021 Architectural Education Award.