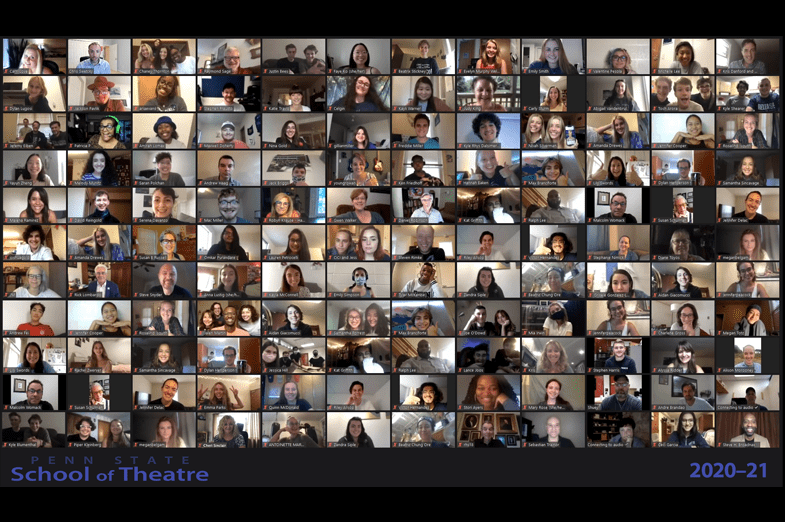 When preparing for theatre education in the midst of the COVID-19 pandemic, School of Theatre administration, faculty and staff knew that the 2020-2021 academic year presented unprecedented challenges. But the group leaned on a time-honored industry tenet to guide the way—theatre people are problem solvers.

Shortly after the end of the spring 2020 semester, the school’s pandemic leadership group began to work on a plan for the next academic year. The science of the virus in relation to the performing arts was becoming clearer, and front and center was the reality that acting, singing and dancing in a theatre was considered a super-spreader scenario.

While sharing scientific information with School of Music colleagues, Rick Lombardo, director of the School of Theatre, became familiar with bioaerosol emissions, which are small airborne particles produced by living organisms and suspended in the air.

“At that point we knew that every aspect of what we do would be somehow compromised,” Lombardo said. “However, we worked through the summer to revise curriculum, how instruction would be delivered and every aspect of our modes of creating productions.”

Chris Swetcky, assistant professor of theatre technology production and the school’s technical director, is part of the school’s pandemic team. Guided by bioaerosol emissions science and working closely with the School of Music COVID committee and the Office of Physical Plant, he helped to analyze the school facilities’ HVAC systems and reorganized learning spaces that complied with the Penn State room capacity requirements.

Crystal Dahm, a senior majoring in theatre design and technology and applied French, said that the school’s embrace of science and technology has allowed for a unique educational experience, sometimes in an unusual place.

“In my mind, the most effective COVID learning transition has been the opportunity for technical direction students to take one-on-one classes in our scenic construction shop,” Dahm said.

While not online, this is an opportunity we never would have had in a normal year.”
-Crystal Dahm

Dahm noted the student-run show titled “The Alexa Project,” an immersive light and sound projection experience in the Playhouse, as an example of how students are manufacturing opportunities to practice their craft.

Collaborating with Swetcky to prepare spaces for students to learn, grow and employ their talents was Dan Robinson, School of Theatre associate director for academics and head of the design and production programs.

“Dan was a logic puzzle mastermind at figuring out where all the classes should go,” Swetcky said. “I worked with my team on converting all our theatres into classrooms to accommodate the need for larger instructional spaces.”

The first step, Swetcky said, was determining the number of HVAC air exchanges that happened per hour in all of the school’s spaces. Armed with that information, HVAC systems were modified to bring in only outside air and to run for longer periods of time in an effort to recycle the building’s air up to four times per hour instead of the normal one or two times per hour.

In the rooms where the modifications were not possible, portable air filtration units were installed to ensure three air exchanges per hour. Additionally, all HVAC filters switched to Environmental Protection Agency-recommended filters that capture viral contaminants in the air.

The school also implemented a strict 30-minute rest period between classes or events in each space to allow the room to “breathe,” Swetcky said.

With safe educational and performing spaces, the school was able to move forward with a combination of in-person, hybrid and remote classes, all bolstered by technical ingenuity.

Using singers as an example, Swetcky said the school did several things to overcome the challenges. All students in the Musical Theatre Program received a high-end USB microphone to increase the overall quality of their digital singing experience. In addition, the school built a no latency remote singing studio by converting a room in the Theatre Building into a voice studio that includes a video camera and monitor system.

The studio was connected to a voice faculty member’s office, which was fitted with similar equipment. The system used analog technology, meaning that the voice teacher could hear a perfect reproduction of the singer’s voice, see them singing and respond in real time with no delay or quality degradation, according to Swetcky.

Despite the technological improvisations, Lombardo said the school knew that the traditional fall performance season was going to be lost, but leadership remained determined to offer performance opportunities by building on the success in April of Penn State Centre Stage Virtual.

The quickly formed initiative and the school’s continued devotion to student success has led to new ways of teaching, learning and creating, Lombardo said. But as the semester has progressed, it has been the student’s approach to adversity that he finds “inspiring.”

“Our students have shown enormous resiliency to suddenly finding themselves taking performance and design classes from their dorms and apartments,” Lombardo said. “Theatre people are inherently problem-solvers. Our art form continues to adapt over the years, incorporating new ideas, techniques and technology, and this spirit has helped us through these months.”