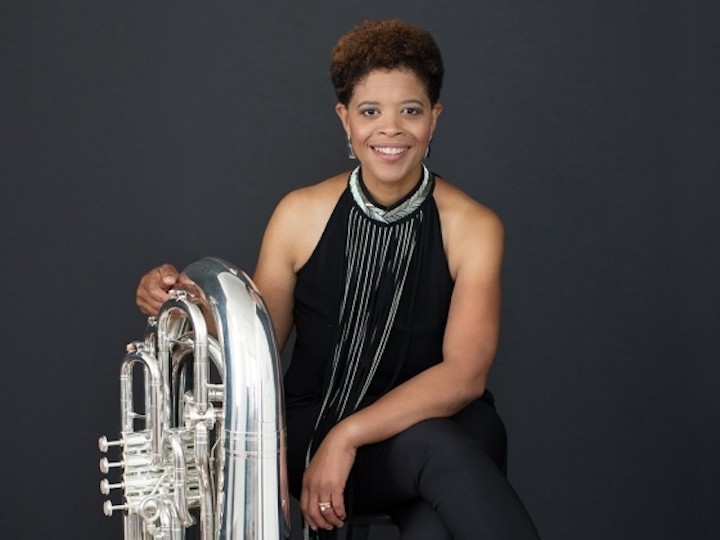 Congratulations to Professor Velvet Brown, who has been named one of Penn State’s newest Distinguished Professors, the highest honor awarded to faculty members.

Brown is professor of tuba and euphonium at Penn State. Prior to joining the School of Music faculty in 2003, she taught at Bowling Green State University (Ohio) and Ball State University (Indiana), and served as an associate director of University Bands at Boston University.

She enjoys a professional career as an international soloist, chamber ensemble performer, recording artist, conductor, and orchestral player. She has made regular appearances throughout Italy, Switzerland, Austria, Germany, Finland, France, England, Hungary, Slovenia, Russia, Japan, Canada, and the United States. Many of her successful students have won prestigious playing and teaching positions and are prize winners at various regional, national, and international competitions.

Brown is currently the principal tubist of the New Hampshire Music Festival Orchestra and the Altoona Symphony Orchestra. She has served as principal tuba with the River City Brass Band, guest principal with the Lahti Philharmonic in Finland, and as substitute or additional tubist with the Detroit Symphony, Saint Louis Symphony, San Francisco Women’s Philharmonic Orchestra, and the Fort Wayne Philharmonic. In 2004, Brown joined Howard Johnson’s “Gravity” Tuba Jazz Ensemble as lead tuba. She has also garnered high praise as a founding and current member of Stiletto Brass Quintet, Monarch Brass Quintet and Brass Ensemble, the Junction Tuba Quartet, and the Pennsylvania Brassworks. Moreover, she is also a founding board member of the International Women’s Brass Conference.

She has released four solo CDs, and has collaborated on several other recordings as a soloist and ensemble member, including the April 2013 release of Stiletto Brass Quintet with Doc Severinsen. Also notable is her interpretation of John Williams’ Tuba Concerto on Albany Records. Brown is a Besson/Buffet/Melton/Meinl Weston Performing Artist, performing on the MW 2250 and 2182 F tubas, and the MW 2000 C tuba. She is also a performing artist for Denis Wick mouthpieces and mutes.

The Distinguished Professor title is reserved for current, full-time, active faculty members who hold the rank of Professor; do not currently hold an endowed chair, professorship, or faculty fellowship; and are acknowledged leaders in their fields of research or creative activity. Their national and international leadership is documented by notable contributions to research published in leading journals and/or books and creative accomplishments widely recognized for excellence; prestigious awards and citations; and a substantial record of invited lectures or performances delivered at prestigious institutions. These individuals also demonstrate significant leadership by raising University standards with respect to teaching, research or creative activity, and service; cultivating excellent teaching skills; and contributing significantly to the education of students who later are recognized for excellence in their fields.

The Penn’s Woods Music Festival will take place June 11-25 on the Penn State University Park campus, kicking off June 11 with Music in the Gardens at the Arboretum.