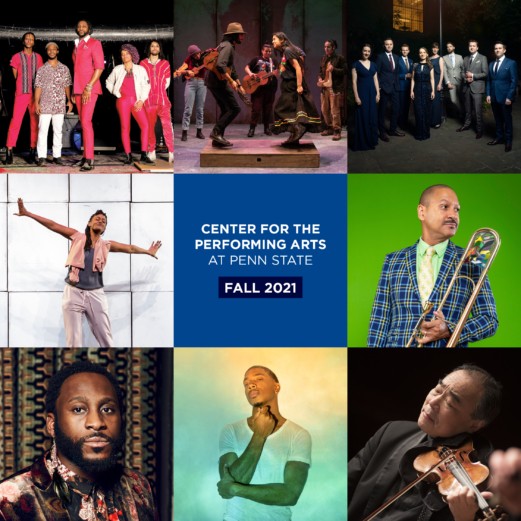 After more than a year of COVID-wrought uncertainty and a season of experimenting with virtual events, “I am delighted to share that we plan to return to in-person presentations in September,” Center for the Performing Arts Director Sita Frederick said.

To welcome audiences back for fall, the center will present a mix of live and “Up Close and Virtual” presentations, including jazz, classical music and theater. Visit Center for the Performing Arts online for information about the events.

Tickets will go on sale starting at noon Wednesday, Sept. 1. Tickets will be available to purchase online, by phone at 814-863-0255 and in person at Eisenhower Auditorium (weekdays noon to 4 p.m.).

A return engagement of multigenre jazz-funk-dance ensemble Mwenso and The Shakes will kick off the fall. At 7:30 p.m. Thursday, Sept. 16, the arts activist and music historian will return with his New York City-based band for the concert “Love Will Be thee Only Weapon.” Kikora Franklin and dancers will open the event, which will be on the Eisenhower Auditorium patio.

Starting Monday, Sept. 20, Mwenso will continue his “Meeting the Moment” artist discussion series with a free streamed episode featuring guest B. Stephen Carpenter II, dean of Penn State’s College of Arts and Architecture, in the second meeting of their minds and the ninth program since the series’ inception in 2020.

The theatrical presentation of En Garde Arts’ “Fandango for Butterflies (and Coyotes)” will commemorate Hispanic Heritage Month with a live, in-person performance at 7:30 p.m. Thursday, Sept. 30, in Eisenhower. “Fandango” is inspired by interviews with undocumented immigrants from Latin America and will include a pre-show “Artistic Viewpoints” discussion with En Garde Arts’ founder and artistic director Anne Hamburger.

British a cappella ensemble VOCES8 will return to Penn State with a performance at 7:30 p.m. Tuesday, Oct. 12, in the School of Music’s Recital Hall. The “After Silence” program will include works by Claudio Monteverdi, Thomas Tallis, Arvo Pärt, Benjamin Britten and others, and will feature the Penn State Concert Choir, directed by Christopher Kiver.

After being presented as a School-Time Virtual event during the 2020 spring season, “Cartography,” conceived and created by Kaneza Schaal and Christopher Myers, will return as a live performance at 7:30 p.m. Thursday, Oct. 14, in Eisenhower. Through visual mapping and other multimedia tools, “Cartography” reveals the distance migrants have traveled — physically and mentally — and their connections to people around the world.

Schaal, also the production’s director, will join a moderated pre-event “Artistic Viewpoints” discussion. After the performance, Schaal and cast members will engage in a moderated discussion with interested audience members.

Jazz pianist Christian Sands will follow up last season’s virtual performance with a live concert at 7:30 p.m. Wednesday, Oct. 27, on the Eisenhower stage. Sands and his band — brother Ryan Sands on drums, Yasushi Nakamura on bass and Marvin Sewell on guitar — will perform songs from his latest release, “Be Water,” including the Grammy Award-nominated instrumental song “Be Water II.”

A variety of free in-person engagement events are being planned and will be listed on the center’s website when details are finalized.

Penn State has issued rules and precautions that follow, or might exceed, guidance from the Centers for Disease Control issued in response to the COVID-19 pandemic. Patrons can visit Penn State Event Attendance Policies prior to attending an event to ensure they are familiar with the rules and expectations.

The Mwenso and The Shakes appearance is part of the center’s Fierce Urgency Festival. Aimed at celebrating Black artists and art forms, the festival has a theme of “Hope-Resist-Heal” in its second season.

“Fandango for Butterflies (and Coyotes)” and “Cartography” are part of “The Reflection Project,” funded by The Andrew W. Mellon Foundation.

This engagement of “Cartography” is made possible through the ArtsCONNECT program of Mid Atlantic Arts Foundation with support from the National Endowment for the Arts.