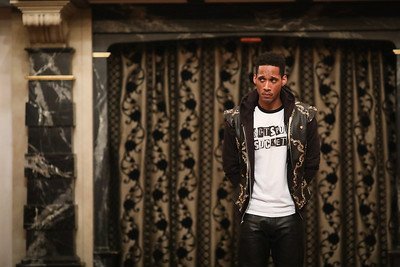 Penn State Theatre alumnus Brandon Carter (’14 M.F.A.) has been named the artistic director of American Shakespeare Center (ASC). A resident actor with ASC since 2018, he is the first person of color to lead the 34-year-old company, located in Staunton, Va.

A Virginia native, Carter has collaborated in more than 40 roles at ASC, including making history as the first Black man in the United States to play Prince Hal and King Henry in the “Henry IV” and “Henry V” cycle. He will continue to act, beginning in February as Romeo in “Romeo and Juliet,” to be directed by José Zayas. He previously served as ASC’s interim director of artistic development and as actor-manager.

Carter was an original cast member and production manager of Dominique Morisseau’s “Blood at the Root,” which premiered at Penn State under the direction of School of Theatre faculty member Steve H. Broadnax III. The play won the Graham F. Smith Peace Foundation Prize for its promotion of human rights.

Prior to joining ASC, Carter served as an artistic associate and actor with the Classical Theatre of Harlem (CTH), appearing in productions such as “The Tempest,” “Macbeth,” “The First Noel” and “The Three Musketeers.” Other Off-Broadway credits include “Drunk Shakespeare NYC” as Macduff, and “Black Angels Over Tuskegee” as Theodore.

Carter’s expertise and passion is classical work. According to the ASC website, his mission is to “break the legacy” and culture surrounding the classics by creating a symbiotic relationship between classical texts and innovative voices.

In addition to his M.F.A. from Penn State, Carter holds a B.A. in Theatre and Communications from Longwood University.