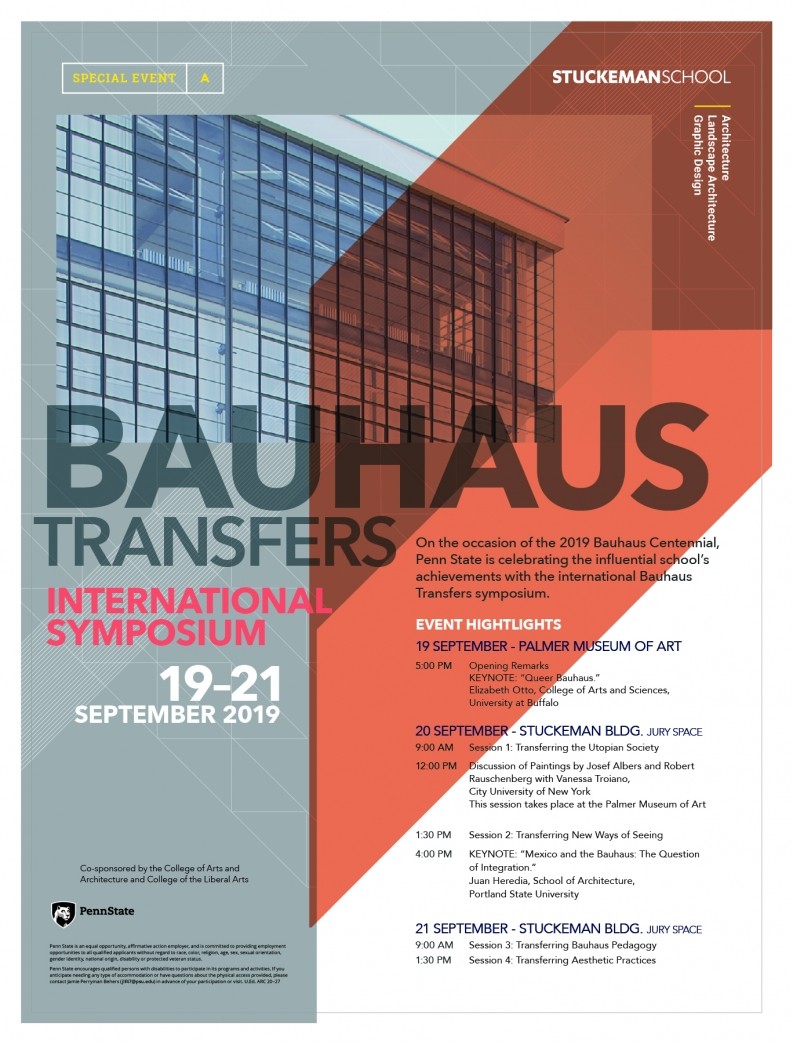 UNIVERSITY PARK, Pa. – More than a dozen international scholars will converge on the arts district at Penn State University Park this month to celebrate the teachings of the Bauhaus and to reflect on the immense impact the famous German art school has had on modern design, art and architecture over the past 100 years.

The Bauhaus Transfers international symposium will be held Sept. 19-21 at the Palmer Museum of Art and the Stuckeman Family Building. The event has been organized by Ute Poerschke, Stuckeman Professor of Advanced Design Studies in the Department of Architecture, and Daniel Purdy, professor of German studies in the Department of German and Slavic Languages and Literature at Penn State.

Founded in Germany in 1919 by architect Walter Gropius, the Bauhaus was designed to be an inclusive creative school that brought all forms of the arts together – design, architecture and the applied arts. The school, which operated in three German cities, aimed to reunite fine art and functional design to reach the masses, not just the elite.

Forced to close in 1933 under pressure from the Nazi regime, the Bauhaus became renowned for its faculty members, who subsequently led the development of modern art – and modern thought – to different areas of the world after the school’s doors were shuttered.

According to Poerschke and Purdy, the Bauhaus approach to teaching and understanding art’s relationship to society and technology continues to have a major impact in Europe, the United States, Mexico, Russia, China, Australia and around the world.

“If you want to understand what it means to be modern and forward thinking, then the papers presented in this conference should appeal to you,” said Purdy. “We will also have some discussions about gender, sexuality and queerness at the Bauhaus.”

Poerschke said that the event would be well suited for anyone interested in a wide variety of topics including painting, theater, graphic design, music, architecture, textile arts, philosophy, politics, industrial design and fabrication, and much more.

The organizers hope that attendees will take away from the interdisciplinary event the ability to recognize the liveliness and diversity inherent in the Bauhaus and its visible influence around the world.

“There is, of course, an established history of the Bauhaus architecture, which is well known,” said Purdy. “But this conference will reveal all sorts of overlooked and forgotten aspects to the Bauhaus legend.”

Also important is the recognition of celebrating 100 years of Bauhaus achievements, said Poerschke.

“I hope that people will recognize the many ways in which the Bauhaus is in our everyday lives,” she said. “The artists, along with their personal aspirations, political convictions, social ambitions and pedagogical strategies, developed artifacts and ideas in art, design and architecture as they transferred to new physical and virtual places. These transfers and modifications are part of the Bauhaus history.”

The Bauhaus Transfers symposium is free and open to the public.

The Bauhaus centenary and Penn State

Penn State joins the rest of the world in celebrating the centenary of what is arguably the most influential art and design school with a variety of events this semester.

Poerschke will be giving a lecture at 5:30 p.m. on Sept. 12 in the Palmer Lipcon Auditorim to present the foundations and history of the Bauhaus and its formative figures, and to discuss the dissemination of its ideals around the world.

The Palmer Museum of Art is hosting several Bauhaus programs at Penn State including the current Bauhaus Transfers: Albers/Rauschenberg exhibition through Dec. 15, and a pop-up show and gallery talk by Cathy Braasch, assistant professor of architecture in the Penn State Stuckeman School, on Nov. 1 titled “Bauhaus and Beyond: Abstraction in the 20th Century.”