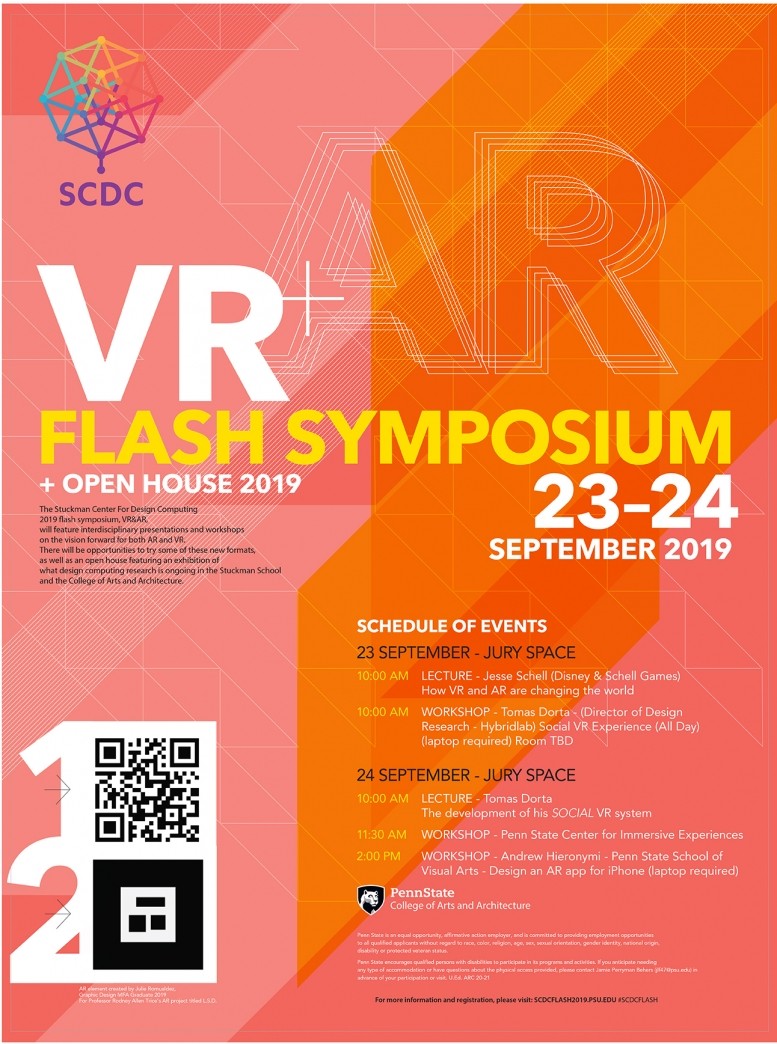 UNIVERSITY PARK, Pa. – The Stuckeman Center for Design Computing (SCDC) within the Penn State Stuckeman School will hold its annual Flash Symposium Sept. 23-24 in the Stuckeman Family Building in the hopes of educating attendees on new discoveries in virtual and augmented reality (VR and AR).

The event, which is being organized by Rodney Allen Trice, a professor of practice in the Graphic Design program, and Eric Mainzer, a doctoral candidate in the Department of Architecture, will include guest lecturers, workshops and exhibitions of recent research developments in the field of VR and AR.

VR installations will be accessible to the public and all those who attend the symposium. The SCDC hopes to provide participants with learning experiences and entry steps into VR.

Guest speakers at the event include Jesse Schell, founder and CEO of Schell Games and a faculty member in the Entertainment Technology Center (ETC) at Carnegie Mellon University. Started in 2002, Schell Games is the largest full-service educational and entertainment game development company in the United States. Prior to joining the ETC, Schell was the creative director of the Walt Disney Imagineering Virtual Reality Studio, where he worked for seven years as designer, programmer and manager on several projects for Disney theme parks and DisneyQuest, as well as on Toontown Online, the first massively multiplayer game for kids. Following his lecture, Schell will provide some hands-on experience with a sampling of his company’s work.

Thomas Dorta, professor in the School of Design at the University of Montreal and director of the Design Research Laboratory Hybridlab, is bringing Hyve-3 to Penn State. He is the lead designer of the project which constitutes an innovative social virtual reality co-design system. Dorta is also a lecturer at Concordia University and the Polytechnique Montreal, and an associate professor at the Université de l’Ontario français in Toronto.

Andrew Hieronymi, assistant professor of new media in the School of Visual Arts at Penn State, will also be a speaker. His recent work focuses on the sensation of movement in digital games by creating interactive installations emphasizing the physical relationship between player(s) and interface during the act of playing.

The SCDC is devoted to advanced design research and learning in computational design. The center’s projects vary from engaging in architectural robotics, simulation and visualization, game development, geographic information systems, sustainable development and digital fabrication, as well as historical and theoretical aspects of computation in design.

For more information on the Flash Symposium, which is free and open to the public, please visit the website at: https://scdcflash2019.psu.edu/.