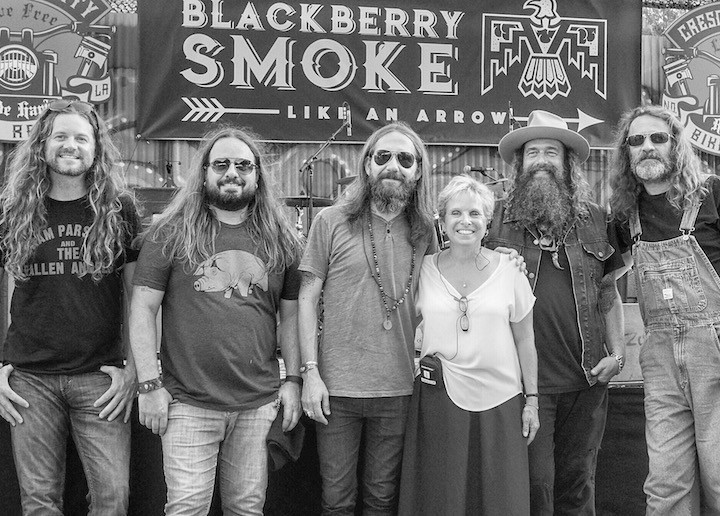 Mary Lou Belli, a two-time Emmy Award winner, is a 1978 graduate with a bachelor of arts in theatre and a prolific television director. She is also a producer, author, speaker, teacher and actor. Mary Lou talks about the need to be an entrepreneur of one’s own career. Below is a summary of our conversation of her nearly 40 years of doing just that.

Path to Penn State and the School of Theatre

Mary Lou chose Penn State because of its strong theatre department and strong business school. The fourth of five children, she tells how her father, who finished his business degree through night school because he wanted to get his degree before any of his children, encouraged her to go to business school. Accepted into Penn State due to her strong academics, she was invited to join the acting program, as a freshman, after she was cast as Louisa in a Thespians production of The Fantasticks. In addition to her requirements as a theatre major, she took advantage of the offerings of the music department for voice lessons and the physical education department for dance lessons. As it would turn out, Mary Lou would never take any business classes at Penn State. Instead, she graduated from the theatre program in three years with forty extra credits. She says that she “thoroughly used what Penn State had to offer towards fulfilling her goals.”

Her education was influenced by many, including Bruce Trinkley and Robert Trehy in the music department and Helen Manfull, Bob Leonard, Manuel Duque, Jean Sabatine, Archie Smith and David Alan Stern in the theatre department. A fun side note: she later hired David Alan Stern as a dialect coach on a production of Brian Friel’s The Freedom of the City that she was producing. Another influence came from an unexpected place: Ken Holamon, who taught set design for the theatre department. At the time, Mary Lou says that she most resented having to take set design, but now, as a director, she uses the skills that she learned from Ken every day.

The early years in New York City after graduation

Things happened fast for Mary Lou after graduation. She moved to New York City, rooming with a dance class friend from Penn State, and secured an agent and found work. The first six months of her time there were eventful, with their apartment being burgled twice. But, she found her feet. She got her Equity card and quickly found acting jobs in theatre, musicals and soap operas. She met her husband, a television actor, at a commercial audition—one which neither booked, but it worked out all the same. They were married and relocated to Los Angeles soon after. Mary Lou wanted to try her hand at television.

Transition into television and directing.

Mary Lou arrived on the West Coast with built-in contacts and a support system. Within a few days of her arrival, one of those contacts, a friend who had been at their wedding, helped her find work on the Steve Martin-produced sitcom, Domestic Life, as an adult actor stand-in.

Her job was to stand in while the child actors were in school and to provide coaching. She also coached many of the adult actors, and it was this that led her to directing. She credits the idea to actor Jack Riley (Occasional Wife, Rowan & Martin’s Laugh-In, Hogan’s Heroes, The Mary Tyler Moore Show, The Long Goodbye, The Bob Newhart Show, Diff’rent Strokes, Night Court, Son of the Beach), who put the idea of directing into her head, which she had not previously considered. Active in the Los Angeles theatre scene, and a frequent actor at TheatreWest, a place known to be open to exploration and expansion of a skill set, she was given the opportunity to direct for the first time. She would direct Today’s Special by Judd Lear Silverman with the full support of artistic director Clyde Ventura. To this day, she says that when she makes a bad decision direction-wise, Clyde is on her shoulder saying, “Are you really going to do that?”

She continued to coach but also found her way into the control booth on television sets. She shadowed and learned from directors such as Jim Drake (All in the Family, Good Times, Domestic Life, Newhart, The Golden Girls), Will MacKenzie, (Moonlighting, Family Ties, Scrubs), Jerry Levine (Boy Meets World, The District, It’s Always Sunny in Philadelphia, Monk, Elementary, Hawaii Five-0), and Phil Ramuno (Too Close for Comfort, Gimme a Break, Nine to Five, Charles in Charge). Phil, with whom she would later write her first book, worked with her and taught her how to design shots. Before she directed her first television show, she had shot listed close to 100 episodes on paper.

Women in Hollywood
It was not always easy for women to find their place in Hollywood at the time. Women were not afforded the same opportunities as men and there were those who started at the same time as Mary Lou who advanced faster.

However, she stresses that she did the work, which is why she was able to advance as she did. She took herself to the American Film Institute library, studied and reached out. Al Burton, producer of Charles in Charge, purposefully gave women a chance and one of them was Mary Lou. Charles in Charge would be her first television show. Director Michael Lembeck, who directed 67 episodes of Major Dad, said that if he wasn’t available, then Mary Lou should have first shot. Major Dad would be her second series. Another mentor, Peter Engel, who created Saved by the Bell, employed her for series after series. When she wanted to try her hand at an hour-long episodic, Terrence O’Hara (Jag; Dr. Quinn, Medicine Woman) introduced her around. Many others did the same—in particular, Bethany Rooney (St. Elsewhere, Melrose Place, Beverly Hills 90210, Ally McBeal, One Tree Hill, Desperate Housewives, Bull), with whom she went on to co-author a book. Belli says: “Part of directing is being able to read people, and then learning to read those that will help you and be generous. Because not all were.”

Clyde Ventura said to her once, “Show me a good actor who is not working, and I can tell you why.” Something was getting in their way. Mary Lou understood that Hollywood, “even with its huge odds against you, if you can find a way of shining a light on what you can do, and that product is good, you will be recognized.”

Mary Lou is the co-author or editor of four books: The New Sitcom Career Book with Phil Ramuno, Acting for Young Actors: The Ultimate Teen Guide with Dinah Lenney, Directors Tell the Story with Bethany Rooney, and Acting for the Screen.
She was working at Paramount Studios at the time the internet was becoming a part of everyday life. She and others wondered how this resource could be used to tap the library of the sitcoms that Paramount Studios had done, and, at the same time, to provide a curriculum for study. Perhaps a bit ahead of what the internet at the time could do, so the idea of a book was born. The advice she was given was to go to the library to find where her book fits, and to contact those publishers. The book was The New Sitcom Career Book, currently in its second edition. Writing books has allowed her to pass on what she has learned. In an interview she gave to Penn State in 2017, she said, “When you can explain, or teach something to someone else, you automatically improve your own skill set.”

What from her time at Penn State does she carry with her?
Because Penn State allowed her to create her own curriculum, Mary Lou took many additional classes outside of her required course work. Allowed to take classes as pass/fail, she took as many as she could and still thrive as a student. Symbolic Logic, anyone? Penn State taught her how to pick what is important and to prioritize. Mary Lou has carried this with her in everything she has done. “Not a lot of wasted time or effort in my career,” she said.

Mary Lou emphasizes that advocacy is her life now. She is active in teaching, mentoring and providing support to others just as others have done for her. The next thing on her busy calendar after our discussion was to work with eight mentees. Passing it on. That is what she is all about.

Mary Lou received a College of Arts and Architecture Alumni Award in 2018, a year in which all seven of the honorees were women.

Interviewed by Allison Lee (B.F.A. Stage Management ’95), current president of the School of Theatre Affiliate Program Group. “Spotlight on Alumni” is a project of the SoT APG, which is made up of nine alumni, one faculty advisor, two current students and the director of the School of Theatre, working to connect with other alumni and to encourage and support education and career opportunities for students in the field of theatre.