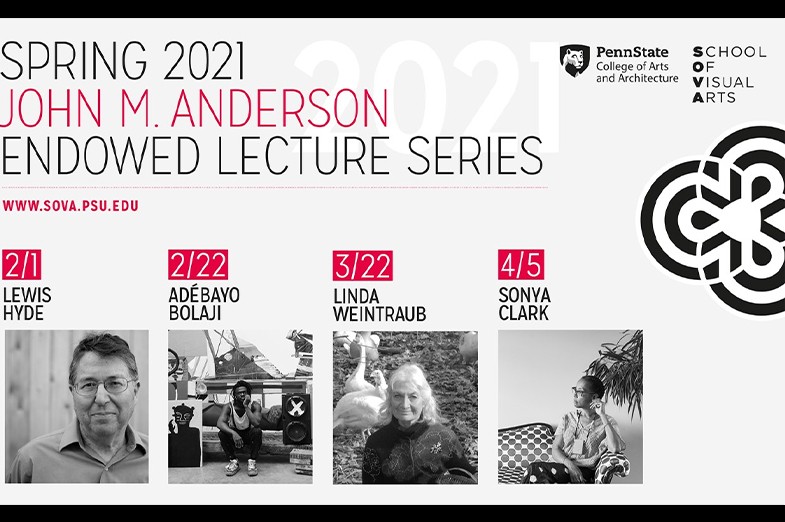 SoVA to kick off Anderson Lecture Series on Feb. 1

The Penn State School of Visual Arts announced its spring 2021 lineup for the John M. Anderson Endowed Lecture Series, which will be presented via Zoom and is free and open to the public. Pre-registration for each lecture is required via the links below.

Lewis Hyde, “The Art of Forgetting”

Lewis Hyde is a poet, essayist, translator, and cultural critic with a particular interest in the public life of the imagination. His 1983 book, “The Gift,” illuminates and defends the non-commercial portion of artistic practice. “Trickster Makes This World” (1998) uses a group of ancient myths to argue for the disruptive intelligence that all cultures need if they are to remain lively and open to change. “Common as Air” (2010) is a spirited defense of our “cultural commons,” that vast store of ideas, inventions, and works of art that we have inherited from the past and continue to enrich in the present.

Hyde’s most recent book, “A Primer for Forgetting,” explores the many situations in which forgetfulness is more useful than memory—in myth, personal psychology, politics, art, and spiritual life. A MacArthur Fellow and former director of undergraduate creative writing at Harvard University, Hyde taught creative writing and American literature for many years at Kenyon College. Now retired, he lives in Cambridge, Massachusetts, with his wife, the writer Patricia Vigderman. Hyde is a trustee of the MacDowell Colony and a founding director of the Creative Capital Foundation.

Adébayo Bolaji is a multi-disciplinary artist living and working in London, England. He has a background in theatre having trained at the Central School of Speech and Drama in London. He also holds a law degree from London Guildhall University.

At the center of his practice is the dialogue of change and the focus of the individual within a connecting society, whether that be anthropological, religious, historical, or popular culture. The use of the vibrant and metaphorical language is a crucial element in his work, helping to narrate a different story within each painting, allowing for the viewer to take an active role in the works. His works are expressed in different mediums, from mainly painting to sculpture, film, and theatre. Bolaji has exhibited internationally in London, Zurich, and Berlin, along with artist residencies in New York and Margate, including an artist residency with Yinka Shonibare MBE Guest Projects. His work has been featured in The New York Times, Forbes, Architectural Digest, DAZED, and the Financial Times. He is a published poet and the founder and artistic director of Ex Nihilo Theatre Group.

Linda Weintraub, “‘I’ and ‘Eye’: Creative and Sensory Innovation in Eco Material Art”

Linda Weintraub has supported controversial vanguard art as a curator, educator, artist, and author of several popular books about contemporary art. Weintraub’s most recent focus explores the timely intersection between contemporary art and ecology. The books exploring this burgeoning art movement include: “What’s Next? Eco Materialism & Contemporary Art” (2018), “To Life! Eco Art in Pursuit of a Sustainable Planet” (2012), and “Avant-Guardians” (2007), a series of textlets that include EcoCentric Topics: “Pioneering Themes for Eco-Art;” “Cycle-Logical Art: Recycling Matters for Eco-Art;” and “EnvironMentalities: Twenty-two Approaches to Eco-Art.”

Weintraub applies environmental concerns to her personal life by managing a sustainable homestead where she practices permaculture. She is also the author of “In the Making: Creative Options for Contemporary Artists and Art on the Edge” and “Over: Searching for Art’s Meaning in Contemporary Society.” She served as the director of the Edith C. Blum Art Institute located on the Bard College campus where she toured many of the fifty exhibitions she curated and published more than twenty catalogues. Weintraub was the Henry Luce Professor of Emerging Arts at Oberlin College, and currently teaches in the Nomad M.F.A. program at the University of Hartford. Her forthcoming publication is “WHO DO YOU EAT?”

Sonya Clark, “These Days. This Country. This History.”

Sonya Clark, born in Washington, D.C. to a psychiatrist from Trinidad and a nurse from Jamaica, is an artist and educator who uses the language of textiles, politics of hair, and commonplace materials to honor her ancestors and address race, justice, and historical memory. Clark is a professor at Amherst College, where she received one of her undergraduate degrees and was more recently awarded an honorary doctorate. Her formal art education came from obtaining an M.F.A. from Cranbrook Academy of Art and a B.F.A. from the School of the Art Institute of Chicago. For a dozen years, she resided in Richmond, Virginia, and chaired the Craft/Material Studies department at Virginia Commonwealth University.

Her work has been exhibited and collected in more than 400 museums and galleries globally. Her dedication to the legacy of crafted objects and the embodiment of skill comes from her maternal grandmother, who was a tailor, and the many makers she has studied with in her travels to more than two dozen countries. She is the recipient of a number of awards (including United States Artists, Rappaport Prize, Pollock Krasner, Art Prize, Anonymous Was a Woman) and residencies (including Black Rock Senegal, Red Gate in China, Camargo in France, Rockefeller Bellagio in Italy, Smithsonian Artist Research Fellowship, Yaddo in New York, and an Affiliate Fellowship at the American Academy in Rome.) Her work has been favorably reviewed in several publications including The New York Times, Philadelphia Inquirer, Sculpture Magazine, Artforum, Los Angeles Times, Hyperallergic, Mother Jones, Huffington Post, and Art in America.