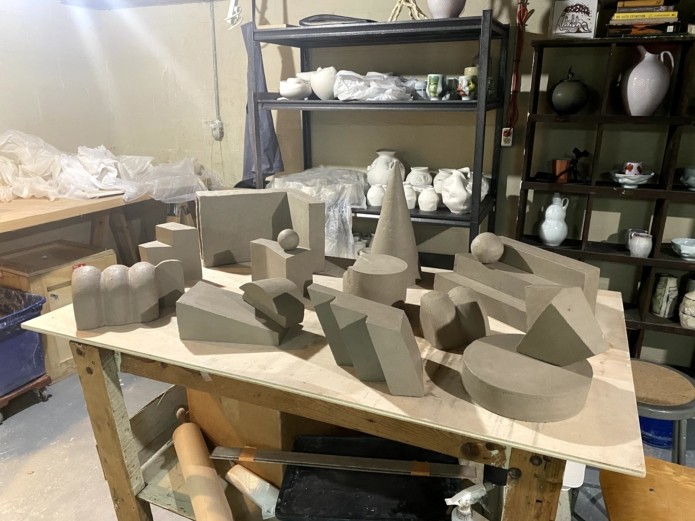 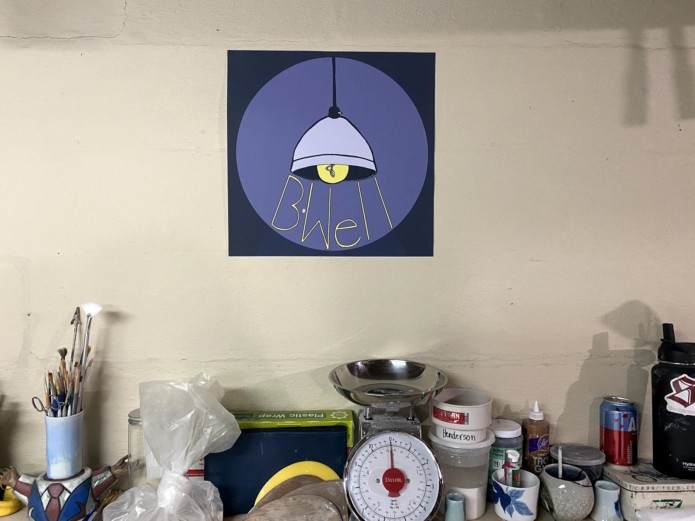 What do students in the visual arts do when they are suddenly unable to access their materials and studio space on campus?

Student artists were confronted with this situation when COVID-19 began to spread across the United States in March 2020. Quickly realizing the pandemic would drastically affect their ability to carry out their research and creative activity, second-year M.F.A. candidates in the Penn State School of Visual Arts approached the faculty about extending funding for their two-year program for an extra year. The faculty unanimously agreed, and Penn State has since become a model for other graduate visual arts programs grappling with how to best serve their students. SoVA is not accepting new students for 2021–22 in order to fund the current students’ third year.

“It is impossible for graduate students in the visual arts at Penn State to function without the studios and equipment of the school. They sign on to our program with the idea of having ready access to an intellectual community, large studio, access to woodshops, scanners, darkrooms, welding and casting equipment, kilns and wheels, et cetera,” said Helen O’Leary, professor of art. “Materiality is important, space is crucial, and to have to function out of a small apartment is simply impossible. We are a full-time residency program and by having no access to the building, their education and growth as artists was very much compromised.”

Austin Bradshaw, a graduate student in ceramics, said he felt “sheer relief” when he learned he and his classmates would get an extra year of funding.

“As an art student it would not have been possible to accept an extension without funding. Our lives and careers literally depend on it. Without the funding, I would have had to stick with the two-year plan, which would have been quite unfortunate,” he explained. “Having lost an entire summer plus a month-and-a-half of the spring semester, I couldn’t imagine having to arrive in the studios in August and be expected to complete my M.F.A. thesis work by March. Especially in ceramics, we rely on having access to a fully functioning studio to make work.”

Alexandra Russell, a graduate student in drawing and painting, noted that some students had the additional stress of needing to care for children at home while trying to work during the pandemic.

“Some of us live in small apartments, some of us have children that we’ve needed to shift our time to care for and most of us did not anticipate needing to set up a space at home,” Russell said. “Knowing that we have some additional time to work on our ideas in the midst of the pandemic means we have a little more insurance that we will be able to produce quality work. It is inconceivably difficult to tap into the stream of artistic production required for a two-year program with almost six months out of the studio, and potentially more months out of the studio to come.”

Like most students, visual arts students adapted to communicating solely via screens, but missed the in-person interactions that help them develop their work.

“One of the most important aspects of attending arts graduate programs is to receive feedback, collaboration, discussion and interaction regarding your work and others’ work,” explained Russell.

Even the most thorough Zoom sessions cannot account for the side conversations that happen after class, in hallways or in studios at random liminal times.”
– Alexandra Russell

Despite all the challenges, there have been some positives for Russell and Bradshaw that have ultimately steered their work in new directions.

“The pandemic has shifted my work to be more personal, has moved my practice outside and has incorporated more of the community than ever before,” said Russell. “I completed a community arts project to create sculptures from tree trimmings on peoples’ lawns…I ended up creating five sculptures all together across [State College], and it has pushed me to involve more social practice in my artwork and think outside of my studio walls.”

For Bradshaw, the pandemic forced him to “slow down” and take care of himself, which led to new directions in his work.

“It has allowed me time to think and reflect, as well as hone the conceptual side of my artwork since I couldn’t be in the studio making work,” explained Bradshaw. “I began sharing more of my personal relationship with the outdoors and shifted toward having more of an environmental concern. I’ve been researching moss and how it spreads from spores, oftentimes on the shoes of humans.”

To me this has a direct link to the pandemic and I don’t think I could have come to such conclusions without it happening.”
– Austin Bradshaw

Audrey An, also a graduate student in ceramics, said Penn State’s decision to extend funding for visual arts M.F.A students is a reflection of the School of Visual Arts’ commitment to and support of its students. She was fortunate to be able to work from a friend’s basement studio when she could not access campus spaces.

“When I was searching for M.F.A. programs, my list included a large number of schools with faculty members who similarly engage in my research interests [in digital fabrication], facilities that would assist my projects, a personal private studio and a generous amount of funding,” said An. “This additional year with funding speaks to how I made one of the greatest decisions when I chose to study here. I feel proud to be a part of Penn State.”

According to O’Leary, last spring the students became a tight-knit group through Zoom sessions where they shared readings and their experiences during the pandemic.

“This group gives me great optimism for the future of the art world—their work has a layer of sophistication, resilience and self-direction that comes from adverse experiences,” said O’Leary. “They look out for each other and for younger B.F.A. students and have a 24/7 work ethic. Our sense of community has become stronger, despite the difficulties and challenges of our new world.”

SoVA Ceramics faculty received a grant to transform Intro to Ceramics into a completely remote course.

Brian Alfred, associate professor of art, is the curator of “Sound & Color,” a group exhibition at Miles McEnery Gallery in New York City that runs through December 19.

Studio for Sustainability and Social Action Seeks Submissions for Symposium

The Penn State Studio for Sustainability and Social Action invites proposals for its inaugural symposium and exhibition, to take place virtually April 22–24, 2021.