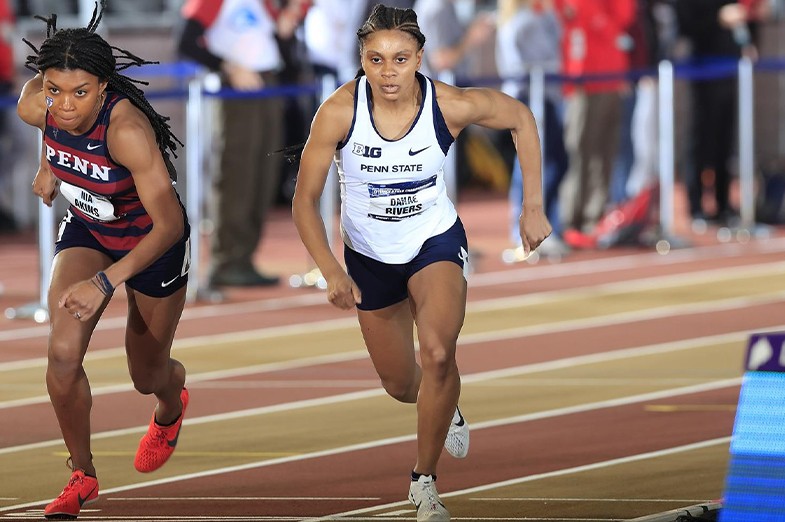 Since she was 8, Danae Rivers, Penn State School of Visual Arts senior and track and field champion, has been racing to the finish line, but 15 years later, she is also “racing to change.”

Following the police killings of Black people like George Floyd and Breonna Taylor, Rivers said she needed to bring awareness to the racial injustice issues occurring throughout the world.

“There were several days I would sit down and say to myself, ‘what can you do to portray a message to get this out?’” Rivers said.

It finally clicked when she decided to create “The Race to Change,” a video that features her Penn State teammates discussing the importance of equality.

When Rivers, who graduated from Penn State in 2020 with a bachelor’s degree in integrative arts, came back the University to pursue an additional degree in visual arts she realized that one thing she never accomplished was creating a video. When deciding on the idea for the project, she said her goal was to get viewers to self-reflect after watching the three-minute film.

“I wanted people to sit and think how they can become allies instead of tearing each other down,” Rivers said.

No matter one’s skin color, she said we are all capable of doing the same thing, which is why she wanted to include the voices of her teammates while displaying footage of them competing in different races.

“I am fortunate enough to use my track and field as a platform,” Rivers said. “Words are powerful.”

With that realization, Rivers knew it was important to include voice-overs so the overall message could linger.

Because Rivers is a photo and video intern in the College of Arts and Architecture, the access to equipment and editorial minds presented the chance for her to do her part and help bring racial injustice to light.

The decision to use video wasn’t an easy one and Rivers said she never imagined herself moving out of her comfort zone and spending three months producing a video.

Much of the time was spent on editing, adjusting light, fixing audio and adding footage. The effort came to a temporary stop when she encountered technical difficulties, lost all her work and had to start over.

“What have I gotten myself into?” Rivers said she asked herself at the time.

Working through the challenges reminded Rivers of how she won the 2019 National Championship in the Women’s 800-Meter Run, Penn State’s first-ever champion in the event.

“I had a coach who passed away and he would always tell us to run all the way through the line,” Rivers said. “That’s basically how I won that race.”

There were times when she wanted to give up while creating the video, but Rivers said the same rules that applied on the track also applied off. There was no giving up.

In October 2020, when the final product was complete, Rivers said it was a huge sigh of relief and she was excited to show the world something so motivational.

Rivers said her success in producing “The Race for Change” is not about the views, but about knowing that someone can take something away from it.