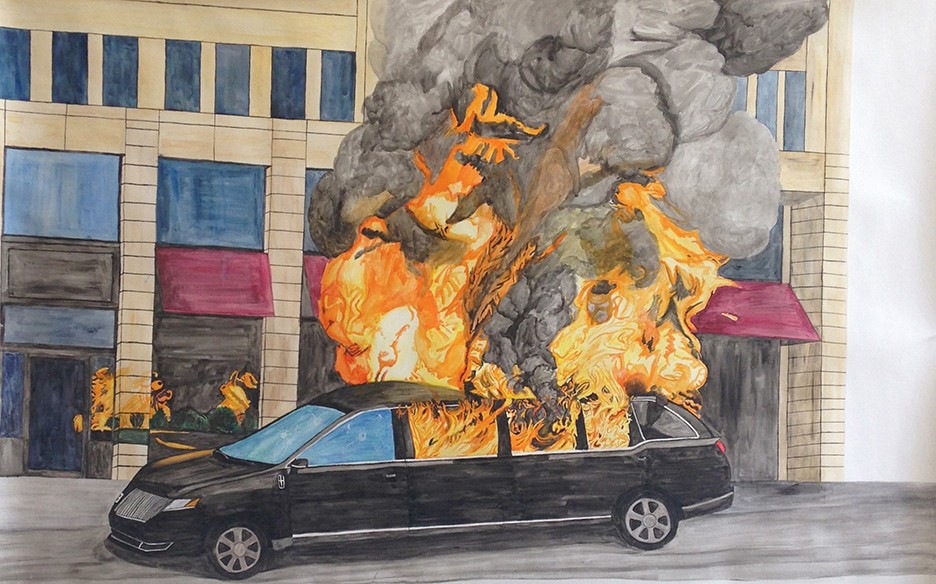 Everything in the Universe is My Brother, a solo exhibition by Rudy Shepherd, Penn State School of Visual Arts associate professor, will be on display January 13 through February 25 at Smack Mellon Gallery, New York. An opening reception will take place January 13, 6?8 p.m.

Everything in the Universe is My Brother features several bodies of work that are part of the artist’s ongoing investigation into the nature of evil. His portrait series depict the faces of criminals and victims of crime. Making no visual distinctions between the two, the artist explores the complexity of their stories and the gray areas between innocence and guilt. In this way, Trayvon Martin, Kim Jong-un, Heather Heyer, and Steve Bannon are all depicted in the group. By presenting the individuals first and their stories second, Shepherd attempts to create a space for humanity to be reinserted into the lives of people who have been reduced to mere headlines in the press.

Another recent painting series draws heavily on poignant moments from news sources, attempting to reconsider fleeting, sensational images in our collective consciousness in a more nuanced, complex way. Examples include a limousine set ablaze by the Black Bloc during Donald Trump?s inauguration, a car plowing into a crowd of protesters in Charlottesville, Virginia, and Alan Kurdi, a 3-year-old Syrian refugee found dead on the shores of the Mediterranean Sea.

Shepherd’s monumental Black Rock Negative Energy Absorber sculpture†and his small-scale ceramics, called†Healing Devices, serve as a counter-point to what can seem like vast unsolvable problems by offering a spiritual solution. However, their unknown application questions the belief in art and the power of belief. The Healer, an outgrowth of the sculptural work, is a mystical being who appears in a series of videos. The figure moves through the world in a state of detachment, leading the viewer to contemplate intermediate spaces?those that lie between binaries such as good and evil?and serves as a surrogate for the artist, enabling him to explore feelings of social and political frustration, isolation, and impotence.