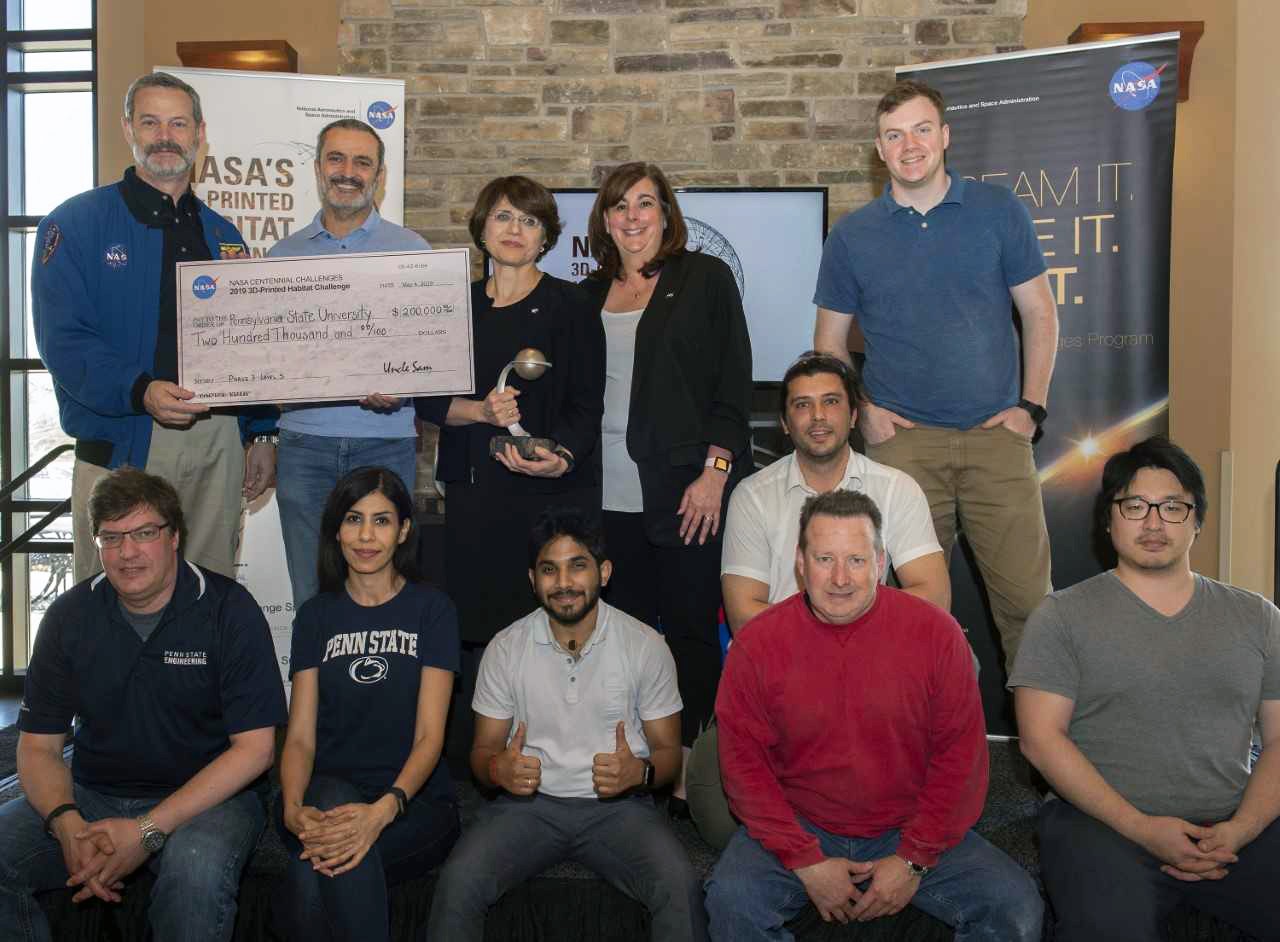 When the Phase 3 results of NASA’s 3D-Printed Mars Habitat Challenge were revealed in Peoria, Illinois, in early May, Penn State fell just short of besting its friendly rival AI SpaceFactory. But in the process, the team engineered a breakthrough that moves forward 3D-printing construction research and pushes the team closer to the goal of creating sustainable housing on Earth.

For just more than two years, PennStateDen@Mars, an interdisciplinary team composed of students and faculty representing the Colleges of Arts and Architecture, Engineering, Agricultural Sciences and the Materials Research Institute, has been competing in NASA’s ambitious challenge that calls on entrants to develop advanced 3D-printing technology to produce a structurally sound habitat that can be printed by NASA space explorers on Mars and beyond. And things have been going quite well.

The second-place finish in the final stage of Phase 3 of the competition, which required the two remaining teams to 3D-print a one-third scale habitat, earned the Penn State team $200,000, bringing their competition earnings to $500,000.

Along with the winnings, the team has received grant money from Penn State as well as in-kind contributions of materials and consultation from Autodesk, Gulf Concrete Technologies and Tilcon. The support has pushed the team to tackle the numerous challenges that their design presented, which included printing a fully enclosed structure – something that has never been accomplished in 3D-printed home construction research, according to José Duarte, Stuckeman Chair in Design Innovation in the College of Arts and Architecture.

The team’s habitat design features a cylindrical base completed with a dome-style roof concept that requires the 3D-printing robotic arm to add layers of paste-like concrete that inch closer to the center of the structure, resulting in a pointed roof that fully encloses the structure.

With nearly 200 spectators gathered at Caterpillar’s Edwards Demonstration and Learning Center in Peoria, the two teams competed side by side for five days, culminating with the final print of each team’s structure.

AI SpaceFactory was ahead for much of the three days dedicated to printing, but on the final day, and as the 6 p.m. deadline to complete the structure approached, Penn State moved ahead and finished printing with just 11 minutes left. In a dramatic attempt to finish, the AI team tried to prematurely place the prefabricated skylight on top of its structure and it fell to the ground due to a lack of support. The mishap stunned onlookers and following an audible gasp, Penn State looked to be in control of the competition.

“The atmosphere was exciting and lively. It was much like a football game,” Duarte said. “Each team was ahead at different points and we felt the pressure. But when their roof collapsed, we knew our design, which we didn’t have time to fully test before the final print, could win.”

With pressure of the moment behind them, the team took a moment to celebrate their success knowing their structure had made history.

“Printing an enclosed roof has never been done before,” Duarte said. “It was an amazing feeling and the success really highlighted the collaborative nature of the team. We had big dreams and because of everyone involved, they became a reality.”

After each team’s structure was completed, they underwent rigorous strength testing. The habitats were hit with a small wrecking ball and ultimately crumbled under the pressure of a Caterpillar backhoe that slowly pressed on the top of the structures with its bucket.

Although the Penn State team engineered a breakthrough in 3D printing, AI SpaceFactory narrowly won the Phase 3 competition and moved one step closer to winning the challenge. But even in defeat, the team returned to Happy Valley one step closer to the intended goal of the research, which is to develop 3D-prinited home construction technology that could impact homelessness or help to rebuild areas ravaged by natural disaster.

Mars is almost 34 million miles from Earth, but the need for sustainable building on our home planet is becoming greater as factors such as climate change become more prevalent, according to Shadi Nazarian, associate professor of architecture.

“We definitely feel a sense of social responsibility with this research,” Nazarian said. “Imagine an area that was devastated by a tornado; this type of technology could be sent to that area and shelters can be immediately printed for those who lost everything. This thinking drives our research and feels much more attainable with our latest achievement.”

To showcase the concept, the team is working with Penn State to identify an area on campus where a 3D-printed tiny house could be constructed. Similar to the MorningStar Solar Home, the building will be fully sustainable and offer a glimpse into the future of home construction.

As those plans develop, the team will continue its intensive research in an effort to refine its design for the NASA challenge, which will resume next year.