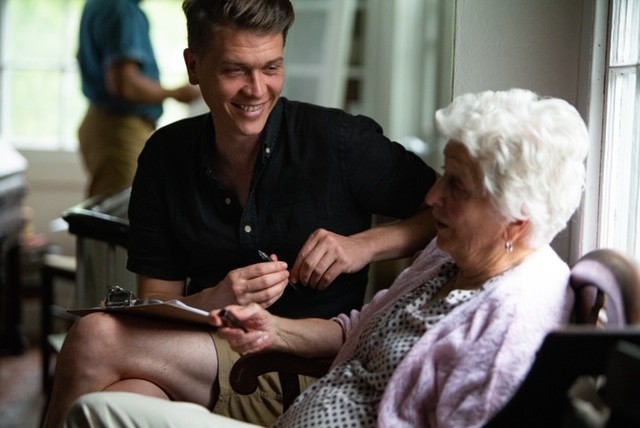 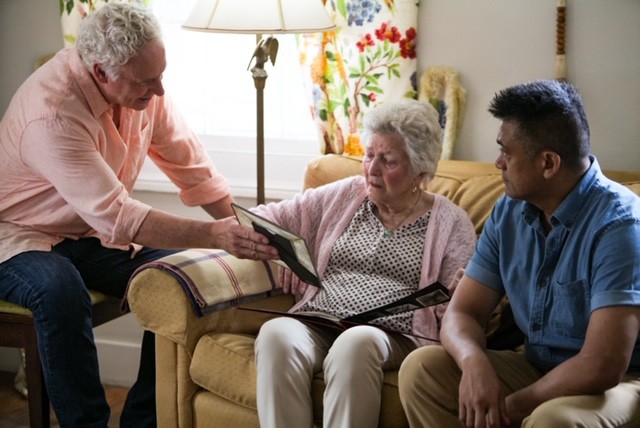 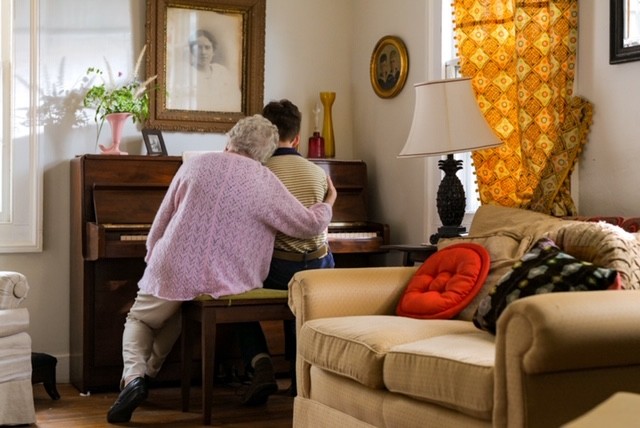 Theatre alumni, professor reunite for short film on a family’s love and loss

Brewer, who received an M.F.A. in Directing from Penn State in 2012, directed and wrote the script and the music for the film, which he is currently submitting to festivals. It’s based on a piece called “After the Forgetting,” which Erica Heilman produced for her podcast, Rumble Strip. The story is about an elderly mother who, through her dementia, started saying “I love you” to her son for the first time in his life.

According to Brewer, Heilman’s podcast had stuck with him for years, and when Shepherd first reached out to him about making a film together, he knew what story he wanted to tell. Brewer recently watched the film via Zoom with Heilman.

“I was so nervous to share the film with Erica, as she personally knew the subjects of the original podcast, and had a deep personal connection to the original piece. I felt a need to be ‘with her’ [via Zoom] as she experienced the film for the first time, and doing so was an emotional experience for both of us,” said Brewer. “I was able to watch her re-hear the words of her friends, spoken by people she had never met, in a context that I had reframed, and it was a powerful moment of generosity between artists who have never met in person.”

While Brewer does not have direct experience with a family member with dementia, he said he called on his experiences with his grandmother, Doris, who suffered numerous strokes and was often confused. “I remember the feeling of having to tell her the same things numerous times, and this is why I used her name for the character in the film that was played by Helen.”

He said Helen was the first actor that he imagined for the role of Doris, but didn’t know if she would be interested, or if they would logistically be able to get her to New Haven, CT, for multiple days to shoot.

Brewer and Shepherd met with Manfull in fall 2019 when they were in State College for a School of Theatre networking event. After having lunch together, the director and producer had their “Doris.”

“We shot the film in the home of friends in New Haven. It was such a joyful experience,” said Manfull. “New friends being made, old ones coming together. Perhaps it was the content about family, tensions and love, plus the fact that both Torrance and Nathan were so well organized, that made it such a moving experience.”

Brewer said he hopes the film will be selected by multiple film festivals so its message can be shared widely, especially among those affected by dementia. Distribution options are being discussed, and audiences will be able to view the film as soon as possible. Updates will be posted on the film’s website and social media pages.

Creating the film was truly a passion project, accomplished by a group of friends who honestly just did it for fun.”
– Nathan Brewer

Brewer, who is committed to the development of new works, has directed three original movie musicals for the New York Film Academy, in addition to multiple productions and industry readings of new musicals. He is on the faculty at the New Studio on Broadway at New York University (Tisch School of the Arts) and the New York Film Academy. Brewer is the founder and artistic director of Recreational Arts, a performing arts educational organization with programs in New York, New Jersey and Pennsylvania.

Faced with unique, unprecedented challenges the School of Music takes a science-based approach to pedagogy during a pandemic.