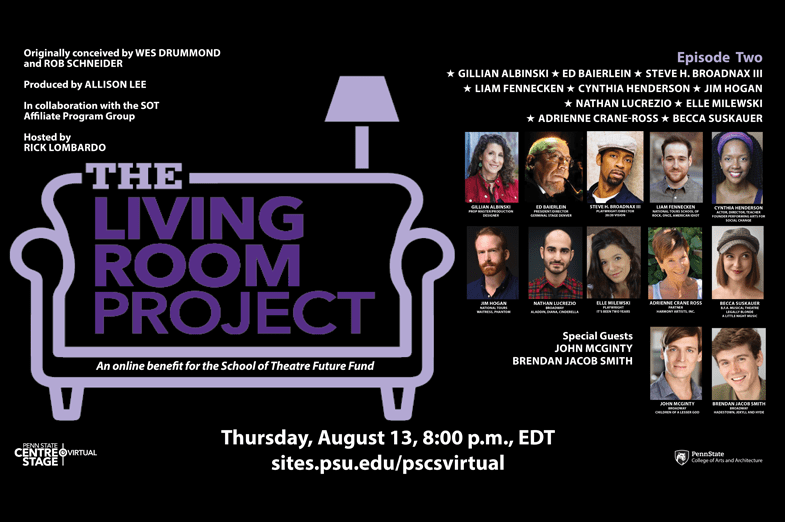 The Living Room Project, originally conceived by M.F.A. directors Wes Drummond and Rob Schneider, is a collaboration with the School of Theatre and the SOT Affiliate Program Group. Allison Lee, president of the group, is producer of Episode Two. Lee is an alumna of the Bachelor of Fine Arts in Stage Management. Her Broadway career includes Disney’s Tarzan, Spamalot, The Addams Family, among others. She transitioned to corporate events traveling domestically and abroad and now, is exploring the world of virtual events.

“The Living Room Project continues connecting alumni with one another by sharing their crafts and their missions for the benefit of the students of the School of Theatre. As the school prepares to continue the education of its students under circumstances, we never could have imagined, this episode seeks to foster connections with all who view it through our shared experiences with Penn State,” said Lee.

“With almost all live entertainment in America still in shutdown, so many of our alumni are currently at home and waiting to be able to resume their careers. We created TLRP as a way we can tell some of their stories and connect our alumni and our current students in meaningful ways. With this second offering, we expand with these new stories and offerings from our School of Theatre alumni and students,” said Lombardo.

Penn State Centre Stage Virtual is offered free to the public and was created to support Penn State students during this difficult time.