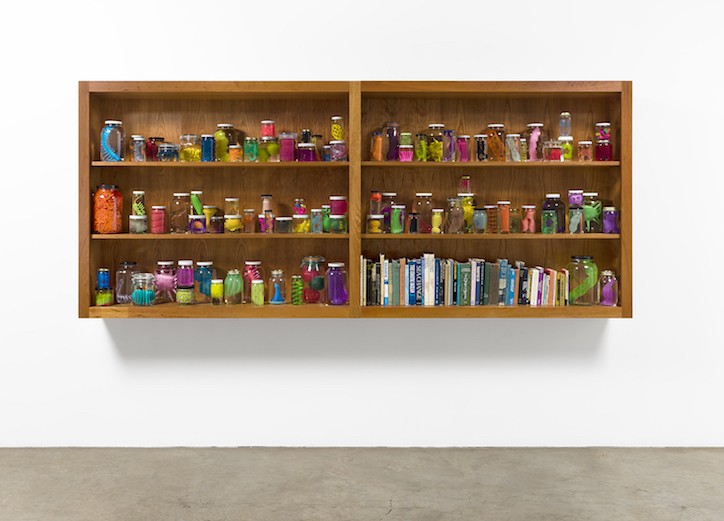 The Palmer Museum of Art at Penn State is pleased to announce its schedule of exhibitions for 2018. Dominated by three major contemporary shows, the lineup also highlights the work of nineteenth- and twentieth-century American painters and printmakers, Pop Art luminaries, and iconic photographers represented in the permanent collection.

The lead exhibition of the winter season is Plastic Entanglements: Ecology, Aesthetics, Materials, opening on February 13. Accompanied by a rich array of lectures, gallery talks, and films, this groundbreaking exhibition brings together provocative works by an international roster of contemporary artists. Large canvases exploring the potential ramifications of climate change will be on view this summer in When the Water Rises: Recent Paintings by Julie Heffernan. The 2018 season will close with A Small Radius of Light, a major retrospective of the work of Pennsylvania-based artist G. Daniel Massad, whose meticulous pastel still lifes can be found in museum collections across the country.

“This is a transformational year for the Palmer’s exhibition program,” stated museum director Erin M. Coe. “From a major traveling exhibition of contemporary art to shows that illuminate understudied artists, as well as a diverse range of media and topics in the history of American art, there is truly something for everyone at the Palmer in 2018.”

Pop Art emerged amid the proliferation of media imagery and consumer goods in the 1950s and ’60s. This exhibition highlights prints from the permanent collection by such Pop Art notables as Roy Lichtenstein, James Rosenquist, Andy Warhol, and Claes Oldenburg, among others. Organized by the Palmer Museum of Art.

Philadelphia-based artist Dox Thrash (1893‚Äì1965) pioneered a new approach to printmaking known as the carborundum process in the late 1930s. With its broad tonal range, the new process was ideally suited to the sensitive portrayals of Black life for which Thrash would become known. Also on view are watercolors and drawings by Thrash, all of which powerfully document the artist’s intimate, invested engagement with African American culture. The exhibition is organized by the Palmer Museum of Art with Dolan/Maxwell, Philadelphia.

Plastic Entanglements: Ecology, Aesthetics, Materials brings together sixty works by thirty contemporary artists to explore the environmental, aesthetic, and technological entanglements of our ongoing love affair with the paradoxical, infinitely malleable substance we call plastic. Visitors will encounter a varied array of artwork, from meticulous drawings, photographs, and video installations to 3D-printed objects and sculptures fabricated from found plastic.

A related exhibition, Gravity Schmavity: Repurposed Plastic Sculptures by Aurora Robson, organized by the Palmer Museum of Art and The Arboretum at Penn State, will be on view at the Arboretum from June 1 through October 29, 2018.

Art posters, many advertising periodicals to a burgeoning middle-class readership, thrived around the turn of the twentieth century. Drawn from the Palmer Museum’s permanent collection, the exhibition highlights the bold designs of Edward Penfield, a leading illustrator of the era and the art director at Harper’s magazine. Organized by the Palmer Museum of Art.

Framing the City: Photographs from the Permanent Collection
June 5‚ÄìAugust 19, 2018

Contemporary artist Julie Heffernan’s recent paintings explore imaginative scenarios and alternative habitats as her personal response to the threat of environmental disasters. In her intricately wrought, monumental canvases, Heffernan spells out the dilemma of climate change but also begins the conversation about how we might adapt to vastly different climatic conditions. Organized by the LSU Museum of Art at the Shaw Center for the Arts.

Still-life painting was a popular subject for many nineteenth-century American artists working in the northeastern United States. Pennsylvania, in particular, has a rich tradition of still-life painting. This exhibition features works by many specialists from the state‚ including John F. Francis, William Michael Harnett, and Severin Roesen‚ as well as examples by a varied roster of American artists who specialized in this genre. The holdings from the Palmer Museum are complemented by rarely seen loans from private collectors to explore how flowers, fruit, and simple household objects transfixed and beguiled viewers from the nineteenth century to the present day. Organized by the Palmer Museum of Art.

Contemporary artist G. Daniel Massad has dedicated the better part of the last four decades to reenacting the world around him. His poetic, meticulously detailed still lifes, rendered in pastel, call to mind the work of the Old Masters and are layered with iconographical “data”‚ maps, words, numbers, constellations, and personal symbols.

Organized by the Palmer Museum of Art and accompanied by a major publication, this retrospective will feature signature works borrowed from public as well as private collections. The exhibition will also include an array of early work and beautiful drawings from throughout Massad’s career, as well as many of the enticing objects featured in his mature still lifes‚ the “ordinary things” drawn from the studio and home of this remarkable artist, who wields shards of pastel rather than paintbrushes.

About the Palmer
The Palmer Museum of Art on the Penn State University Park campus is a free-admission arts resource for the University and surrounding communities in central Pennsylvania. With a collection of 8,850 objects representing a variety of cultures and spanning centuries of art, the Palmer is the largest art museum between Pittsburgh and Philadelphia. Areas of strength include the museum’s collection of American art from the late eighteenth to the present, Old Master paintings, prints and photography, ceramics and studio glass, and a growing collection of modern and contemporary art. The museum presents ten exhibitions each year and, with eleven galleries, a print-study room, a 150-seat auditorium, and outdoor sculpture garden, the Palmer Museum of Art is the leading cultural resource for the region.

Museum hours are Tuesday through Saturday, 10:00 a.m. to 4:30 p.m., and Sunday, noon to 4:00 p.m. The museum is closed Mondays and some holidays. The Palmer Museum of Art receives state arts funding support through a grant from the Pennsylvania Council on the Arts, a state agency funded by the Commonwealth of Pennsylvania.