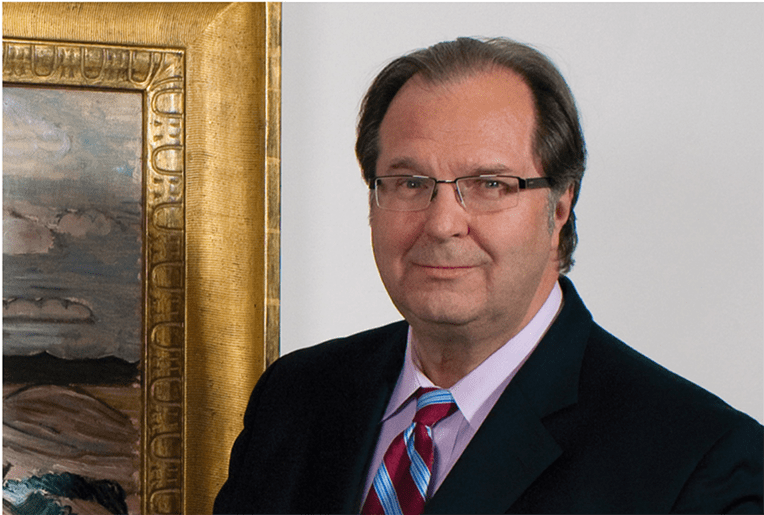 The Palmer Museum of Art at Penn State has announced a transformational gift of 140 American works on paper, recently donated by Penn State alumnus John P. Driscoll. The expansive gift, one of the most important in the 47-year history of the University’s art museum, establishes a significant American drawings collection at the Palmer Museum of Art.

The John Driscoll American Drawings Collection spans more than 150 years of American art history from 1795 to 1950, and in many ways reflects the wide-ranging scholarly and collecting interests of its namesake.

Highlights of the collection include a rare and early charcoal sketch by the neoclassical painter John Vanderlyn; important Hudson River School drawings by Jasper Francis Cropsey, Sanford Robinson Gifford, David Johnson, Jervis McEntee, and William Trost Richards; and city and architectural scenes by the most accomplished artists of the 19th century. Works on paper by women artists and a rare sketchbook by Jane Peterson, as well as Native American and western subjects, are well represented in the collection.

“This gift of significant drawings, watercolors and sketchbooks wonderfully complements and greatly enhances the museum’s extensive collection of 19th- and early 20th-century American painting,” said Palmer Director Erin M. Coe. “As an integral part of a teaching museum embedded in a tier-one research university, the collection will become an important resource promoting new scholarship and research that fosters the study of American art for generations to come.”

Driscoll, who earned a master’s degree and a doctorate in art history from Penn State, is a scholar, collector, gardener and art dealer based in New York City. His involvement with Penn State’s university art museum dates back nearly 50 years to the summer of 1972, when he began working at the museum as a graduate assistant. In 1976, he became the museum’s first official registrar. In late 1978, Driscoll left Penn State for a position as curator of the William H. Lane Foundation in Massachusetts, followed by a guest curatorial post at the Worcester Art Museum, before establishing an art gallery in Boston and then acquiring Babcock Galleries, New York, in 1987. In 2012, he renamed the business Driscoll Babcock. This year marks the gallery’s 167th year, making it New York’s oldest art gallery.

“My life in the world of aesthetic and scholarly concerns came into sharp focus while studying art history and working in the Museum of Art at Penn State,” said Driscoll. “I have always been appreciative of those experiences and the wonderful people with whom I had, and continue to have, the opportunity to work and grow. My wish is that my continuing association with the Palmer Museum of Art be an expression of my appreciation and that it will have a continuing beneficial effect for students and visitors to the University and the museum.”

Driscoll’s philanthropy has taken many forms since his time at Penn State. His past gifts of art to the Palmer include major paintings by Benjamin West, Jacob Eichholtz, Tompkins Harrison Matteson, and Sanford Robinson Gifford; a large group of prints, drawings and paintings by American modernist Arthur B. Davies; contemporary works by Abe Ajay, Marylyn Dintenfass, Alan Gussow, Don Nice, and Jenny Morgan; and notable ceramics.

Driscoll has written extensively on American art and has been the curator, co-curator, or a contributor to exhibitions that have traveled to more than 20 leading museums, including the Los Angeles County Museum of Art, National Academy of Design, Metropolitan Museum of Art, and the National Gallery of Art. Driscoll serves on the advisory board of the Palmer Museum of Art; has twice been its chair; is a past member of the board and the council of the National Academy of Design; and is currently on the Visiting Committee, Department of Drawings and Prints, at the Metropolitan Museum of Art.

This gift will advance “A Greater Penn State for 21st Century Excellence,” a focused campaign that seeks to elevate Penn State’s position as a leading public university in a world defined by rapid change and global connections. With the support of alumni and friends, “A Greater Penn State” seeks to fulfill the three key imperatives of a 21st century public university: keeping the doors to higher education open to hard-working students regardless of financial well-being; creating transformative experiences that go beyond the classroom; and impacting the world by fueling discovery, innovation and entrepreneurship. To learn more about “A Greater Penn State for 21st Century Excellence,” visit greaterpennstate.psu.edu.