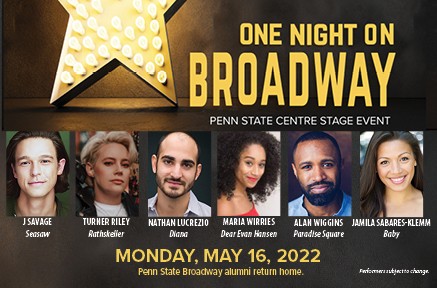 One Night on Broadway returns to Centre Stage

Penn State Centre Stage Broadway alumni will return home for “One Night on Broadway,” a special event, Monday, May 16, at the Penn State Downtown Theatre. The evening will include wine, hors d’oeuvres, desserts, and a performance. The event supports Centre Stage and the School of Theatre.

“Penn State is one of the top musical theatre programs in the country. You would be hard pressed to find a show on Broadway that doesn’t have a Nittany Lion gracing its stages.

And, no matter how far we go, from Broadway to Hollywood, we will always call Penn State our home!

The show will include six of our Broadway alumni recreating a song they sang while at Penn State, sharing memories about their time at University Park, singing a song from one of the current Broadway shows they are working on, and taking us behind the curtain to hear about the magic of The Great White Way! “Each of us are so excited to share with our State College family what we have been sharing with audiences around the world,” exclaims Schneider.