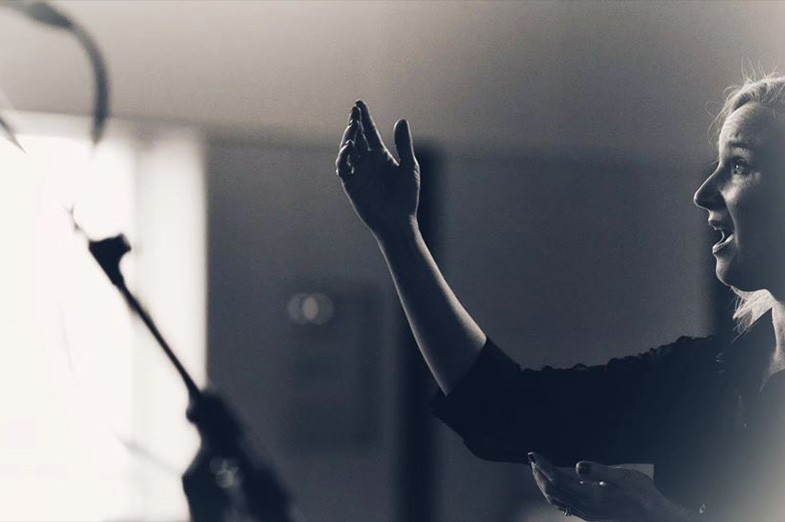 In late January, School of Music alumna Melody Gifford was preparing to take 10 of her most promising music students at the Dalian American International School in Dalian, China, on a trip to Malaysia for a music festival when she got word that the novel coronavirus may alter their plans. About one week later, as the epidemic became a pandemic, the festival was canceled and the Chinese government announced strict shelter-in-place orders. Dalian, a coastal city on the Yellow Sea with about seven million people, quickly went from a bustling metropolis to an empty cityscape.

The major—and sudden—change not only signaled what was ahead for the remainder of the world, but also a new reality for Gifford and her husband Cody as international educators who teach around the globe.

“There we were in the country that was the origin of the virus and the epicenter of what would become a pandemic,” Gifford said. “But, ironically, we felt very safe. We live on the school campus, which is in a really remote area, and the city of Dalian got the virus under control very quickly.”

The Giffords’ careers as international educators began in 2001 when the newly married couple each accepted teaching positions in Israel. Over the next 19 years, the couple returned to the United States twice for graduate school, but spent the bulk of their time teaching in Shenzhen and Dalian, China, and Santo Domingo, Dominican Republic, all while raising their two daughters. While teaching in Shenzhen, Melody met Penn State School of Music Faculty member and director of choral activities, Chris Kiver, when he presented during an annual conference of the East Asia Region Council of Schools in Shanghai, China.

The two stayed in touch and the Giffords eventually relocated to State College in 2014 for Melody to pursue a master’s degree in choral conducting under the supervision of Kiver.

“Dr. Kiver was incredible and I learned a great deal from him,” Gifford said. “His teaching comes through often in my own pedagogy and I’m happy that a chance encounter led to time at Penn State.”

Although she has 13 years of international educational experience, Gifford said that when she had to shift to remote instruction due to the pandemic, she quickly discovered that teaching choral ensembles in a virtual setting is a “nearly impossible” task.

Gifford’s students are primarily English speaking, but because of the diversity of the school she also has students who speak Mandarin and other languages. The language barrier is often broken down by interpretations of facial expressions or modeling, but with a screen between Gifford and her students, the challenge was much greater.

“I missed seeing their faces, and those interactions where we conquer the language barrier were lost,” Gifford said. “Add into the mix the internet access and signal issues and it made for a very difficult time.”

Gifford eventually found her stride through more one-on-one online interaction and a determination to deliver a quality educational experience to her students. As she made progress toward her educational goals, China’s virus mitigation efforts were also successful and in early May, students began to return to in-person class with a phased reopening approach that took about six weeks.

“Obviously, it looked very different,” Gifford said. “Everyone in the school was wearing masks, rooms were reorganized, there was tons of hand washing and sanitizing, and social distancing was in place. There were 20 pages of protocol, but we were back, and it gave us an opportunity to finish the year in a somewhat normal way.”

Just prior to the COVID-19 pandemic, the Giffords were exploring relocating to another country. But with the unforgettable school year completed and summer school in full swing, the Giffords are content with staying in China, for now.

“Juggling our professional lives and our family lives has been tough, just like I’m sure it has been for people in the States,” Gifford said. “Parenting two children in the middle of a pandemic and being located fairly close to the epicenter was scary. But there are lessons to be learned and I look forward to, hopefully, having a somewhat normal school year in the fall.”