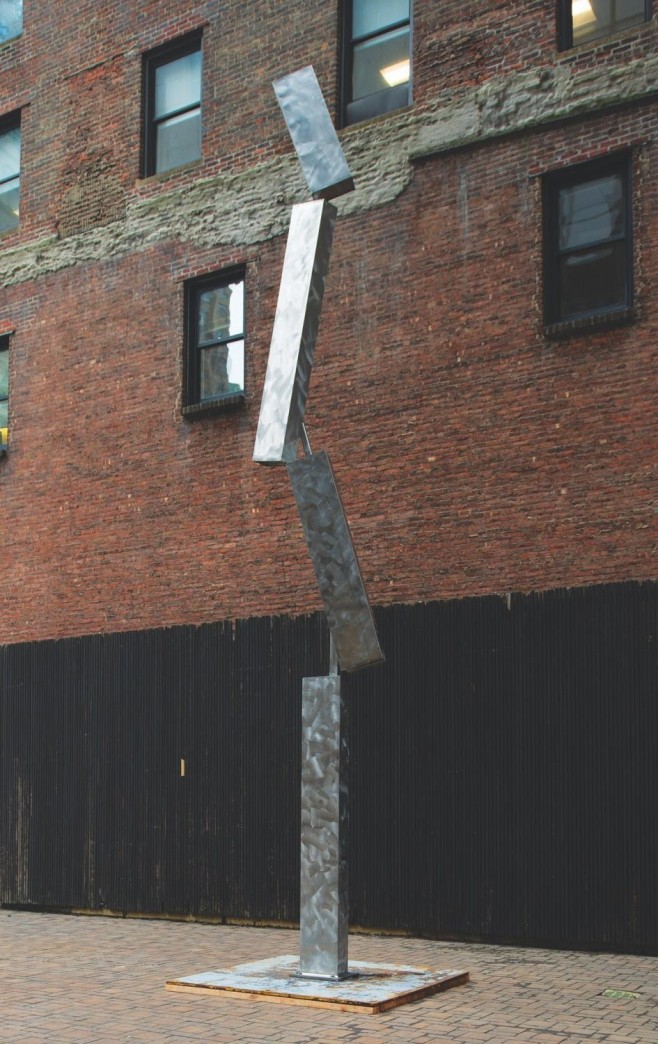 The Palmer Museum of Art at Penn State is pleased to announce that a major work by American sculptor George Rickey is now catching the eye of visitors to the University Park campus. Breaking Column III, a monumental stainless-steel sculpture completed by the artist in 2001, was installed on the museum’s distinctive plaza on Curtin Road on November 27. On loan from a private collection, this major sculpture by an iconic American artist will be on view through November 2019.

One of the most celebrated kinetic sculptors of the twentieth century, Rickey made his first mobile during his service in World War II and turned his full attention to making kinetic sculpture in the late 1940s. His signature stainless-steel sculptures are composed of “ordinary shapes,” in Rickey’s words, that are expertly engineered to respond to air currents and gravitational pull with deliberate, graceful, and unpredictable movements. Just over 25-feet tall, Breaking Column III is one of the artist’s most important and complex works. As its title suggests, Rickey playfully disrupts the stasis and calm demeanor of a classic architectural form, allowing its discrete components to shift and move in response to natural forces.

“We are honored to present a major work by one of the most inventive and influential artists of the last century,” said Palmer Director Erin M. Coe, who led the effort to bring the sculpture to Penn State. “Breaking Column III combines the laws of physics and the aesthetics of abstraction, resulting in a sculpture that is never static, but poised somewhere between motion and stillness.”

Bringing this major kinetic sculpture to Penn State required the concerted efforts and cooperation of numerous entities, including the Palmer, the College of Arts and Architecture, and architects, engineers, and planners from the Department of Planning, Design, and Properties in the Office of Physical Plant. Together they worked with representatives of the George Rickey Estate to organize the placement and installation of the sculpture on the Palmer plaza. The installation of the monumental sculpture was overseen by Philip Rickey, son of the artist, who serves as manager of the George Rickey Estate, LLC and president of the George Rickey Foundation. His grandfather James Leighton earned his civil engineering degree at Penn State after World War I and then went on to work in Pittsburgh designing and building bridges and working in early labor and industrial safety.

“Since Penn State is the premier land grant university in Pennsylvania, with its dedication to the sciences and engineering, as well as the liberal and fine arts, I am sure that my father’s sculpture will bring much delight and quizzical looks when students, faculty, staff, and visitors take some time to stand and watch the drama of Breaking Column III unfold,” said Philip Rickey.

Director Erin Coe agreed. “The Palmer plaza, a bustling pedestrian and vehicular thoroughfare, is the perfect setting to present this major late-work by George Rickey. With hundreds of students crisscrossing the plaza each day, the sculpture will enhance their educational and aesthetic experience at Penn State, while mimicking the ebb and flow of activity along Curtin Road.”

The son of a mechanical engineer and grandson of a clockmaker, George Rickey (1907–2002) was born in South Bend, Indiana, raised in Scotland, and educated at Oxford. After studying at modern art academies in Paris, Rickey returned to the United States in 1930 and pursued a career as a painter and teacher until answering the call to serve his country in WWII. By the early 1960s, he and his family settled in East Chatham, New York, after Rickey accepted a position as professor of art (sculpture) at Rensselaer Polytechnic Institute (1961‚Äì66) in nearby Troy. Rickey also maintained studios in Santa Barbara, California, as well as St. Paul, Minnesota, where he died in 2002. The University of Notre Dame is the home to the George Rickey archive.

Sculptures by George Rickey can be found in major museums including The J. Paul Getty Museum; Solomon R. Guggenheim Museum; Los Angeles County Museum of Art; The Metropolitan Museum of Art; Museum of Modern Art; Scottish National Gallery, Edinburgh; National Gallery of Art, Washington, D.C.; Tate Gallery, London; the Whitney Museum of American Art, and at university art museums across the United States, as well as in public spaces around the world.

The Palmer Museum of Art on the Penn State University Park campus is a free-admission arts resource for the University and surrounding communities in central Pennsylvania. With a collection of 9,000 objects representing and spanning a variety of cultures and centuries of art, the Palmer is the largest art museum between Pittsburgh and Philadelphia. Areas of strength include the museum’s collection of American art from the late eighteenth century to the present; Old Master paintings; prints and photography; ceramics and studio glass; and a growing collection of modern and contemporary art. The museum presents ten exhibitions each year and, with eleven galleries, a print-study room, a 150-seat auditorium, and an outdoor sculpture garden, the Palmer Museum of Art is the leading cultural resource for the region.

The Palmer receives state arts funding support through a grant from the Pennsylvania Council on the Arts, a state agency funded by the Commonwealth of Pennsylvania.

For more information on the Palmer Museum of Art or for the calendar of upcoming events, visit palmermuseum.psu.edu.