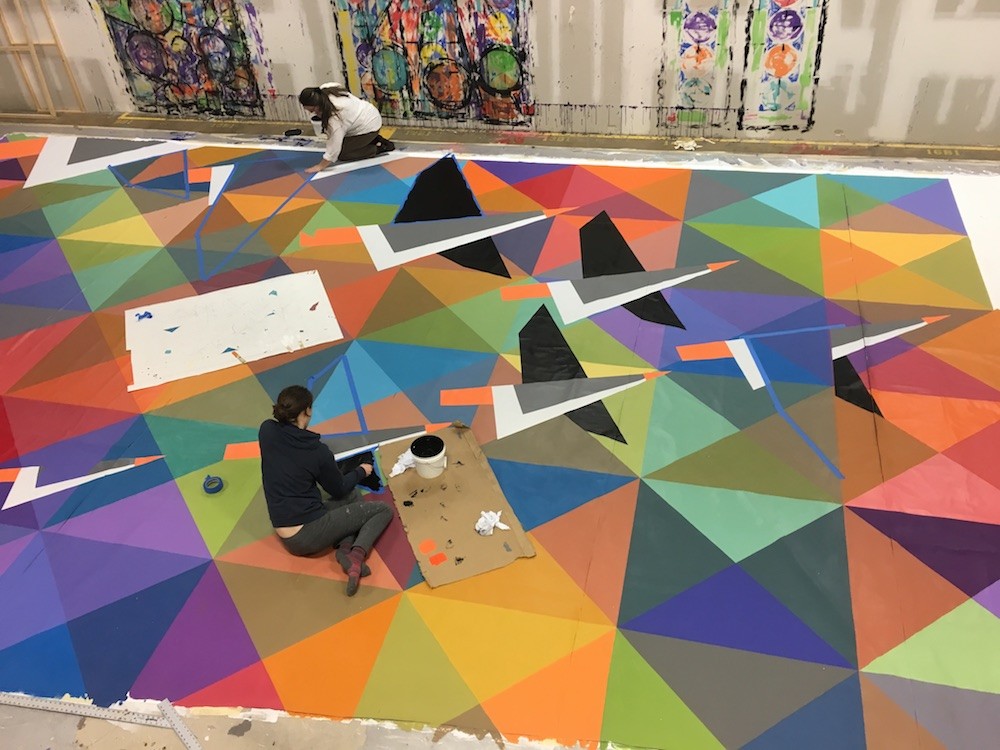 Penn State College of Arts and Architecture alumnus William Snyder III, a local artist and part-time instructor at the University, encourages the community to live by his motto “let art happen,” which is revealed through his new mural, “Wild Geese.”

Snyder had the help of community volunteers to complete and install “Wild Geese” on Humes Alley in downtown State College. The mural was inspired by Mary Oliver’s poem “Wild Geese”and, according to Snyder, is meant to inspire college students and community members who deal with loneliness and the challenge of finding themselves.

This is Snyder’s second large mural, the first being exhibited in Bedford, Pa. “Wild Geese” was completed much more quickly‚ in two weekends‚ with the help of 11 volunteers. The mural was funded in part by $1,000 from the Trailhead grant program, which funds projects intended to improve life in Centre County

Snyder said it’s important to note that while most murals are commissioned by towns and businesses, “Wild Geese” was a personal project. He had to get approval from the building owner, and that approval, said Snyder, was a nice affirmation that local residents want to see more art downtown.

Snyder said “Wild Geese” has the power to brighten people’s day and give them the push they need. “I turned a bland wall that was normally unnoticed into positive energy,” he explained.

Both the bright colors and the intricate design exhibited in the mural represent Snyder as an artist. He loves large-scale, public projects that are always changing. The puzzle of trying to solve challenging projects and learning how to construct exactly what he has in mind is something Snyder looks forward to when creating.

Being a part-time professor, Snyder stressed how important it is for people to make time for what they love. He said he has been in a “state of life reinvention” over the past two years‚ a challenging feat but one he says is paying off.

In addition to being an artist and professor, Snyder is also involved in local theatre and finds that his love for theatre and entertainment ties in nicely with his art. Creating something new and original, in any form, is something he always loves to do.

Snyder said it is important for people to “do the unexpected, think outside the box and recognize the potential of human willpower,” all of which is represented in “Wild Geese.”

Snyder encourages people to visit his website http://www.williamsnyderiii.com/for more information on him and his art.