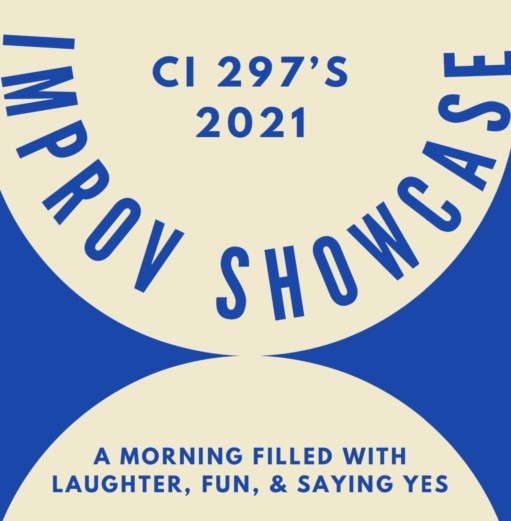 “The Reflection Project: Looking at Who WE ARE,” a group of themed interdomain general-education courses sponsored by the Center for the Performing Arts at Penn State and funded by The Andrew W. Mellon Foundation, recently concluded its inaugural semester with a live virtual Improv Showcase.

Andrea McCloskey’s spring 2021 semester course was offered as a hybrid, in which the 23 students attended class in a rotation via Zoom and in person in the Center for Pedagogy in Arts and Design Teaching Lab. The Penn State College of Education general-education course was open to all but was taken mostly by students not studying the performing arts.

“It’s called ‘Improv Theater, Curriculum and Instruction,” so it’s supposed to get us to reflect on improvisation as a way of being in the world, communication and then ourselves as learners — what is my style of learning,” said McCloskey, an associate professor of education. “Because my background is in curriculum and instruction, I’m trying to make this a chance to reflect on how one would learn best in a university setting — what does it mean for me if I’m going to be a teacher?”

In the final class, students broke into smaller groups and engaged in pairs in random scenes built upon suggested words. Some skits became examples of patience in adversity, others in absurdist humor, but there was rarely a lull in the interaction and students were quick to respond off the cuff.

The core mission of “The Reflection Project” states that by engaging students with the arts, students can more fully discover their identities, understand other points of view, be able to confidently tell their own and others’ stories and recognize how they fit into the world.

“When applying for the funding, we needed to reflect on the phrase ‘We Are,’” McCloskey said. “So I wanted us to practice together what does it mean to be with different people and to also have a sense of community at the same time. It’s kind of an experiment in that — how can we use improv theater to just get better at living together.”

“Andrea was the perfect choice to develop the first-ever Mellon-funded course,” center Audience and Program Development Director Amy Dupain Vashaw said. “Giving an academic the chance to combine her teaching with one of her other passions — in this case, improv performance — was so gratifying, as well as fun to see how she incorporated the performing arts into the class.”

The coursework featured virtual engagements related to programs scheduled for the center’s upcoming seasons, including artists from the Small Island Big Song collective and the stage works “Fandango for Butterflies (and Coyotes)” and “Cartography.”

Penn State faculty gathered in mid-April to discuss next steps to instructors who are developing courses for the 2021–22 fall and spring semesters. Courses funded by the Mellon Foundation to be developed this summer for fall instruction are:

Center for the Performing Arts Director Sita Frederick will discuss her raison d’etre in a special episode of “Meeting the Moment with Michael Mwenso,” from June 23–30.

The Center for the Performing Arts will present the free virtual presentation “Juneteenth: A Fierce Urgency Celebration!,” starting at 7:30 p.m. June 19.

The new director shared insight into what she expects in her first year, how to engage new and returning audiences, and the “elephant in the room” of central Pennsylvania.