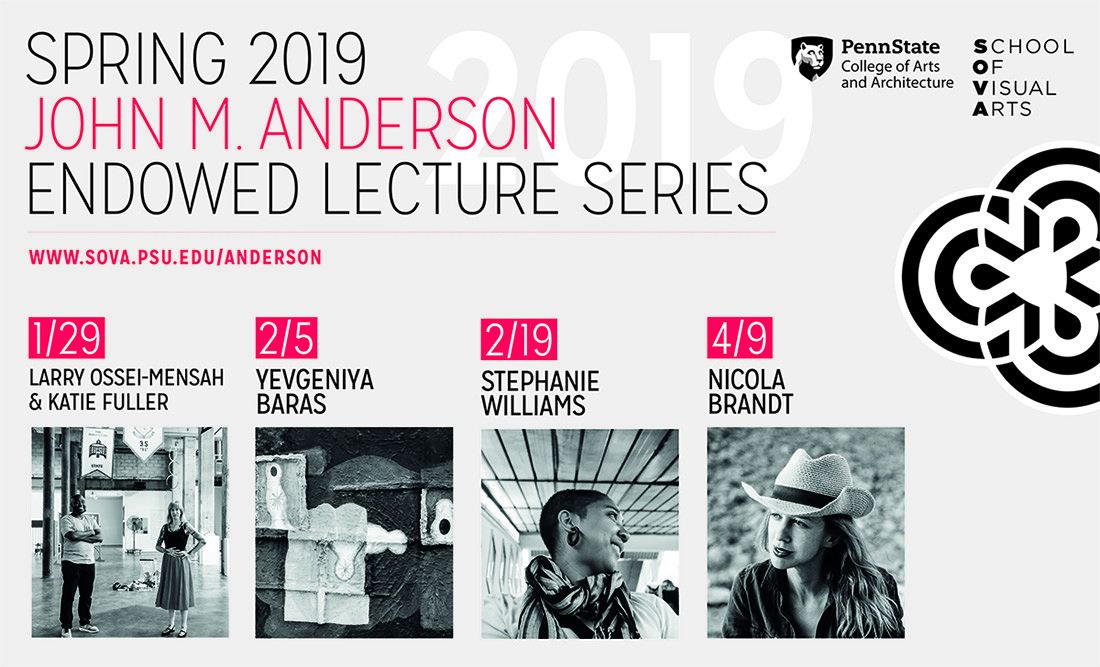 Kicking off our spring season are curators Katie Fuller and Lay Ossei-Mensah. With them they bring their exhibition Race & Revolution: Still Separate – Still Unequal, which critically examines how school segregation is worse today than it was in the years immediately following Brown v. Board of Education. The exhibition will be on view on-campus and downtown at the HUB Gallery and Woskob Family Gallery from January 29 – April 6, 2019. Hear them speak about the exhibition on Tuesday, January 29 at 4 p.m. in the HUB-Robeson Center?s Flex Theatre. For more information about the exhibition, please visit http://www.racerevolution.org/

Yevgeniya Baras is Brooklyn-based painter, curator, and educator. She†blds densely textured abstract paintings and is the co-founder of Regina Rex†Gallery, an†artist-run gallery of Manhattan’s Lower East Side. Baras will give a lecture about her studio practice and creative research on Tuesday,†February 5†at 11:30 a.m. in the Lipcon Auditorium inside the Palmer Museum of Art. She will also serve as the juror for SoVA?s annual Undergraduate Juried Exhibition. †

Stephanie Williams†is a DC-based artist and educator whose work navigates hierarchies of taste. Worng in sculpture and stop-motion animation, Williams considers complex narratives that humans struggle to digest, and often leave out of polite conversation. She will give a lecture titled ?Too Obviously†From†an Animal? on Tuesday,†February 19†at†11:30 a.m. in the Lipcon Auditorium inside the Palmer Museum of Art.†

Nicola Brandt is a Namibian?born multimedia artistorking in photography, installation and the moving image. Her work explores experimental documentary†within the discourses of conflict and legacies of colonialism. Brandt will give a lecture titled ?Parallel, but Elsewhere: Contesting the Colonial Archive?? on Tuesday,†April 9†at†3 p.m.?

Lectures are free of charge and open to the public. The Penn State School of Visual Arts John M.nderson Endowed Lecture Series was established in 2001 through the generous support of John M. Anderson, Penn State professor emeritus. The result of Dr. Anderson?s love of the philosophy of art and painting, his endowment contributes to the creative and intellectual life of the campus. Dr. Anderson, an Evan Pugh Research Professor of Philosophy, was a longtime faculty member and three-time department head in the Department of Philosophy and the first director of Penn State?s Institute for the Arts and Humanities.