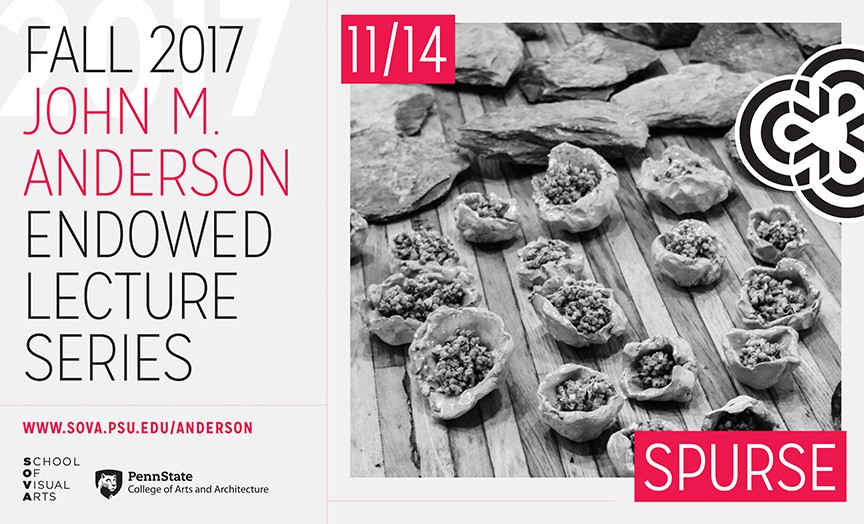 The Penn State School of Visual Arts (SoVA) is pleased to announce a visit by SPURSE as part of its John M. Anderson Endowed Lecture Series. SPURSE members Matthew Friday and Iain Kerr are part of† a collective of artists and designers that work to transform complex environmental and social challenges. Their lecture titled ?How to Eat Your Sidewalk: a radical rethinking of how we cook and eat as a pleasurable, political, and ecological act? will take place Tuesday, November 14, 2017, from 3 to 4 p.m. in the Palmer Lipcon Auditorium, Palmer Museum of Art.†

SPURSE recently published Eat Your Sidewalk (eatyoursidewalk.org), a radical rethinking of how we cook and eat as a pleasurable, political, and ecological act. SPURSE makes art from things like public policy papers, oral history archives, environmentally engineered wetlands, free public restaurants, bacterial laboratories for museums, nomadic clothing and housing systems, research institutes to study urbanism, and smart phone applications. SPURSE begins each project by inclusively determining the points within ongoing processes that can be leveraged to catalyze meaningful material and social transformations. To fully engage these questions, SPURSE frequently employs the tools and techniques of disciplines outside art, including ecological design, community organizing, and systems engineering. SPURSE is guided by a strong interest in aesthetics, as both a means to re-sensitize people to the world they are of and as a technique of assembling new material and social configurations. SPURSE has created public projects in collaboration with organizations such as Pitzer College, the North Atlantic Marine Alliance, Hudson River Sloop Clearwater, Department of Environmental Conservation, and River Keepers. SPURSE has exhibited at the BMW Guggenheim Lab, Massachusetts Museum of Contemporary Art, the Indianapolis Museum of Art, Grand Arts, White Columns, the Kitchen, and the Bemis Art Center. SPURSE?s work has been reviewed in Drain Magazine, Art Papers, and Art Lies, and has been included in several catalogs, including The Interventionists (MassMOCA) and Experimental Geography (Independent Curators International/Creative Time). For more information, visit www.spurse.org