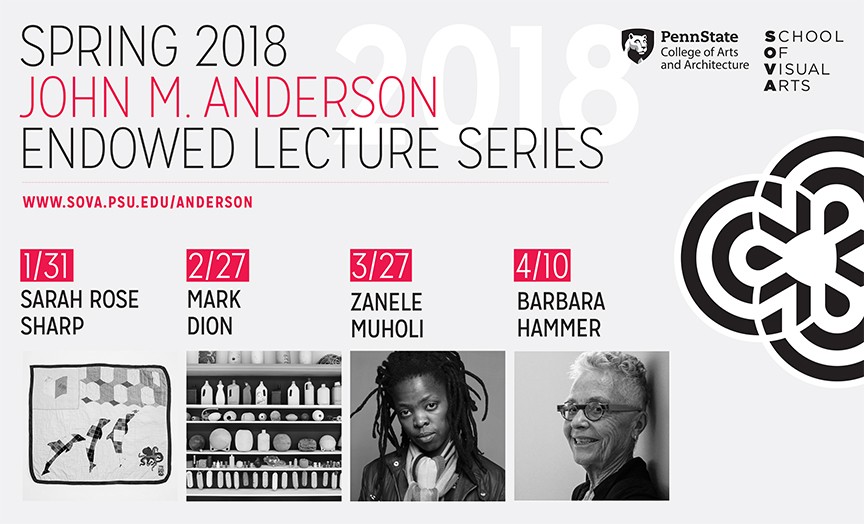 Kicking off our spring season is Sarah Rose Sharp, a Detroit-based writer, activist, and multimedia artist. A Kresge Literary Arts Fellow in Arts Criticism, Sharp writes for Art in America, Hyperallergic, The Believer, Sculpture Magazine, Flash Art, ArtSlant, and others. Sharp will give a lecture titled “Finding Evidence ? The Art of Detection in an Interdisciplinary Practice” on Wednesday, January 31, from 3 to 4 p.m. During her visit, Sharp will also serve as juror for SoVA’s annual Undergraduate Juried Exhibition.†

Artist Mark Dion creates large-scale installations and fantastical cabinets?modeled after Wunderkammer of the sixteenth century?that question established archaeological, museum, and scientific practices in contemporary society. His lecture titled “Mark Dion: Misadventures of a Contemporary Naturalist” will be on Tuesday, February 27, from 4:30 to 5:30 p.m. This lecture is part of Plastics@thePalmer series.

Zanele Muholi is a South African artist and visual activist. For over a decade, she has documented black lesbian, gay, bisexual, transgender, and intersex people?s lives in various townships in South Africa. Her lecture titled “Zanele Muholi: Visual Activism” will be on Tuesday, March 13, from 4:30 to 5:30 p.m. This lecture is part of Plastics@thePalmer series.

Visual artist Barbara Hammer rounds out the semester. Working primarily in film, she is widely considered a pioneer of queer cinema. She has directed more than eighty films throughout her forty-year career, including the world’s first lesbian films in 1974 (Dyketactics) and 1976 (Women I Love). Her lecture titled ?Canceled from Memory? will be on Tuesday, April 10, from 11:30 a.m. to 12:30 p.m.

Unless otherwise noted, lectures will take place in the Palmer Lipcon Auditorium, Palmer Museum of Art.†Lectures are free of charge and open to the public. For complete information regarding these amazing artists and scholars, visit: https://sova.psu.edu/anderson.

The Penn State School of Visual Arts John M. Anderson Endowed Lecture Series was established in 2001 through the generous support of John M. Anderson, Penn State professor emeritus. The result of Dr. Anderson?s love of the philosophy of art and painting, his endowment contributes to the creative and intellectual life of the campus. Dr. Anderson, an Evan Pugh Research Professor of Philosophy, was a longtime faculty member and three-time department head in the Department of Philosophy and the first director of Penn State?s Institute for the Arts and Humanities.