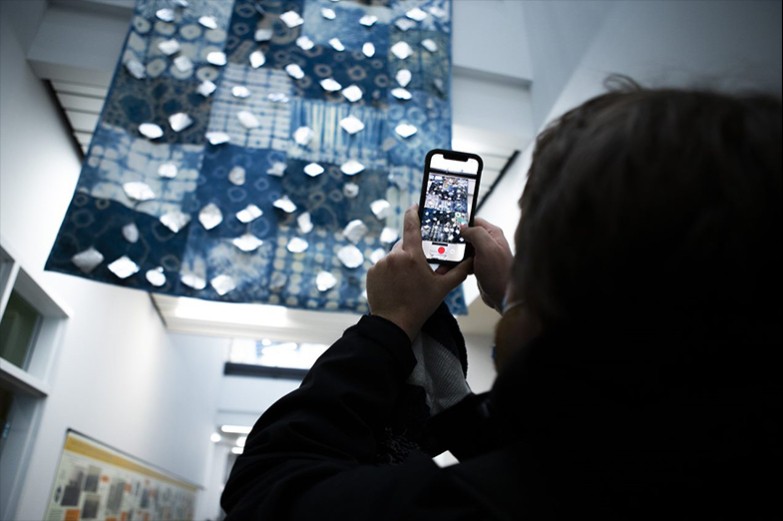 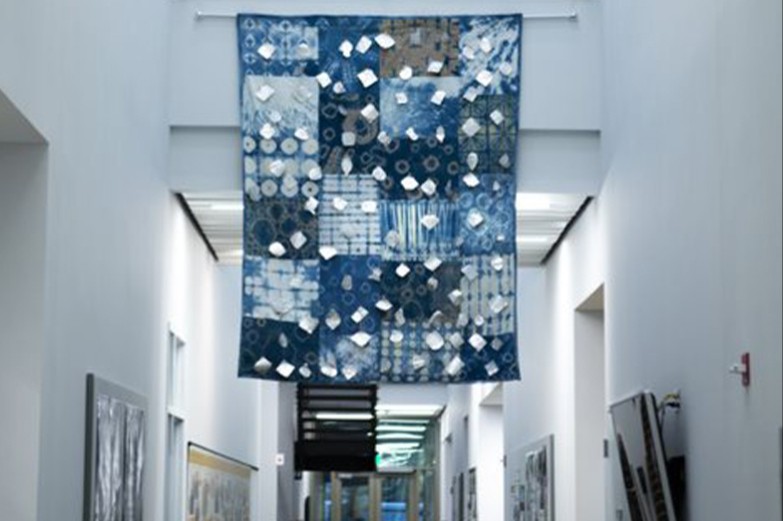 The basic idea of a quilt is to join things that appear different. But in the process of becoming interwoven, the differences fade, and the result is a blended work that is beautiful only because of its many parts.

Hanging in the hallway of the newly renovated Agricultural and Biological Engineering Building is “Augmented Encounters,” a 10-foot-long and 6-foot-wide quilt-like, interactive art installation that at first glance may look like just a quilt, but as users engage with the piece, they learn of a nonconventional collaboration that employed ancient art techniques in celebration of diversity, equity and inclusion.

When Karen Keifer-Boyd, professor of art education and women’s, gender and sexuality studies, was approached about the project by Michele Mekel, interim director of the intercollege Bioethics Program, she knew it was a perfect fit for what she calls participatory art pedagogy.

“We wanted to bring people together that don’t think that they have much in common or may feel isolated,” Keifer-Boyd said.

To get the project off the ground, Keifer-Boyd facilitated three workshops in October during which a group of faculty and students, through the lens of diversity, equity and inclusion, conceptualized and created the work.

The participants used the art techniques of Shibori indigo dying (Japanese manual tie-dying) and repoussé (ornamental metal with patterns made in relief by hammering or pressing on the reverse side). To create an augmented reality component, they embedded crafted spoken word messages in the piece, which users can access with a QR code.

“All of a sudden, you began to see this creative community occur across disciplinary lines,” Mekel said. “Folks were learning from each other and their intersectionalities, and it was lovely to witness.”

During the three Saturdays in October, the diverse groups engaged in lively discussions that ultimately led to writing, drawing, dying, sewing and metal work. The art activities were naturally familiar to the College of Arts and Architecture group, but for some of the engineers, creating art was a new experience.

Suat Irmak, head of the Department of Agricultural and Biological Engineering, said he used the workshops not only to connect across disciplines and learn about making art, but also to share with his family the opportunity to learn from and connect with others.

“I brought my wife, my younger daughter who is 15 and my son who is 6 and a half, and we immediately got involved and started making art and watching others. There was a sense of community,” Irmak said. “I had personally never done art myself and it was an amazing experience.”

Irmak came to Penn State in July of 2021 and still being new to the community he said the “Augmented Encounters” workshops gave him the opportunity to show his family the Penn State that he was quickly growing to love.

In terms of inclusion, racial equality, diversity and respect for people from different backgrounds, Irmak said that at Penn State he and his family are having a more positive experience in comparison to the time spent at his previous institution and state.

“At Penn State people are from many different parts of the world, but we come together, and it is amazing to see the commonalities we share,” Irmak said. “I know this, and the idea of diversity, equity and inclusivity is what I want to contribute to Penn State, but when this project was over my daughter said to me, ‘this was a wonderful example of bringing people together.’”

“Augmented Encounters” was permanently installed in December, which means students, faculty, staff and visitors to the building are now greeted by the rich, blue-toned piece with metal charms that shimmer in the light and stories that can be heard with the push of a button.

The pride around the “transformative” artwork can be heard within the voices of those who took part in its creation, but those voices also ask the same question—“when will we get started on the next one?”