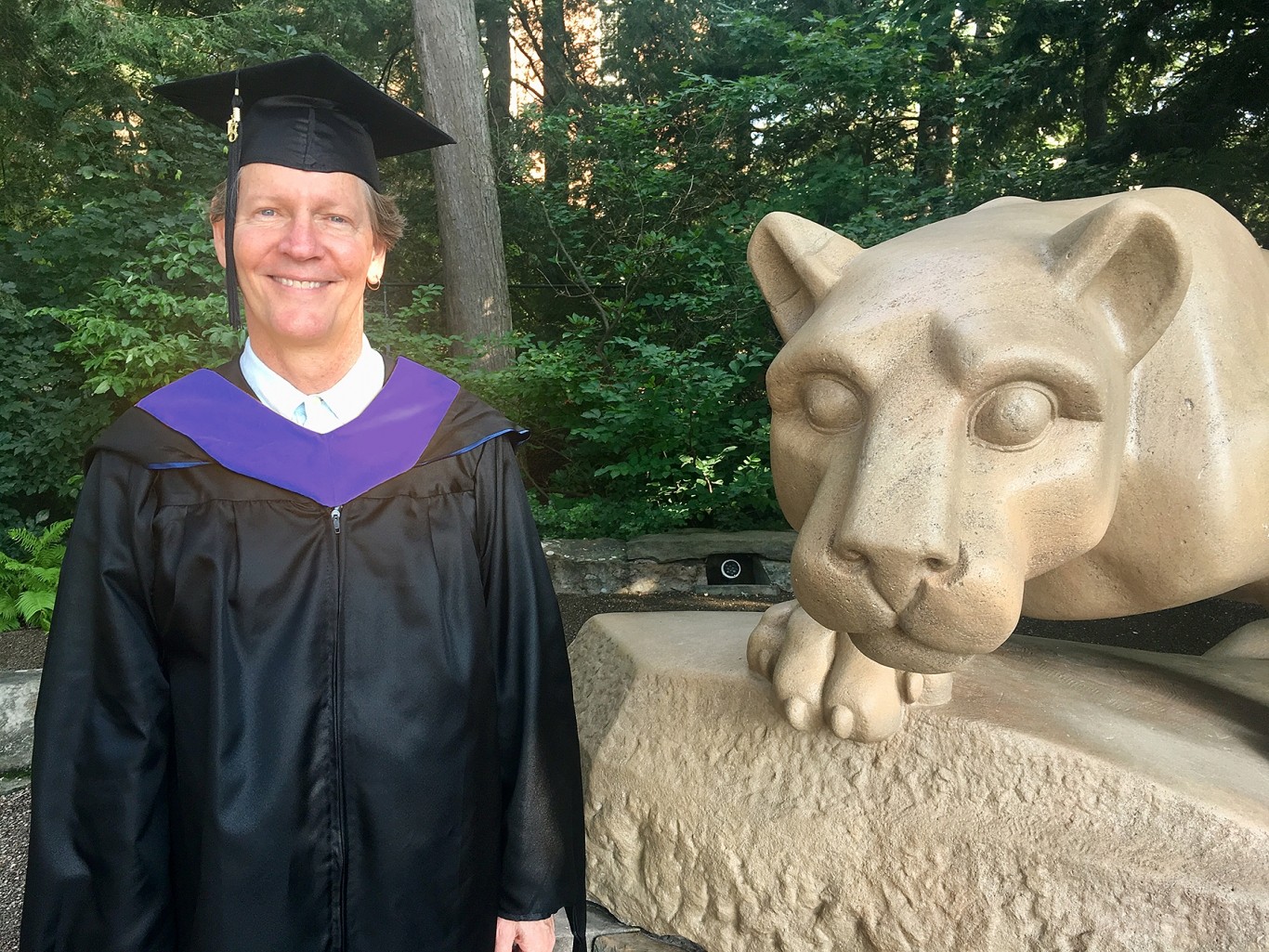 How do you encourage a diverse set of stakeholders with competing interests to agree on a design while incorporating their values and priorities? Shannon McElvaney says the answer is to use Geodesign.

Shannon McElvaney is the first to complete a master’s degree in Penn State’s new program: Professional Studies in Geodesign. His attendance at his graduation ceremony on August 11th 2018 will be his first visit to any Penn State campus.

McElvaney has traveled and lived around the world for his work in GIS mapping and geodesign. Originally from California, he has worked and resided in Spain, Hawaii, Abu Dhabi and currently in Colorado. Due to the online program’s flexibility, he was able to continue working as the Community Development Manager at Esri (a GIS software company) and currently as the Geospatial Information Officer at WISRD (a startup working in resilient infrastructure) while completing his Geodesign master’s degree.

McElvaney is not the typical student because he had already written a book on geodesign before he began the degree, but he explains, “I wanted to get an advanced degree in Geodesign because I already had mastered the GIS component, which is very rational and science-based, but I was missing the ‘design-thinking’ part. That’s what really drew me to the Penn State geodesign program.”

In a roundabout way, McElvaney’s work in Abu Dhabi led him to Penn State’s online geodesign program. He was working as the GIS Manager for CH2M Hill, to create the first 100 percent sustainable “smart city” in the world, called Masdar City. It relies solely on solar energy and other renewable energy sources.

“For Masdar City, we used GIS to examine the master plan data and run different models to demonstrate if and how we would reach the goals for zero carbon and zero waste in the city.”

While working on the project, McElvaney spoke at a conference in London attended by a representative from Esri (the GIS software company used both in Masdar City and the Penn State Geodesign program). “They came up to me after the presentation and said, ‘this is the first Geodesign project we have ever seen,’ and I said, ‘What is Geodesign?’” He laughs, “It turns out that Geodesign is exactly what I had been doing in the desert.” He was subsequently hired by Esri to write his book, Geodesign: Case Studies in Regional and Urban Planning (2012).

According to McElvaney, “Geodesign is a powerful participatory planning method that uses stakeholder input and geospatial analytics to show the possible impact of design scenarios.” It gets its strength in two ways: 1) the diversity of participants (government representatives, engineers, domain experts, residents, businesses and more), and 2) through spatial analytics, which provides a visual representation of the world as it is currently, and as it could be with the new implementations.

“For example,” McElvaney explains, “Geodesign models how the world works – like the flow of water across the landscape, or the flow of traffic.” By using the data and a rational framework, one can see how the design interacts with those existing processes. “Then you can add people’s input on top of it and see if it performs as desired.”

The design evolves based on stakeholder’s viewpoints and the collaborative, conversational process leads to innovative leaps. He describes the ‘systems approach’ as “a blend of art and science” and a creative process that brings innovative solutions to problems within cities.

Reflection on the Program

McElvaney had countless positive things to say about his experience within Penn State’s master’s program, including his teachers’ real-world experiences, which he learned from and applied instantly in his own work. “For example, I did a project on regional planning for parts of coastal Florida that are already feeling the impact of sea-level rise using tools I learned in class, and within two weeks I had conversations with counties in the region” about proposed solutions.”

He also benefitted by broadening his network. The guest lecturers were leaders in their fields, who in some cases became resources or advisors to him. In addition, even though they didn’t meet in person, he learned from the participation of his six classmates from around the world. “My classmates included an oil field worker from North Dakota, a stream scientist from Minnesota, an urban planner from Mexico, and another planner from Australia, to name a few. I sometimes feel like I learned as much from classmates as from the professors.”

As a program requirement, McElvaney completed a capstone project that happened to be in his own community: Manitou Springs, Colorado. He provided pro bono geodesign consultation for the city’s long-desired creek walk along Fountain Creek.

The city will be incorporating his plans into the future development. “This is a testament to the power of geodesign,” he said. “There is a fear that when you involve the public, it might cause project delays, but with Geodesign, it’s the opposite. It’s defensible. It’s transparent. It’s positive, and it actually drives forward a decision that is acceptable to the people.”

According to McElvaney, “people are gravitating towards these geodesign programs because when you pull all of the systems together, you can see the whole picture and solve the ‘wicked’ problems of the world. You are creating a design that makes a better park, a better city, a better world.”