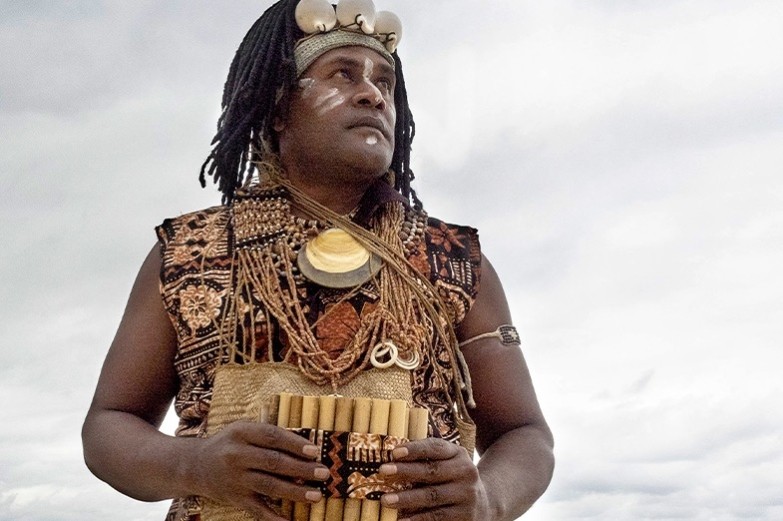 The Center for the Performing Arts and Sustainability Institute will partner to host two of the artists featured in the musical film “Small Island Big Song: An Oceanic Songline.” The free public Earth Day panel discussion will start at 7 p.m. Thursday, April 22. It will be available via the Zoom conferencing app and will be followed by an open Q&A and short performances by the artists.

Visit panel discussion to register and for more information.

Spoken-word artist Selina Leem, of the Marshall Islands, and musician-archivist Charles Maimarosia, of the Solomon Islands, will discuss ocean conservation, environmental justice and the consequences of climate change, and the role the arts can play in creating change.

Maimarosia, a master of his traditional Are’Are music lineage, plays instruments such as the Awwa and Au-Rerepi (pan pipes). He’s the frontman of the pan-pipe band Narasirato, an indegenous music group formed by fishermen and famers. The band has found success with well-received performances at musical festivals worldwide, including Roskilde Festival, Fuji Rock, and Glastonbury.

“Today’s popular music tells us, this is how the world is. It is not, it does not connect us, it doesn’t conserve our place,” Maimarosia said.

“In our globalized, computerized world, music can bring us awareness of who we are, our history and our values, and our connection to nature. I bring what my grandfather poured into me,” said Rapa Nui-based musician Yoyo Tuki.

The program is part of the Center for the Performing Arts 2020–2021 “Up Close and Virtual” season. The presentation also is part of the “The Reflection Project,” funded by The Andrew W. Mellon Foundation.

Watch a trailer for the video presentation.

The live touring production of “Small Island Big Song,” including an artist residency, is scheduled for the center’s spring 2022 season.