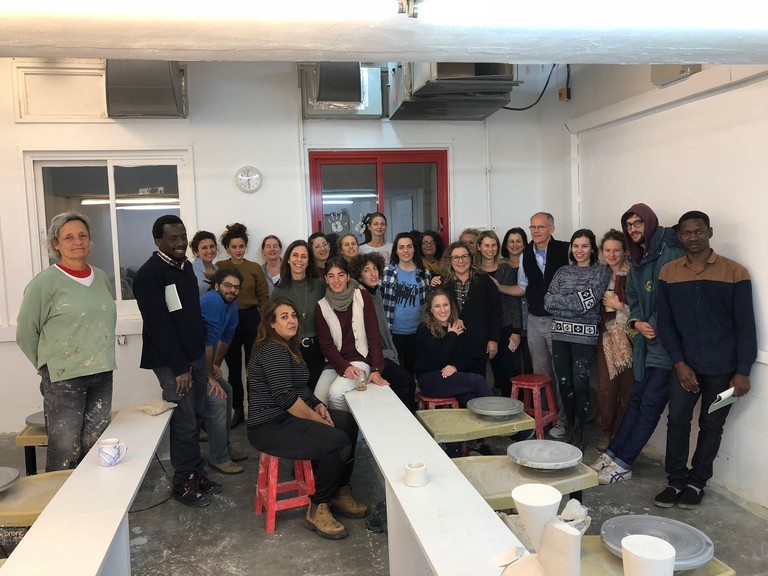 Distinguished Professor of Art Chris Staley recently spent two weeks as a visiting artist at Bezalel Academy of Arts and Design in Jerusalem. Below he reflects on his experience.

After flying more than 10 hours from Newark, New Jersey, to Israel, it felt surreal standing in front a group of students in Jerusalem. It wasn?t just the jetlag and lack of sleep that seemed unusual; it was the class of students.

The students were the most diverse group of people I had ever taught: Muslims and Jews, both orthodox and secular; students from Africa, Europe, Mexico; all with amazing stories on how they ended up here at Bezalel Academy of Arts and Design in Jerusalem, studying the ceramic arts.

As a potter and an educator, I often demonstrate a myriad of techniques I use to create everything from teapot spouts to abstract sculpture. However, teaching art is more than just sharing techniques; it is about helping students find their own artistic voice. In doing this I always ask students questions, in hopes that thinking about the questions may provide insights into what they want to express artistically.†

The late British artist Barbara Hepworth once said, ?Perhaps what one wants to say is formed in one?s childhood, and we spend the rest of our lives trying to say it.?

With Hepworth?s quote in mind, I asked the Bezalel students, ?What event or circumstance in your childhood has influenced who you are and what you might create as an artist?? Each student wrote a response to this question and then verbally shared his or her answer with the class.†

One student said, ?My parents never allowed me to close my bedroom door even when I was a teenager. I think creating art gives me a chance to create my own private space whenever I want. Making my own art is like giving myself permission to close the door.?

After all the students finished sharing their personal thoughts, I asked them what they thought of the exercise. Some said, ?I learned some things about myself I didn?t know.? Others said, ?I learned things about my classmates I never knew,? and others said, ?I feel less alone.? Ironically, after years of teaching, I have found that the more personal a student?s artwork, the more universal it is. Who among us has not experienced the joys and sorrows of life?†

No place on earth seems more steeped in religious history than the ?Old City of Jerusalem.? Within the city are the ancient remains of the Temple Mount, called ?The Wailing Wall.? This wall is the most sacred place in the Jewish religion, where earth and heaven meet. There is the ?Dome of the Rock,? an Islamic mosque and holiest of sites where it is said Mohammed rose to heaven. And there is the Church of the Holy Sepulchre, where many believe Jesus was buried and ascended to heaven.†

Jerusalem is an intense place. This intensity is understandable with the seminal history of three major religions, Judaism, Islam, and Christianity, converging in one place. When I entered the ?Old City? through Jaffa Gate, where there were often Israeli soldiers standing guard with AK-47 machine guns, it was a stark reminder of the centuries of conflict and violence stemming from religious differences.†

In contrast to the tension found in the divided city of Jerusalem, working with faculty and students at Bezalel Art Academy felt like an oasis of harmony and cooperation. What is it about art that has the potential to bring people together?