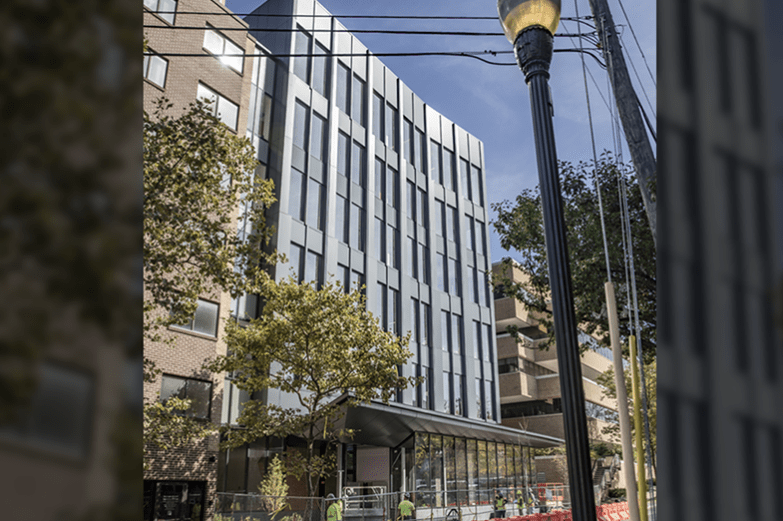 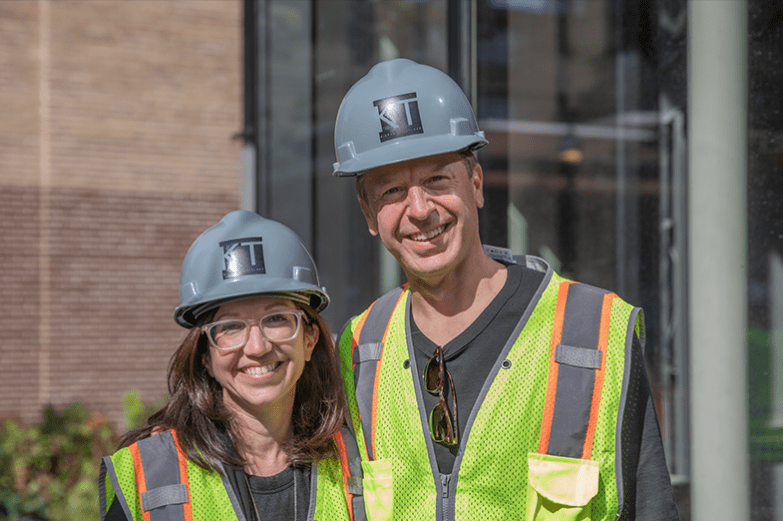 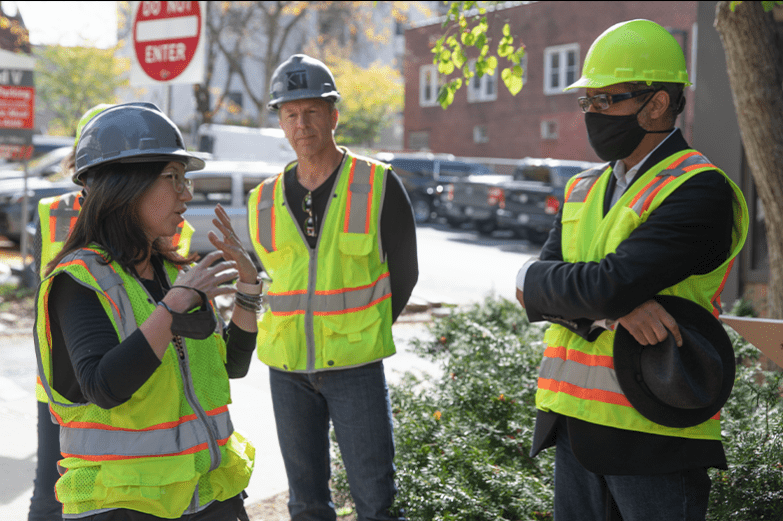 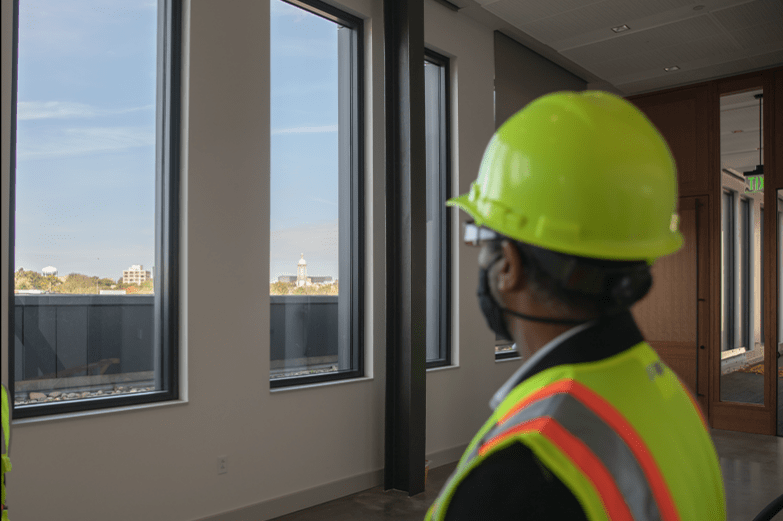 UNIVERSITY PARK, Pa. – It might be difficult to pass by the newest building on South Burrowes Street in downtown State College and not think it looks more than a bit out of place. With its sleek lines, bold color and largely glass and metal facade, it stands out among the beige brick and opacity of surrounding University office buildings — and with its uniqueness comes intrigue, a sense of wanting to see more.

Take a few steps closer to the seven-story, 85,000-square-foot structure to peer in through the large vertical windows and you will have a direct sightline to a generous makerspace area, complete with colorful collaborative workstations and a welcoming meeting space. Walk around the corner of the building toward Calder Way to find a walkway between the structure and the alley and get a glimpse of 3D printers, CNC machines and painting and welding booths.

According to Smith, a partner at KieranTimberlake, that sense of intrigue and inquisitiveness plays into the role the building is intended to embody within the University and the greater State College community.

“The building was designed to have a prominent engagement with the street, to stand out among the anonymous buildings that occupy the block, and to make an immediate and lasting impact in State College,” said Smith.

Located at 123 S. Burrowes Street, the structure is designed to instill a feeling of opportunity, of collaborative making, of being a part of something bigger that oneself.

“We wanted to bring the community into the space, and to have the activity and positive energy inside the building visible and accessible from the exterior,” said Rodrigues.

For Rodrigues, a principal at KieranTimberlake and a 2018 recipient of the College of Arts and Architecture Alumni Award, the ideas that were instilled in her as an undergraduate student had a direct impact on the design decisions she made for the new space.

“As architects, we aim to understand the broader impact of design,” she said. “It can be easy to get lost in the requirements of a particular space. Here, it was essential that we focused on how this project could influence the community and how it could expand the goals established by the University and Invent Penn State.”

For Smith, it was important for them to associate the new building with the University but to redefine what a “Penn State” building could be aesthetically.

“Penn State is steeped in a rich architectural history, which has traditionally been shaped by brick and stone.  We want to honor that story and extend it with a contemporary approach that is both novel and memorable, inviting people to explore the legacy of the past while looking to the future,” he said. “We worked to optimize daylight and visual connectivity throughout the space, which welcomes collaboration and sharing.”

Important to both Rodrigues and Smith throughout the design process was having a clear intention behind every design decision, paying attention to even the smallest detail. Some of those details include floor-to-ceiling windows on the sixth floor that offer framed vertical views of the Old Main bell tower and the library on one side and the mountains on the other, wood finishes in hickory, cherry and oak (all native Pennsylvania tree species), and operable windows with sensors that turn the heating or cooling off when they are opened.

“We didn’t come into the project with any preconceived ideas of how this building should ‘look’,” said Smith. “We talked to leaders at Invent Penn State, the LaunchBox and other occupants to discover what was critical for their success, we worked with the Office of Physical Plant to understand the wider University priorities, and there was a great deal of positive dialog until we reached a place of understanding and cohesiveness in the design and urbanism of the building.”

For Rodrigues, it was an honor to come back to campus and help define a new University presence downtown that is intended to create excitement, community involvement and inclusion.

“It was a challenge to design a building with the energy and spirit of the University in a location downtown, but it was also a tremendous opportunity to showcase the great work that’s being done by not only the University but the wider State College community every day,” she said.

Smith echoed his colleague’s sentiments and added that the personal nature of the project will be something he cherishes moving forward.

“This is first and foremost a space to engage the community … and it is a design thinking space. What I’m most looking forward to is watching the building being used, taking in the activity and the collaboration that happens here and knowing that we helped foster that in a setting that always holds a special place for us,” he said.

The College of Arts and Architecture is well-represented in the latest issue of Research Penn State.

A new book co-edited by Rahman Azari, associate professor of architecture, offers a variety of perspectives and first-hand experiences from scholars and experts in building science