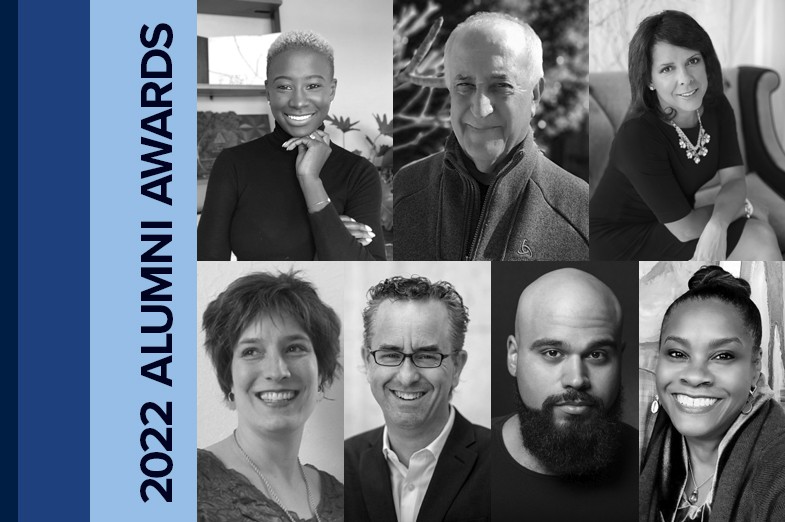 College of Arts and Architecture to honor Alumni Award recipients on Oct. 14

The College of Arts and Architecture will honor its 2022 Alumni Award recipients during an in-person ceremony, open to the public, on Oct. 14 at 4 p.m. in the Palmer Lipcon Auditorium. The ceremony will also be livestreamed on the college’s YouTube channel.

The Arts and Architecture Alumni Awards were established more than 30 years ago with the purpose of recognizing the career achievements of Penn State alumni in the arts and design disciplines.

While on campus, the returning alumni connect with students and faculty and often deliver lectures. Read more about their accomplishments below.

Samantha Josaphat is an architect and the founder of Studio 397 Architecture, a reference to her becoming the 397th African American female architect to achieve licensure in U.S. history. She teaches at The Bernard and Anne Spitzer School of Architecture at City College of New York and served as president of the New York chapter of the National Organization of Minority Architects in 2019–20. Her many recent honors include the 2022 Civita Institute Partners in Design Climate Action Fellowship and the 2021 Anna Hernandez/Luna Textile Visionary Award.

Josaphat will deliver a lecture on Oct. 13 at 1 p.m. in the Stuckeman Family Building Jury Space.

William Eisler began his career teaching Renaissance art at the University of Sydney and later curated the Australian Bicentennial Exhibition Terra Australis at the Art Gallery of New South Wales. An interest in objects contained in princely and scholarly collections led to an engagement with coin and medals in French-speaking Switzerland. From 1997 to 2013 he was a curator at the Cabinet des médailles cantonal, Lausanne. In 2008 he received the Rome Fellowship from the Paul Mellon Centre for Studies in British Art. More recently he has participated in four colloquiums on the medals of Louis XIV. In 2013 he was named a Fellow of the Society of Antiquaries of London.

Katherine O’Hara is the founder of The O’Hara Project, a marketing, PR and ideation firm based in Morristown, New Jersey, whose client roster includes Fortune 500 companies, startups and nonprofits. Her 28-year career has earned her national and global experience and more than 200 awards, including Hispanic Chamber of Commerce Businesswoman of the Year. After earning her M.B.A. at New York Institute of Technology, the school’s alumni magazine named her “One to Watch.” O’Hara is frequently tapped as an industry expert by outlets like MSN, AMEX OPEN Forum, and CBS.

O’Hara will deliver a lecture on Oct. 13 at 6 p.m. in the Stuckeman Family Building Jury Space.

Tavis Huth Dockwiller is the principal of Philadelphia-based Viridian Landscape Studio, which she founded in 1999. Her belief in the essential and healing power of landscapes drives all of the firm’s design projects and ecological master plans. She is active in her professional community as a member of the American Society of Landscape Architects and a fellow of the Design Trust for Public Space. She sits on the steering committee of the Design Advocacy Group and the advisory council of the Community Design Collaborative, which provides pro-bono design services to nonprofits. As a co-author of 21st Century Parks for New York City, she instituted a paradigm shift in the operation of the city’s parkland.

Dockwiller will deliver a lecture on Oct. 13 at 4 p.m. in the Stuckeman Family Building Jury Space.

Andrew Davis is founding dean of the Kathrine G. McGovern College of the Arts at the University of Houston. A music theorist by training and a longtime board member of the Texas Society for Music Theory, he has published and lectured widely on opera and instrumental music of the Romantic and late-Romantic periods. Davis served previously as director of the Moores School of Music and as associate dean of the Honors College, both at the University of Houston. He holds a Ph.D. in music theory from Indiana University.

Paul-Jordan Thomas Jansen is an award-winning actor, artistic producer and educator living in the Chicago area. For more than a decade, he has been performing musical theatre classics, new works and world premieres on stages across the world and at notable regional theatres. When he was 19, he developed a program in northeast Ohio that focused on preparing students for their collegiate theatre auditions and has continued to help prepare students for the collegiate and professional worlds of theatre. He believes in helping young theatre artists feel a sense of belonging so that they may become cultivators of change in the industry.

Nashormeh Norma Lindo is an artist, educator, independent curatorial consultant and arts advocate whose career experiences span public school teaching, museum education, higher education and professional art studio practice. A mixed media artist, her work has been exhibited nationally and internationally. She has published several essays on subjects related to Black American art, history and culture, and was the first African American woman chair of the California Arts Council. She holds an M.S. in Museum Leadership from the Bank Street College of Education.