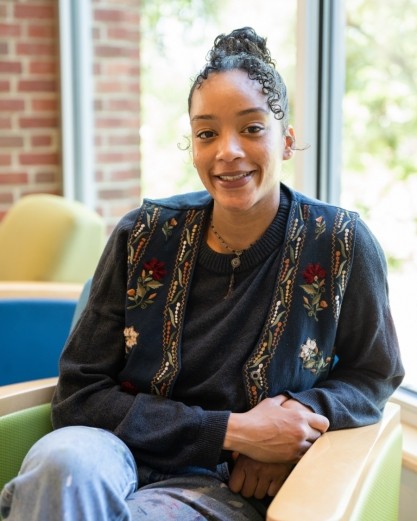 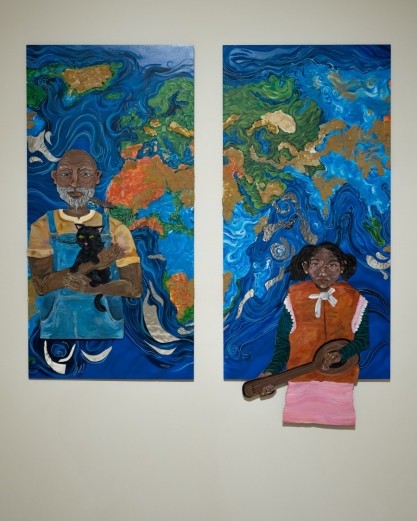 “I knew I had it,” she said. But when she asked to attend a high school for the visual arts, her educators were dismissive.

“My teachers kind of mocked me in middle school because I didn’t have a sketch book or a portfolio. I just had these pieces of paper in a manila envelope,” she said in an interview with the Center for the Performing Arts at Penn State.

“I wasn’t really encouraged to pursue art just because of where I grew up in the south Bronx. You had to have the portfolios and the supplies, and I didn’t really have access to that.”

Zhané, who started at Penn State in 2012 in pursuit of a degree in human development and family studies, transcended the lack of support to become an artist on her own. One of her creations, “An Adjustment,” is part of an exhibition, “C/O Commonwealth,” at the HUB-Robeson Galleries Arts Alley through July 25.

“C/O Commonwealth” — including sculptures, wall drawings, murals and installations — was conceived in reaction to the five pillars of the United Nations Sustainable Development Goals: people, planet, prosperity, peace and partnership.

The Center for the Performing Arts commissioned the Zhané work, which includes four paintings of personas the artist imagines living in the late 21st century. The figures appear against a stylized background of Earth’s continents and oceans. The acrylic-and-spackle paintings on wood, with attached paintings on cardboard, deal with the issues of immigration, climate change, mental health and racial injustice.

“Our engagement staff discovered that the wonderful women of the HUB-Robeson Galleries (Lindsey Landfried, curator, and Sarah Kipp, exhibition coordinator), with whom we have collaborated on a number of projects, were seeking proposals for an artist collaboration for their summer exhibition. The themes of the exhibition really resonated with us and our work,” said Amy Dupain Vashaw, the center’s audience and program development director.

“For the application, there were two options: either you’d already identified an artist with whom you’d like to work or the HUB Galleries staff would match the applicant with an artist. We fell into the latter category and were so excited to be paired with Tiara,” Vashaw said. “After a few initial planning meetings to ensure both the center’s vision and Tiara’s ideas were in synch, we collaborated in earnest on the ideas you now see come to life in Art Alley.”

Zhané’s creation ponders what will happen if humans don’t make adjustments to their ways of living.

“The themes for each of the personas tied into upcoming center presentations, themes such as climate change, inclusivity for folks who live with disabilities, elderly people who may be subject to feelings of isolation and racism,” Vashaw said. “Many of the presentations we select have social justice focused ideas at their heart, and this exhibition was a way to extend those ideas through the lens of a visual artist’s eyes.”

After two years at Penn State Hazelton, where she competed on the volleyball team, Zhané studied at University Park. But in 2016 she returned to New York City without having completed her degree. In 2019, she came back to State College determined to earn a diploma — she said she’s about one semester’s worth of courses shy of a bachelor’s degree — and to pursue her art.

“I was happy to get away from New York. I felt very on edge in New York,” she said. “I want to keep telling the story of the people. I got a lot of things in mind as far as how I want to share my story and how I want my story to impact others.”

Earlier this year, she became the first artist to have a window exhibition at 3 Dots Downtown, where she worked as an administrative aide before the pandemic. Now she has a job at a supermarket to pay the bills. She also trains as a boxer.

For me, ‘An Adjustment’ (represents) the adjustments we’re going to have to make as communities, as people, as individuals in order to survive what’s coming in the future. … Just seeing different ways we can adapt to the changes that are inevitably going to come.”

Question: Did you come up with the title of your work in the exhibition?

Answer: I did. For me, “An Adjustment” (represents) the adjustments we’re going to have to make as communities, as people, as individuals in order to survive what’s coming in the future. … Just seeing different ways we can adapt to the changes that are inevitably going to come.

Question: What are the four themes you came up with for the panels?

Answer: The first figure is a college student, and he’s dressed in Army fatigues with his cap-and-gown hat on. He’s representing the rising cost of college tuition. In the future, if the price keeps going up, I don’t see someone going to college for a liberal arts degree. … Looking back, I wish I had joined an ROTC program to cover some of the costs.

Question: The next panel?

Answer: The next one is the elderly man with the cat. He is supposed to represent an isolated elder in the future. I feel like in our culture we don’t treat our elderly in the best ways we should. … It also represents the rising cost of what it is to have a family. … I’m predicting more people not willing to start a family and just ending up alone.

Answer: That’s the migrant refugee. … That would represent the migration due to flooding and droughts and things like that.

Question: And the last panel?

Answer: The last panel is to represent a working-class adult. They wanted it to have a disability, so I put her disability as mental illness. She’s a firefighter. It’s supposed to represent the rising need for first responders for forest fires and things like that.

Question: Are sustainability issues something you think about a lot?

Answer: I feel like it’s something that’s always in the back of your mind. Working on this project is something that opened my eyes to it more, and I actually realized how much I don’t know.

Question: When did you start painting?

Answer: I had more access to supplies and opportunities once I got to college. But I did an internship in photography and then another in programming at the Apollo Theater before I came to college. I knew I wanted to be creative in some way, but I didn’t know how to approach it.

John Mark Rafacz is the editorial manager for the Center for the Performing Arts at Penn State.