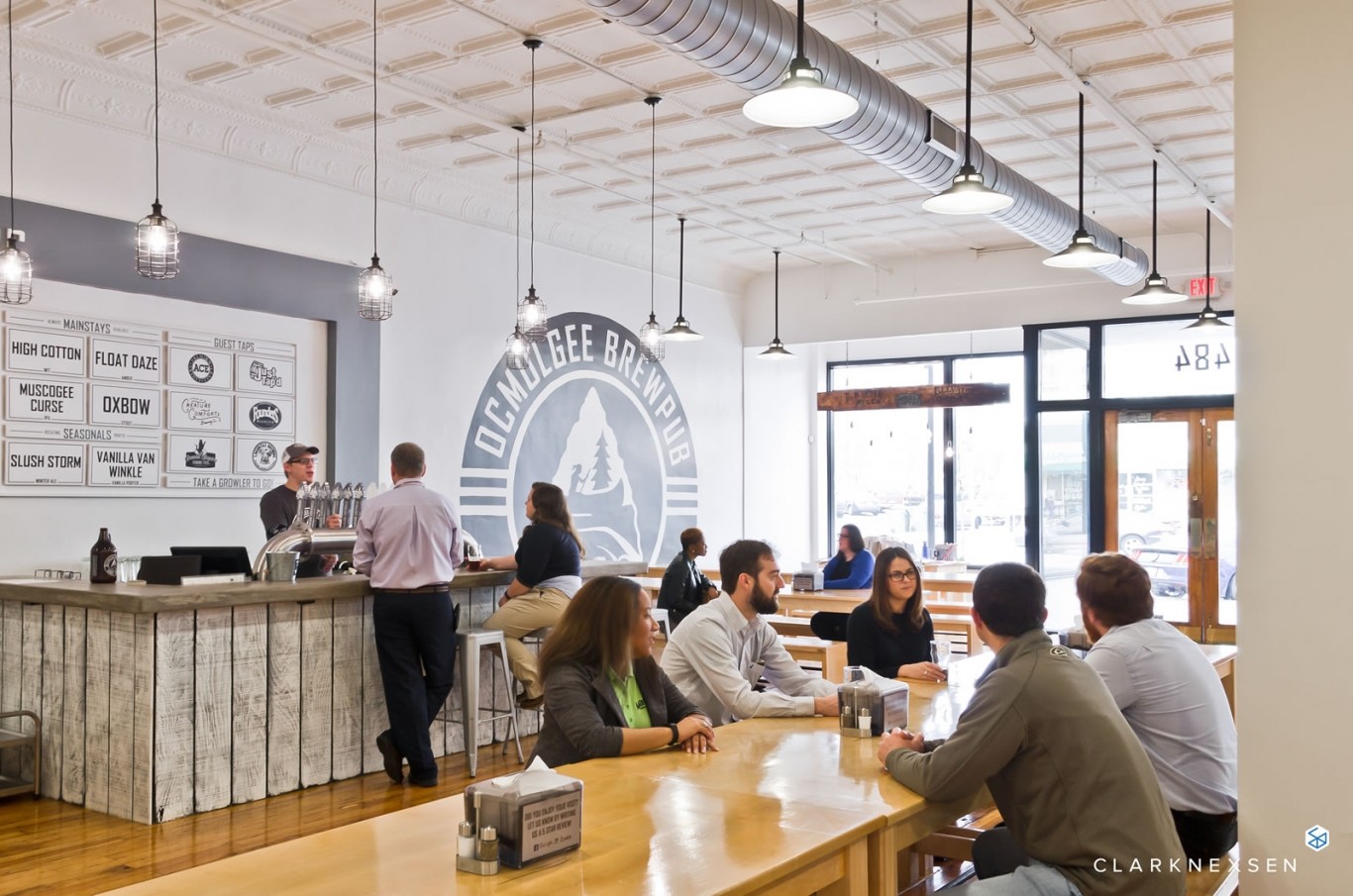 ‘Free beer for life’ as a benefit of a ‘platinum membership’ to a brewery in Georgia is not the typical return one would expect from a degree in Architecture; however, alumnus Ryan Oldach (B.Arch 2015) has a story that elucidates this trajectory.

During his fourth year studying architecture at Penn State, Ryan Oldach was given the task to create a site-specific open design for a group studio project. His group, which included Rebecca Smith and TJ Chambers, decided to design a brewery which they named “The Chesapeake Waters Brewing Company.” They took great care to highlight the natural elements of the site by incorporating the creek and other local features into both the design and beer production process. They wove together an elaborate story about their fictional brewing company; the team went as far as to create logos for the beer with detailed descriptions of each recipe. To top off the project and add some flare to their final presentation, they even brought a “six-pack” for sampling.  Little did Oldach foresee, this project ended up playing an important role in his career.

When Oldach graduated from the Stuckeman School in 2015, he was almost immediately hired by Clark Nexsen (an architecture and engineering firm) at their Macon, Georgia, office. Oldach and colleagues often frequented a small local bar after their work day. “One day the owners approached us about wanting to open a new brewpub. After back-and-forth discussions of what the owners had in mind, including similar aspects to my undergraduate project, my Clark Nexsen team and I moved forward with interest in the project and presented a few design ideas to them.” The client responded with interest from the start. “During our meeting, I presented my entire fourth-year studio portfolio highlighting that someone on our team had experience designing breweries (since Clark Nexsen had not designed a brewery before). This impressed the owners enough that they felt more comfortable selecting Clark Nexsen to pursue their desired design.” Oldach had been with the company just six months, and here he was, yielding a commission with his own designs.

Since Oldach is still a designer and is completing his ARE exams before he becomes an architect, his boss was the lead architect. They worked together over the course of fifteen months to complete the design process. When it came time for the finishing touches, Oldach mentioned to the brewpub team that he had created a logo for his fourth-year studio project. The clients suggested he add it anonymously into the selection of designs, and fortuitously they chose Oldach’s logo. “Though I do a lot of it, I had no formal background in graphic design, but I was thrilled to incorporate another form of design into the project.”

In January 2017, the Ocmulgee Brewpub (the name references local native heritage) had its grand opening. It is proudly the first micro-brewery in central Georgia. Oldach gives a lot of credit to his team, which includes Nick Vaughn AIA, Wade Williams PE, and Sarahgrace Godwin. Oldach has since moved to Clark Nexsen’s Virginia Beach office, so he no longer lives near the brewery, but he still uses his platinum membership whenever he visits Macon.

Due to Oldach’s exemplary experience transitioning from student to professional, architecture instructor Eric Sutherland invited Oldach to present to fourth-year undergraduates in the fall 2017 Arch480 class. Oldach delivered a talk titled “Influence of Undergraduate Work in the Professional Realm” and engaged with students in studio. He encouraged students to explore their passions in their work as undergraduates, because, ultimately, they can utilize their ideas and render them relevant in their future career. Oldach demonstrated how the knowledge and experience he gained in school helped him and his current company, Clark Nexsen, to design the Ocmulgee Brewpub.

Oldach has goals to eventually design recreation and sports-based architecture, namely stadiums, arenas, and large-scale designs, but meanwhile he is enjoying his time ‘cutting his teeth’ as an architectural intern for Clark Nexsen. He hopes his story serves as inspiration to current architecture students to dedicate care to their school work, because “you never know, an undergraduate project may advance your future career in unexpected ways.”

Darshika Agrawal, a master of architecture student within the Stuckeman School, was named the recipient of the 2021 Jawaid Haider Award for Design Excellence in Graduate Studies.