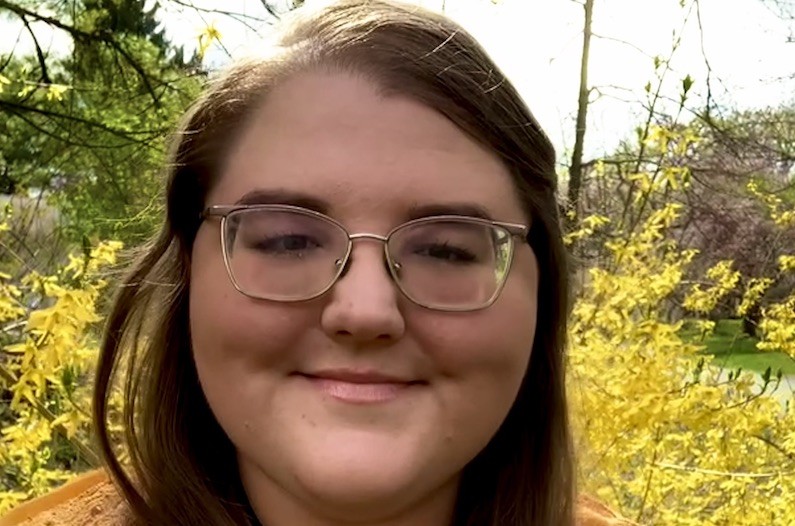 Crystal Dahm, of Boalsburg, Pa., has been named spring 2021 student marshal for the College of Arts and Architecture. She will receive a B.F.A. in Theatre and B.S. in French and Francophone Studies during the college’s commencement ceremony on Saturday, May 8.

Dahm began her undergraduate studies in the College of Health and Human Development, where she conducted research in the Brain and Behavior Lab. That work resulted in a poster presentation at the Undergraduate Research Exhibition, and publication in two scientific journals. When she shifted her academic focus to theatre, she quickly got involved in numerous School of Theatre productions, in addition to working at Eisenhower Auditorium, the Bryce Jordan Center and other campus venues. Dahm served as the director of production for the student-run music festival, Movin’ On, in addition to holding internships and staff positions at theatres across Pennsylvania and beyond. Following graduation, Dahm will work at the Santa Fe Opera for the summer season, after which she plans to teach English abroad.

The College of Arts and Architecture has also named eight academic unit marshals:

James Graef, of State College, Pa., is a Schreyer Scholar and will receive a Bachelor of Architecture and Bachelor of Science in Community, Environment and Development. In 2019, he received an Erickson Discovery Research Grant to study public transit operations in Northern and Central Europe, examining best practices that could be adopted in the United States. His undergraduate thesis imagines a pedestrian, bike and transit bridge extending the ‘public plane’ between Lower Manhattan and Jersey City across the Hudson River. Graef serves on the State College Transportation Commission and advocates for dense, mixed-use, transit-oriented development in the Centre Region. He plans to work to make transit more efficient and cities more livable. This summer, Graef is backpacking more than 2,000 miles of the Pacific Crest Trail from Los Angeles to the Canadian border.

Pauline Conscience, of Paris, France, will receive a B.A. in Art History. She spent her undergraduate career visiting museums to experience art and will intern in an art gallery in New York this summer. Conscience is a member of the Penn State Fencing Team, as well as the French Fencing Team. Next fall she will continue her studies at Penn State, pursuing a master’s degree in management and organizational leadership with the goal of working in a cultural organization.

Christie Warren, of Schwenksville, Pa., will receive a Bachelor of Design in Graphic Design. She has focused her studies on user experience and user interface design. Warren was the sole designer on the first-place teams in the nine-month Nittany AI Challenge in both 2018 and 2019, which has inspired her to work toward using design to allow technology to have a greater and more positive impact on those who use it. She currently serves as a reviewer for the Nittany AI Challenge. Warren has spoken at events including the President’s Tailgate, the annual Penn State Outreach and Online Education Appreciation Dinner and the February 2020 Board of Trustees meeting. In 2020 she received a Creative Achievement Award from the College of Arts and Architecture. After graduation, Warren will work as a UX designer at KiwiCo, a company that encourages kids to learn about STEAM topics.

Integrative Arts
Natalie Ondrey, of Malvern, Pa., will receive a B.S. in Secondary English Education and a B.A. in Integrative Arts, with minors in English, music studies and theatre. She has been involved with Lion Ambassadors, Stand for State, Outdoor School, Concert Choir, Mortar Board, No Refund Theatre, THON and the College of Education’s D.C. Social Justice Fellowship. She also served as a student staff coordinator for Student Orientation and Transition Programs, as well as president and vocal director for the Penn State Thespian Society. Ondrey has spent her four years at Penn State thoroughly involved with education, arts and advocacy, and hopes to continue this post-graduation as a high school English and theatre teacher.

Landscape Architecture
Madison Borsos, of Burgettstown, Pa., will receive a Bachelor of Landscape Architecture. She has focused her studies on the relationship between landscapes and communities’ collective memories. Borsos has been active in Students for Environmentally Enlightened Design, and last year was the Department of Landscape Architecture’s nominee for the College of Arts and Architecture’s prestigious Golumbic Scholarship. Her experiences at Penn State have inspired her to strive for meaningful engagement with the individuals and communities for whom she designs. After graduation, Borsos plans to work at a design firm as a junior landscape architect.

Music
Brianna Wiegand, of Lansdale, Pa., will receive a B.A. in Music Technology and B.A. in Film Production. She has focused her studies on sound design and music composition in film. In the School of Music, she was a recording studio engineer, percussionist and president of the Percussion Club. Under director Dennis Glocke, she performed in Carnegie Hall for Penn State’s President’s Concert last year. She interned for the American Pavilion during the 2019 Cannes Film Festival. Wiegand currently works as a dance instructor at MindBodyArt School of Dance in State College, teaching tap, jazz and ballet for competitive and recreational students of all ages.

Theatre
Jasmine Forsberg, of Orlando, Fla., will receive a B.F.A. in Musical Theatre. While at Penn State, she has been seen onstage in numerous productions, including three new musicals in which she originated roles. She also co-wrote Results Will Vary, Penn State’s New Student Orientation musical. In the summer of 2019, Forsberg made her Off-Broadway debut in Broadway Bounty Hunter, composed by Tony nominee Joe Iconis. She took a leave of absence the following fall to be in the world premiere of Love in Hate Nation at Two River Theater in central New Jersey. Outside of her major, Forsberg has served as the co-cultural director of the Penn State Filipino Association and was a dancer in THON 2021. She is a proud member of Lion’s Paw Senior Society and Parmi Nous Society. After graduation, Forsberg is moving to New York City to pursue a career in the performing arts.

Visual Arts
Cassidy Sullivan, of Greensburg, Pa., will receive a B.S. in Art Education and minor in special education. In her studies and extracurricular activities, she has focused on social justice and sustainability. In addition to student teaching in the Altoona School District, Sullivan has led an environmental art school, coordinated community art programs and served as a teaching assistant for a college-level environmental science course. She was vice president of the Penn State student chapter of the Pennsylvania Art Education Association and was the College of Arts and Architecture representative for Penn State Climate Action. She has exhibited her work in the Penn State Undergraduate Art Show and the School of Visual Arts’ scholarship recipients’ exhibition, as well as through the Studio for Sustainability and Social Action. After graduation, Sullivan plans to seek a job as an art teacher and later pursue a master’s degree in art education.

Darshika Agrawal, a master of architecture student within the Stuckeman School, was named the recipient of the 2021 Jawaid Haider Award for Design Excellence in Graduate Studies.