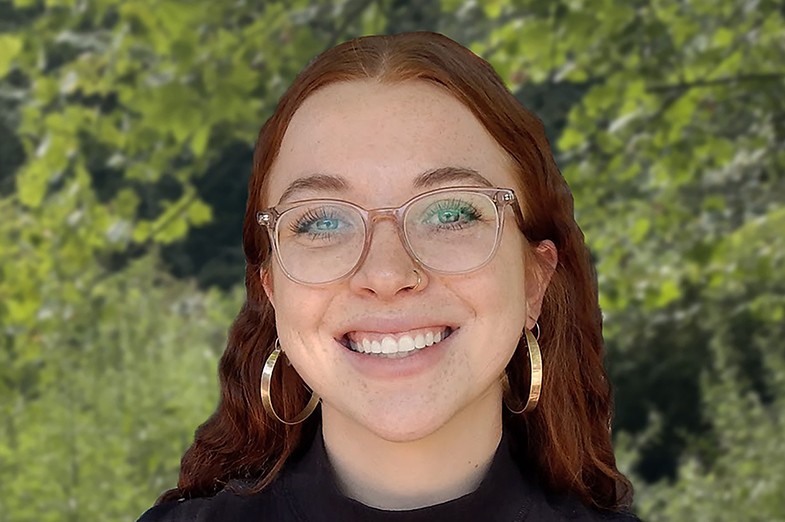 To some, fungi and building acoustics might seem like an odd combination, but for integrated undergraduate-graduate architecture student Natalie Walter, there’s a natural harmony in the relationship.

Funded by an Erickson Discovery Grant, Walter is researching mycelium-based composites and their ability to be used as acoustic paneling.

Walter’s potentially ground-breaking research begins with mycelium, the root of fungi, growing on agricultural plant-based residues. She then adds the mushroom spawn to cardboard, paper and newspaper and tests the results.

“While the mycelium grows through the material, it releases an enzyme that acts almost like a glue,” Walter said. “When we stop the growth, the mycelium mixed with the cardboard is this whole new material.”

Walter conducts the research as part of a team in the ForMat Lab, a research lab housed in the Stuckeman Center for Design Computing that is led by assistant professor of architecture Benay Gürsoy Toykoç.

“This is kind of an out-of-the-box thinking for fungal use,” said Pecchia, who offers mycelium technical guidance for the research.

With the help of Pecchia and the ForMat team, Walter is focusing on how the panels can be used in performing arts venues.

“I’m trying to make an adaptable interior façade, so depending on the style of music or the instruments being played, you would be able to adjust the acoustic absorption,” Walter said.

The mycelium-based composites are biodegradable, cheap to make and environmentally sustainable, according to Walter.

The panels could be used as insulation in walls instead of fiberglass insulation and, Walter said, they could also be attached to the inside of walls in noisy places such as schools, restaurants and offices to absorb sound.

“This material itself has such potential to be used as an acoustic absorber,” Walter said. “It is really exciting to see the possibilities for this work.”

Walter will present her research project, “The Architecture of Decay,” during the 2021-2022 academic year.