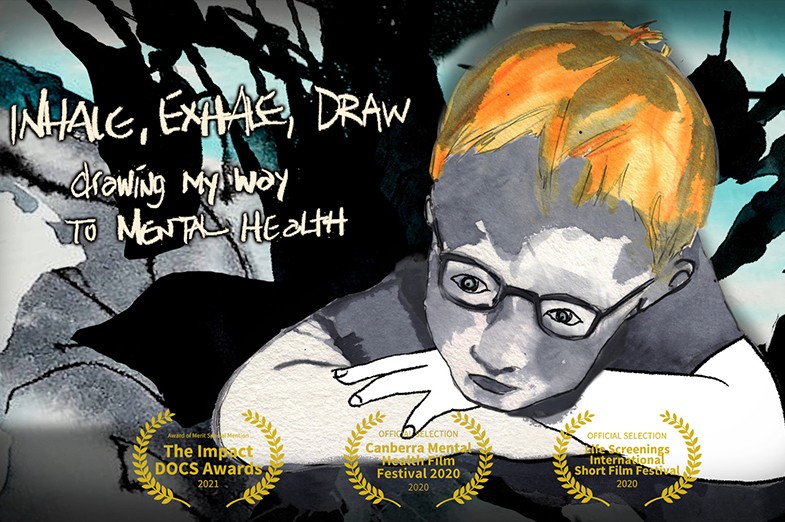 Surrounded by fragments of drawings moving throughout a frame, an animation of a young boy with blonde hair and black-framed glasses reflects on a childhood mired in anxiety and depression.

“Like most people with anxiety and depression, I learned how to keep my secret. I thought the problem was me,” the boy says. “I was different and not good enough. I was weird.”

The animation is one of several in the short film “Inhale, Exhale, Draw,” and the boy is a young William Doan, director of the College of Arts and Architecture’s Arts and Design Research Incubator (ADRI) and co-creator of the award-winning project, which has been accepted to five film festivals.

Running just less than four minutes, the film uses animation and live action images to tell Doan’s story of a life lived with anxiety and depression and how drawing has provided him with a cathartic outlet.

The film is an extension of Doan’s “Anxiety Project,” which was conceptualized by him as a way to share his story through visual and performance art. Four years later, the project has yielded, in addition to the film, 500 drawings and two original performance pieces, which Doan presented around the country as Penn State Laureate in 2019.

It took me a long, long time to share this work and to share my struggle openly and publicly. The main reason why is because of the shame and stigma around mental illness and how, in my case, that is tied to masculinity.”                            -William Doan

In 2018, Doan was named artist-in-residence in the Penn State College of Nursing, which is where the body of his work began to take shape. Since then, he has collaborated with several medical doctors and scientists to create work that has acted as a bridge between medical science and art in a way that he said moves beyond the idea of making medical science “look pretty.”

“The growth of this kind of collaboration is powerful and has evolved to a point where you’re an equal player at the table,” Doan said. “I’m working with a Sono-Oncology team at University Park and Hershey Medical Center and we’re looking at ways in which graphic medicine, comics or visual narratives can create stories that help communicate with patients about a complex medical intervention around cancer. The possibilities are incredibly exciting.”

Cindy White, director of the film and an adjunct research associate in the College of Arts and Architecture, has collaborated with Doan in the ADRI on the “Anxiety Project,” and embraced the opportunity to create work that addresses mental and physical wellness.

“Bill is such an incredibly kind, empathetic and engaging communicator and when he first spoke to me about his projects, it was emotional for me,” White said. “The subject matter can be dark and intense, but this work can create an important framework for conversation that can effect change and have an impact on society.”

As the idea of creating an animated film to explore his work took shape, the need for a film animator became clear. White called on a familiar source for help: her brother.

Alexander White serves as the film’s animator, but the family-style collaboration doesn’t stop there. Cindy White’s son, Leo, provides the voice for a young Doan.

Although Doan welcomes the recognition for the film, he said the focus will always remain on creating art that promotes wellness and encourages people to focus on mental and physical health.

“I hope that people know that it’s okay to tell their story and I hope this helps them to find the permission to tell their own truths,” Doan said. “But I also hope that it makes that link to creative practice and how much that can help to bring balance to your life. Whether it’s music, dance, cooking or, in my case, drawing, a creative outlet can do your brain and other parts of your body a lot of good.”