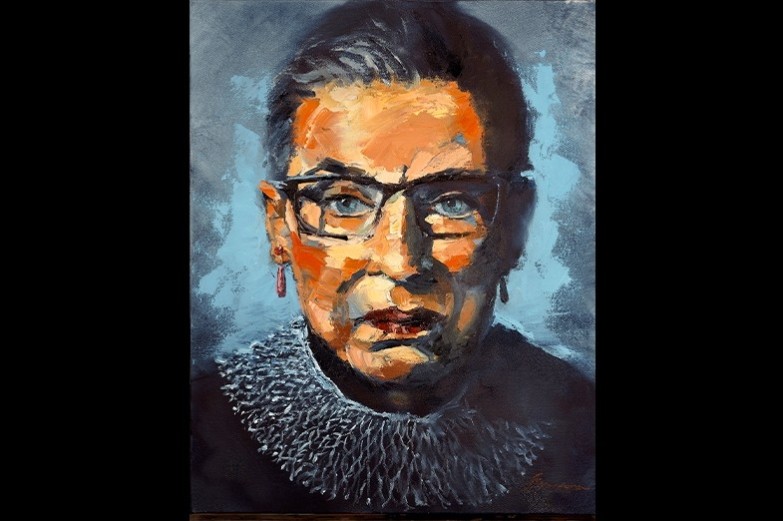 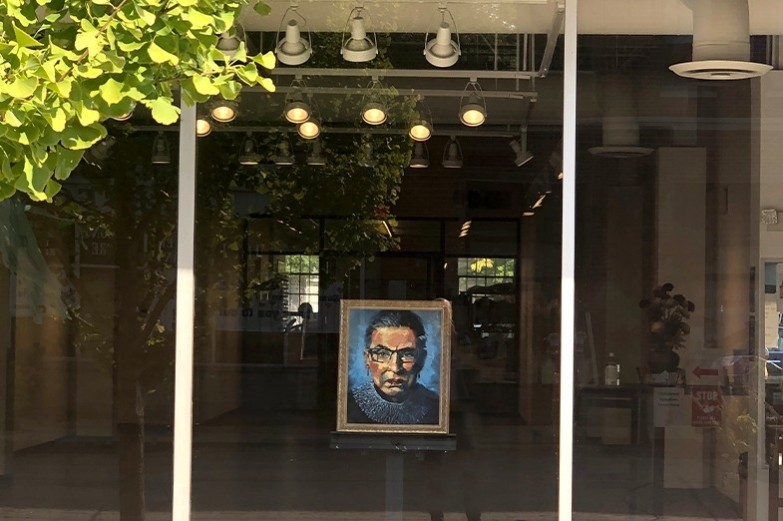 “The Tzaddeket” is a 16 x 20-inch, oil-on-canvas portrait that Brourman said he hopes captures the soul of a woman who had a profound effect on society. The work, which depicts Ginsburg with a stern and confident expression, has amassed thousands of “likes” on social media and has been “pinned” more than 1,000 times on Pinterest.

Applied to an individual who contributed to the fight for justice , the Hebrew word “tzaddeket” is derived from the root word “tzedek,” which means justice or righteousness. Ginsburg died on the first night of Rosh Hashanah, the Jewish new year, which Brourman said added to his drive to paint the tribute to the American treasure.

I was moved by the intensity and fierce determination in her expressions, but I was also moved by her warmth of spirit.” – Paul Brourman

“Here was this person determined to change the course of equality for the better, but she had this ability to bring people closer across political lines and that’s a pretty powerful combination,” he said.

Brourman completed the piece in a nine-hour session in his home in Evanston, Illinois, about 15 miles north of Chicago, where he lives with his wife, son and daughter. He began crafting the painting with a brush, but as the work became more expressive he moved to a palette knife. It’s a technique developed during his evolution as a painter, which includes seven years of studies at Chicago’s Art Institute, multiple workshops and a sabbatical from work to study at the Florence Academy of Art.

Painting is a deep-rooted passion and even a “second profession,” Brourman said as he recounted his journey as an artist, which usually takes a back seat to his day job as chief executive officer and chief creative officer at Sponge, a branding and advertising firm based in Chicago that works with several high-profile clients, such as Hyatt, McDonald’s, Live Nation and Kohler.

“This is definitely a breakthrough piece for me, considering the level of audience it has reached on social media,” Brourman said. “I’ve never had a piece quite break through like this likely because the subject matter resonated emotionally in the moment.”

While his primary focus remains on his career at Sponge, Brourman said he will continue painting with a series of portraits featuring other iconic figures. And although the publicity of his Ginsburg portrait will pass, he hopes the message of her work resonates with a specific audience.

“My daughter has a fierce spirit of her own and she naturally believes she can accomplish or become anything she wants in life with hard work, effort. And I want her always to have that uninhibited view,” Brourman said. “While honoring Justice Ginsberg speaks volumes to my daughter and how we want to raise her, it also instills in my son that he can confidently support and celebrate women in roles at any level while pursuing his own path with the same passion.”

“The Tzaddeket” is on display at the Evanston Art Center. To explore more of Brourman’s work, you can visit his website.

The THON website recently published a new virtual gallery showcasing five previous logos from the annual event as well as the designers responsible for them.

Meet Kimi Mate, the student designer behind the THON 2021 logo