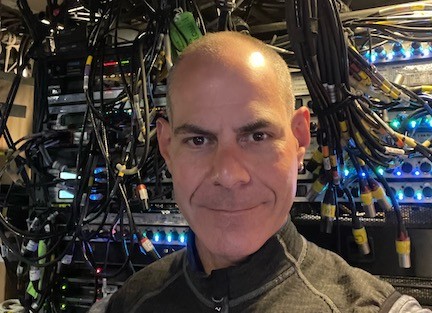 Mike Hyman, who received his undergraduate degree from Ithaca College, chose the Penn State School of Theatre for his graduate education because it offered hands-on training, the opportunity for him to teach classes, and an attractive financial package. He is a 1996 graduate with an MFA in lighting design.

His original goal was to be a teacher and, starting his second semester, Mike taught an intro to lighting class. He supervised shows at night and taught during the day, loving the interaction with the students. In addition, while at Penn State, Mike got his union card working as an electrician at the Pavilion Theatre during the Centre Stage summer season

What he learned while teaching and that union card ultimately set Mike on his path.

Looking to earn some money, and with the Atlanta Olympics looming, Mike reached out to the IA local in Atlanta after seeing a notice that they were looking for labor for the summer. If you watched any of the Atlanta Olympics, it is likely that you saw some of Mike’s work. He worked rigging jobs and he worked for the decorator, hanging fence banners, laying carpet, and doing a lot of carpentry. He called it his “survival job” as he sorted out his next steps.

After the Olympics, Mike went back to Penn State to pack up his belongings and make his way to Seattle. He had a friend working as the house carpenter at the University of

Washington road house who had work for Mike. Along the way, Mike stopped to pick up Tyler Stillwell, a fellow 1996 graduate (MFA Acting), who also wanted to give Seattle a try. The two caravanned across the country, sleeping in gas station parking lots along the way.

Mike’s goal now was to tour. He had decided that full-time teaching was not for him, but it was his experience at Penn State that taught him how to work with a team. This would serve him well for the next steps in his career. While working at the University of Washington, he was recommended to replace the head electrician on the Man of La Mancha tour starring Robert Goulet. The show was on its third stop of a 10-month tour and now Mike was the head electrician. It was his first tour, he was the department head, and there was a lot to learn. He was always good at remembering names, which came in handy over the next six years of touring. It engenders a lot of goodwill when the head electrician of a tour comes into a road house and can remember the names of the local crew.

After five or six years on the road, Mike was ready for something new. After a brief return to Seattle and getting a taste of a Seattle winter, he got into his car and went back the other way, to New York City. Mike says that he was not really sure how to start, but a call to the owner of a lighting/rental shop got him a job offer working on moving lights, scrollers, and dimmers. A few days after that, he heard from a contact wanting to know if Mike would take over for him on the Broadway production of Saturday Night Fever.

Shop by day. Show by night. Lots of exposure and meeting more people. He went out on tour one more time with Saturday Night Fever, after which it was time to settle in NYC and stop living out of a suitcase. Also, he notes that the financial dynamics of touring had changed. No longer could you live off of the per diem with the increasing cost of hotels and housing.

Mike’s first Broadway show from start to finish was Gypsy, starring Bernadette Peters, at the Shubert Theatre. He would then move on to Monty Python’s Spamalot, starting with the show out-of-town and continuing through its full five-year run on Broadway. His credits are many, including: The Addams Family, The Play that Goes Wrong, The Band’s Visit, Death of a Salesman, Mike Tyson’s Undisputed Truth, Motown, Exit the King, Living on Love, 42nd Street, and Sunset Boulevard. He likes shows with lots of cues: “The busier the better.”

Mike credits Penn State with teaching him how to work with people, through his own teaching and his work with various crews. He tells a story of how Chuck Firman (’67 MFA), lighting faculty at Penn State at the time, gave him a design problem to work on in his first year.  Mike said he was given the tools to find the answer but had to find that answer on his own. This lesson taught him how to learn. And this lesson translated to working with designers and figuring out how to bring their visions to life on stage.

Mike’s next act? Busy again as the pink contract head electrician on Thoughts of a Colored Man by Keenan Scott II, directed by Penn State School of Theatre alumnus and professor Steve H. Broadnax III and currently running on Broadway at the John Golden Theatre.

Interviewed by Allison Lee (’95 BFA Stage Management), current president of the School of Theatre Affiliate Program Group (Theatre Alumni Group). “Spotlight on Alumni” is a project of the SOT APG.