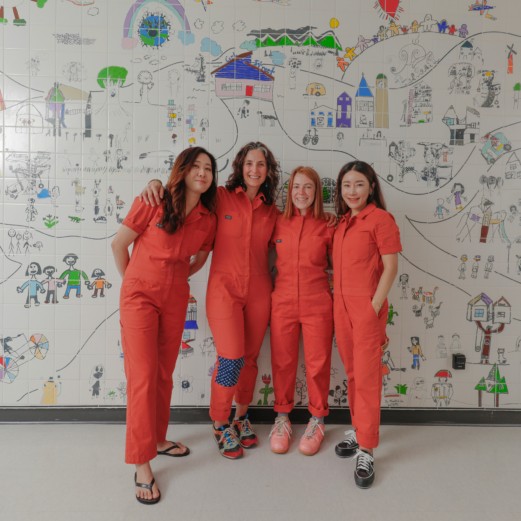 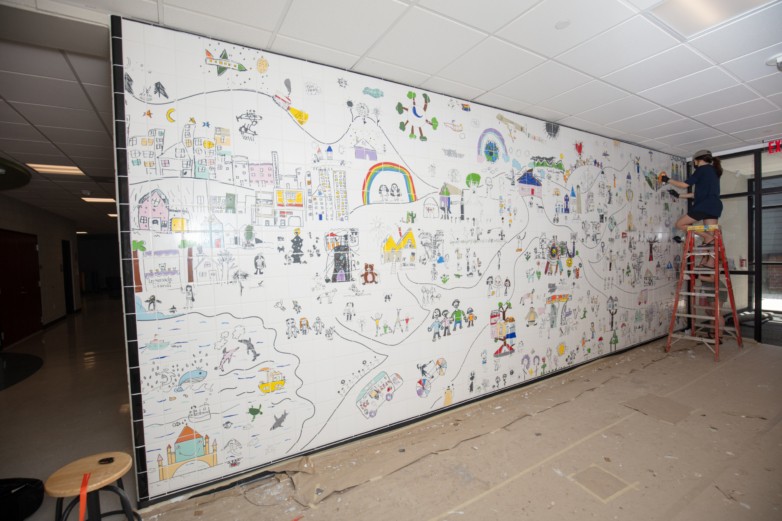 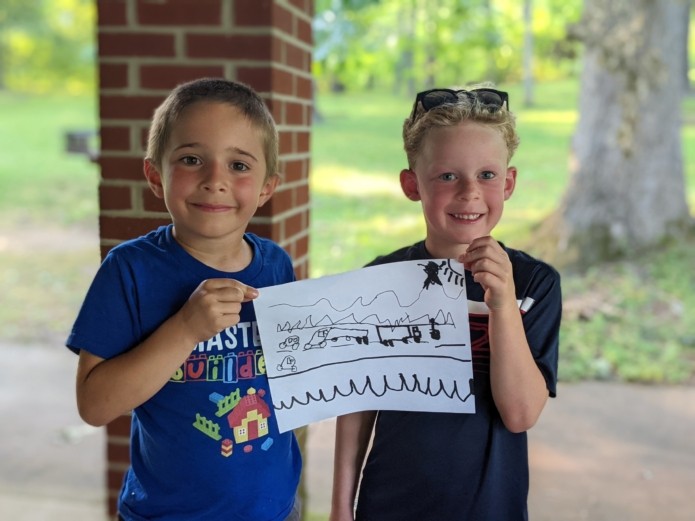 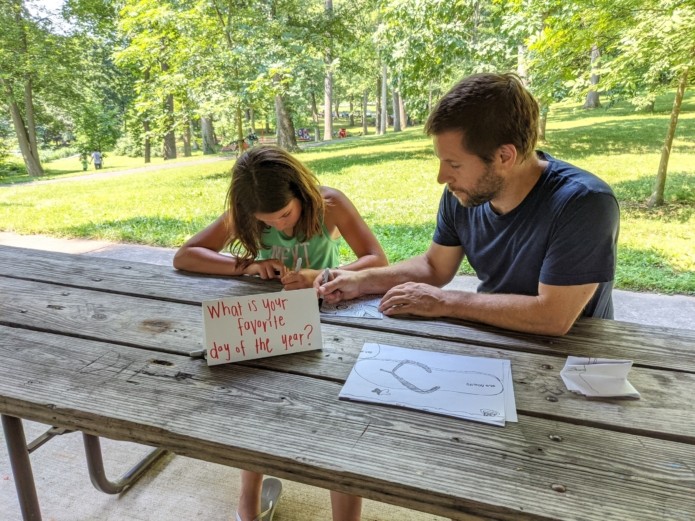 Children’s hopes and dreams for their future, captured in drawings made during the early months of the COVID-19 pandemic, are highlighted in a new mural at Corl Street Elementary School, spearheaded by Shannon Goff, associate professor of art in Penn State’s College of Arts and Architecture. The mural will be revealed during an open house, Saturday, Sept. 17, 1-3 p.m.

The collaborative mural project, titled “Future Forward,” features a curated selection of more than 400 drawings by Corl Street students that were cut, collaged, scanned, digitized and transferred to almost 900, 6 x 6 in. tile. Goff conceived the mural as a sabbatical project, and it ultimately took four years to complete, with a team of students (now alumni) and State College Area School District art teachers. It was funded in part by a College of Arts and Architecture Faculty Research Grant, the Center for Pedagogy in the Arts and Design and the Corl Street Elementary PTO.

Goff developed her project proposal well before the COVID-19 pandemic, but said her ideas for the mural changed when the world shut down in March 2020.

“The lockdown grounded the project in a new way,” explained Goff, the parent of two students at Corl Street. “It begged the question: ‘What is whispering in your ear about the future of the world?’ And so we began a distanced conversation about world building and what kind of world we want to live in post-COVID-19.”

‘Future Forward’ served as a vehicle tethering together the schoolchildren no matter what form of learning they were pursuing, be it in person, remote or virtual.”
-Shannon Goff

Thanks to a series of curated storybooks and drawing prompts – ranging from “draw a person with an animal face” to “draw how you feel” – Goff was able to collect hundreds of drawings during the 2020-21 academic year. Children drew at home, in art class at school and at an open session at Holmes-Foster Park.

Stallings, the parent of two Corl Street students, taught at the school at the beginning of the mural project.

“I found that being an initial contributor to the ‘Future Forward’ project, as an art teacher and parent, was helpful when I was moved to another school because it kept me connected to the school where both of my own children are learning and growing,” she said. “What better place would I want my own children than where creative imagination is not only being explored and encouraged, but shared with the whole community.”

After the labor-intensive process of preparing the tiles, which included printing the drawings on ceramic decals and applying them to each tile by hand, the team was faced with installing the tiles on the 24-foot wall inside the school. Graef, who trained to be an electrician before coming to Penn State, assured Goff she could handle the job.

“Anna became the sensei, and I was the student. Working together, the team installed the mural over 90 hours in one week in summer 2022,” Goff said. “I had notions of what this might look like but never quite imagined the collaborative effort that yielded the glimmering jewel that now graces a once dull and under-recognized hallway space.”

Goff said her role as both mother and artist compelled her to engage the Corl Street students through art while making memories with her own kids.

“There is something so powerful about the timeless yet fleeting nature of a children’s drawing and concretizing it through the ceramic firing process,” said Goff. “’Future Forward’ will give permanence to student artwork; harness student creativity in response to the current global context; and give voice to student narratives of hope, questioning and wonder.”

“Körperkammer" is a collaborative sculpture created by an international group of women artists to explore the body's relationship with iron.