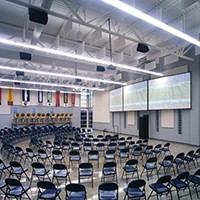 Built in 2004, the O. Richard Bundy Blue Band Building consolidated the Penn State Athletic Bands into one facility. Before the building was constructed, instruments were stored at the Music Building or in trailers, uniforms were in the basement of Music Building I, music and the band offices were either in Chambers Building or in Music Building II. The Building would be named the O. Richard Bundy Blue Band Building upon Bundy’s retirement in 2015.The building features a 9,000-square-foot practice area, faculty offices, storage space for instruments and uniforms, and display cases for the band’s historic memorabilia.